If you are worried about traffic jams, the car PC by iWave System Technologies is the perfect infotainment for you to enjoy the drive back home after a hard day of work -- VANISHA JOSEPH 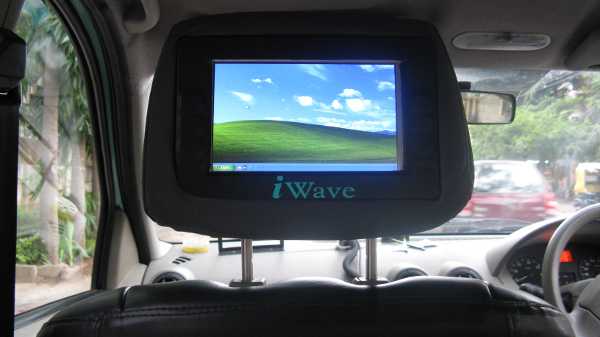 JANUARY 2010: Listening to music on iPod or music player while driving through traffic-choked roads is a daily ordeal for most office goers. Some wish they could have finished their pending work, while others yearn for some entertainment to ease their stressed out nerves. To spice up the drive, iWave System Technologies has introduced a car computer—Intel’s Atom-based ultra-mobile computing platform—which combines in-vehicle entertainment—music, movies and games, along with the Internet surfing facility.

“People spend 20-30 per cent of their time in traffic, which could otherwise be utilised for meetings, Internet surfing, email checking or entertainment. The car PC serves all these purposes, and will soon become a big name in the car infotainment technology,” says M.A. Mohamed Saliya, MD, iWave System Technologies.

The innovation
Running on Windows (XP/CE6.0/Vista/7beta) operating system, iWave’s car PC is a full-fledged PC within the car’s headrest. “A 17.8cm (7-inch) colour LED backlight display, with touch controls, has been built into the standard headrest, and customised for vehicular operations,” adds Saliya.

The device has two USB 2.0 ports to enable users to plug-in broadband wireless Internet. It is equipped with a 2-megapixel camera with recording facility, allowing passengers to use the video call facility. It also has an in-built GPS for navigation and mapping.

Sleek shape
As the car PC is fitted within the car headrest, it uses Q7 Atom CPU module motherboard, which gives it a complete functionality. “A motherboard is usually more than 25 cm in size. However, the Q7 Atom CPU module shrinks the size of the product to smaller than 7.6 cm. This module is apt for mobile and battery-powered applications and could be easily integrated for hand-held and ultra-mobile computing applications like the car PC. The module also provides a rich set of high and low-speed interfaces,” says R. Immanuel, project lead, iW-Rainbow G6 (the unit dealing with Atom-based solutions), iWave System Technologies.

Storage capacity
The device also addresses the storage issue usually faced by small-sized PCs. “With smaller gadgets, the data storage is usually an issue. Besides, storage needs space and adds to the weight. But the car PC offers a 1 GB DDR2 on-board memory and 16 GB of solid-state drive (SSD) storage, expandable to 64 GB. The use of data storage device that uses solid memory helped us reduce the weight and size of the gadget, making it a perfect fit for the car headrest,” says Immanuel.

Though the company has not revealed the cost of the car PC, they said the price would be competitive compared to the standard DIN-based car PCs available in the market. iWave System Technologies plans to market the product through partnership with original equipment manufacturers (OEMs), automotive customers and independent software vendors (ISVs). “Leading cab companies are evaluating the car PC to offer free entertainment during long commutes and Internet access as value-added services,” says Saliya.

[stextbox id=”info” caption=”Innovation expressway”]• This car PC has a two-megapixel camera and in-built features of WiFi, GPS
• The motherboard has been shrunk to Q7 CPU module, making the PC very compact in size
• The car PC consumes one-fifth the power by a laptop
• Expected to be low-cost compared to the available DIN-based car PCs[/stextbox]

Development challenges
It was six man-years of effort by iWave to develop this innovative device. And, it wasn’t a smooth ride. “We faced numerous challenges like BOM optimisation, thermal management and finding partners for printed circuit board (PCB) fabrication of the Q7 CPU module PCB that involves the complicated HDI technology not yet available in India,” says Saliya.

While BOM optimisation was essential to maintain the price and performance balance of the gadget having over 100 major components, thermal management was crucial to prevent the gadget failure.

Elaborating on the thermal management hurdle, Immanuel says, “A car PC needs a proper heat management, otherwise functionality of the device gets affected. The temperature inside a car is already high. Besides, the excess heat generated by the headrest made up of leather is another problem. To achieve thermal management, we went in for special thermal conducting coated heat spread materials.”

The initial drive
But how did this innovation process begin for iWave? The company began focusing on design services in May 1999. Their first customer project was the design and development of a complex reference board based on 32-bit RISC processor. Initially, they faced hurdles like any other young and inexperienced team. However, two-three years of hands-on training proved a boon for iWave. Not only the young engineers mastered the technology, but also fine-tuned the focus of the company to meet the industry needs. About 30 per cent of their 131-strong engineering resources, which amounts to 200 man-years, were channeled towards R&D from 2004 onwards.