VFLYX Drone at Your Service

The parent firm, Xboom, started in 2015 with focus on addressing safety and security products. It eventually started exploring the next level into surveillance using drones. Introducing VFLYX in 2021, the firm has now ventured exclusively into drone sales and operations to cater to applications such as land surveys, analysis, and inspections. Xboom recently announced three million dollar funding for VFLYX to improvise the manufacturing and testing facility in India.

One of their latest launches is an agri drone that can fly up to eighteen minutes with larger spray coverage area compared to what is available in the current Indian market. 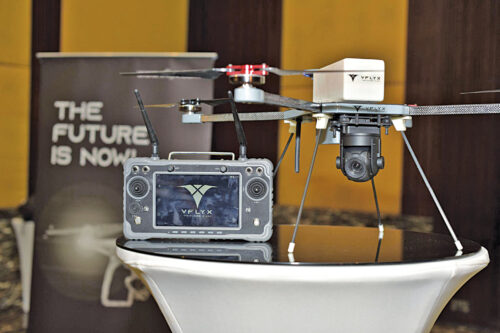 VFLYX drones are capable of giving a well-balanced performance matrix with flight time of up to fifty minutes, maintaining high speed with utmost stability. “This was achieved by improving the design factor, reducing the overall weight of the drone by 20% to 1.55kg and using the battery of high charge capacity of 13,000mAh,” says Vishal Saurav, CEO & Co-founder of VFLYX.

With one of his clients enquiring drones operating indoors for inventory management, his team took up the challenge. “Our drones weren’t fit for inside operation with respect to GPS signal requirements for navigation. We overcame this challenge by implementing an inertial measurement unit to get the position and direction of the drone, eventually turning it into a successful project,” Saurav adds.

However, Saurav feels India has too many strict regulations for registering and licensing drones. He says, “The number of steps in formalities are high and even the permission to fly is very limited. Though it is being revised largely now, it was one of the major challenges. With expansions and more firms coming into play, I believe India would relax several restrictions and promote easy operations.”

Currently operating on a dual model, the firm sells drones and also renders drones as a service (DAAS).

Saurav says this learning came after they realised that many companies were hesitant to indulge in hefty one-time investment on drones. “We turned to providing drones as a service on a rental basis, be it monthly or a plug-n-play model for those who are not looking at upfront high investments. We still cater to those who are open to investing in drones. We found the new model taking off with a speed and increasing our revenues, giving us a deeper penetration into the market,” he elaborates.

Sauvrav expects wireless charging drones and drone pods to be the next big thing for drone technology. “It’s very important to upgrade your skills and keep pace with the trends and expectations of customers, if you want to be in the game. We are working towards creating economic payload drones for logistics to foster medical and e-commerce growth in near future,” he adds.

With the funds from Xboom, the firm has plans to import the essential components to ensure a smoother supply chain. VFLYX, the bootstrapped company, is now planning to expand their talent pool, with focus towards hiring well-trained drone pilots on a large scale. It is also looking for channel partners in around fifteen states in India.

Convert Your Bicycle To E-Bike With Easykit