AI-enabled security cameras can send alerts when an object is missing from its usual place, or a new unknown object has been lying around for too long. Monitoring officers can check whether the activity is a threat or not.

Increasingly complex crime scenarios and other security threats have led to the widespread use of CCTV cameras and video surveillance systems in commercial, residential and all other places that need monitoring. But for mission-critical applications that require reliable scrutiny constantly, these traditional security cameras do not suffice.

Main issue with these cameras is that limited object detection puts the onus on human operators to be attentive to the recording for preventing intrusion and other unwanted incidents. Otherwise, the observations can only be made after the mishap has already occurred. This necessity of automation has given rise to cameras and surveillance systems that utilise artificial intelligence (AI) and machine learning to provide real-time alerts, even in harsh weather conditions, in case of actual emergencies. In most models, features like voice and facial recognition, integration with assistants like Alexa, gesture control are also enabled.

Based on the scenario, rule-based AI systems or behavioural learning approach may be required. In rule-based AI, predefined instructions are set by the programmer for such purposes as defining restricted areas and varying what should be considered unsuspicious for a particular time of the day. Alerts in the form of notifications and video clips are sent if the rules are violated. Whereas for complex or busy environments, behavioural analytics is preferred as it uses self-learning based on its perception of environment. 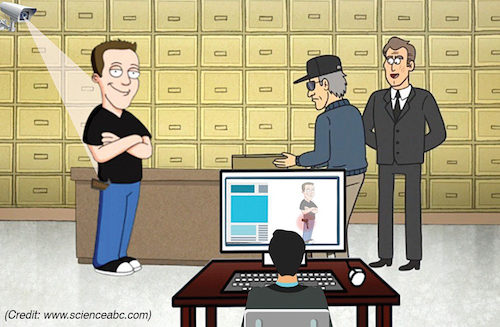 Broad categorisation of objects is done based on characteristics like size, shape, colour, motion, angle, and matches with deep learning algorithms initially, which narrows down with usage over time to precisely differentiate unusual from normal. For example, alerts can be sent when an object is missing from its usual place or a new unknown object has been lying around for too long. Monitoring officers can check whether the activity is a threat or not. There are numerous companies like IntelliVision, Clarifai and Valossa that provide AI-based video analytics and software for smart cameras.

These abilities make AI-based cameras particularly useful for safeguarding national and international interests by aiding the security forces in making smart and strategic decisions in times of threats like armed aggression and terrorism. For instance, the recently launched AI camera SIP-2HDG-W40 by Secureye has been deployed by national security forces in a region in North India which can start recording automatically when required.

It comes with a 2MP Sony IMX307 Starvis CMOS sensor and has an infrared range of thirty metres. Salient features include intelligent motion detection (like tripwire to detect entry and exit or heat mapping to identify hotspots), two-way communication via intercom, support for both 4G and Wi-Fi connectivity, inbuilt as well as cloud storage, IP66 waterproof rating. Secureye Falcon app available on both Android and iOS enables remote monitoring. With smart dual light source, it can record HD (1920 x 1080 pixels) or SD (640 x 360 pixels) footage with a frame rate of 15fps, even in dark environments 24/7.

The result is a faster analysis and better protection of the assets spread across wider geography at a low cost. AI cameras also find applications in smart cities like in smart homes and retail stores. Companies worldwide are developing security systems with AI capabilities. Wyze Cam v2 indoor smart home camera, for example, can detect motion in both live stream and playback video modes, send notifications if it senses smoke or carbon monoxide.

‘AI Guardman’ security camera designed by Japanese telecom NTT East and startup Earth Eyes in 2018 helps Japanese shop owners to note potential shoplifters via a connected app. It uses open-source technology for object detection in live video stream scanning for this purpose. Walmart is using AI technology from Ireland-based company Everseen for its cameras and computers to monitor checkouts and prevent losses caused due to such reasons as theft, scanning errors, fraud, and so on in more than a thousand stores.