This article discusses the different paths taken by the member countries of the European Union towards digitalisation, which have led to massive growth and progress of people as well as technologies.

The member countries of the European Union have taken different paths to digitalisation because of differences in their circumstances. Here are five good examples from Europe.

The Czech Republic has a booming young IT scene. And it became active in early 2020 when the Czech government wanted to spend sixteen million euros on an online shop to sell highway permit stickers. In protest, hackers programmed the type of shopping platform required within a few days free of charge.

Today, in this former centre of heavy industry, digitalisation accounts for an above-average share of gross domestic product compared to other European countries. Informatics is a common subject at university, and out of love for their country, many Czechs would rather find their own tech startups here than emigrate. They include several world market leaders.

Cybergym Europe simulates cyberattacks in an old house in Prague. Firms from all over Europe send employees to this digital exercise ground, where they learn how to respond to hacker attacks.

The world’s most commonly used 3D printer also stems from Prague. Prusa Research is considered the fastest-growing tech firm in Central Europe. Every month the printer farm sends thousands of 3D printers all over the world. The machines print printers day and night—they basically reproduce themselves. The printers have remained an open source, which means all the programming code is freely accessible.

In Estonia, it only takes a few clicks to register a change of address, apply for social benefits, update your car registration, or complete other administrative chores for which you would often have to stand in line for hours in other countries. In all, 99 per cent of all administrative tasks can be completed online.

If new parents are more relaxed in Estonia than elsewhere, it may be due to the local administration. In e-Estonia, as the Baltic country likes to call itself, a baby is immediately registered with the authorities by the hospital at birth. Applications for the birth certificate, health insurance, children’s allowance, and other benefits are automatically submitted.

One reason for the advanced state of digitalisation in the Baltic country is to be found in its low population density. As the distance to local authorities is usually considerable, Estonians began working on digital solutions very early on.

Today, authorities and companies offer over 3,000 online services. To use them, you only need a citizen’s ID card. This is simultaneously used as an identity card, driving licence, and health insurance card. Estonians have even been able to vote online since 2005. There are only three occasions when a trip to a government office is required—marriage, divorce, and property purchase.

The smart factory is central to Industry 4.0, the German Federal Government’s high-tech strategy for the future. It is not only machines and products that are networked in the smart factory; the factory floor of the future is also digital.

Cameras and sensors monitor the automated manufacturing process, and robots intervene and rectify faults in an emergency. Drones fly through the factory and replenish supplies of material. If the warehouse is empty, the software automatically orders more. Workers are nowhere to be seen. This is what the smart factory of the future looks like, and it has already become a reality in some German companies today. Machines, software, and robots are linked together through superfast Internet connections. They communicate, learn from one another, and identify products with the aid of RFID chips.

However, Industry 4.0 is not only about machines manufacturing products autonomously and automatically. The fourth industrial revolution also says farewell to industrial mass production for anonymous customers. Instead, individualised products can be made to order in accordance with the customer’s needs. When an order is received at the factory, the software programs the production line. Thanks to artificial intelligence, the systems learn something new every time they process an order. 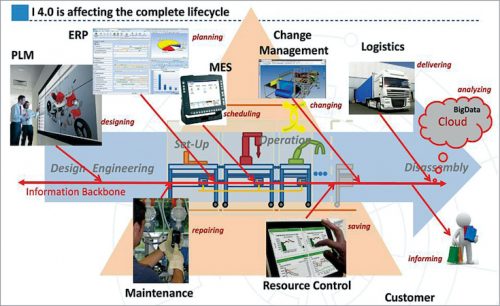 The latest German technology for the smart factory is the digital floor. Equipped with electricity and data cables, it can supply and control the robots. That does away with the need for powerful batteries and complex positioning systems. Manufacturing systems can also be controlled through the floor and production lines modified as required. All the components in the smart factory are connected, flexible, and mobile. Only the factory building itself is immovable—for the time being at least.

Fast Internet connections are the basic prerequisite for digitalisation. With coverage of practically 100 per cent, Luxembourg has by far the best-developed broadband network in Europe.

The small Grand Duchy lands in second place—behind Singapore—in the Digital Readiness Index published by network specialists, Cisco. The ranking of 141 states shows how well countries are prepared for a digital future.

Luxembourg comes first even in the ranking of the best framework conditions for startups. The government of Luxembourg supports new companies and has a dynamic venture capital market.

Luxembourg has invested a large amount of money in its digital infrastructure to ensure that access to broadband Internet is universally available. Coverage with especially fast Internet offering download speeds of over thirty megabits per second is 96 per cent. This makes Luxembourg number one in Europe; the European average is 74 per cent.

Luxembourg achieves an above-average score when it comes to mobile Internet access. There are Wi-Fi hotspots everywhere in public spaces. This means citizens can go online at all times without using up their mobile data contingent.

A virtual hospital and electronic patient records: Finland’s e-health system is one of the most advanced in the world.

Finland has long led Europe when it comes to digital technologies. Following mobile phones, online banking, and electronic government (e-government), digital health has now become the largest high-tech export sector. Prescriptions for prescription-only medicines have been issued electronically since 2010, and electronic patient records have now been used in the Nordic country for over twenty years. They store health data, medical diagnoses, and prescriptions. As a result, patients and doctors who treat them can view blood values or previous illnesses from any location.

If you come from a sparsely populated part of the country and have a health problem, you can visit a virtual health village. The platform offers serious information online and guides users through the Finnish healthcare system. Patients can talk to doctors online and arrange appointments.

The latest sensation in the field of digital health is FinnGen, the national genetic research project launched in 2017. Genetic data is being collected from ten per cent of all Finns. The goal is to make changes in genetic material visible and prevent diseases.

This article has been reproduced with permission from Deutschland Edition, July 2020