ALL 5* rated fans fail in the crucial test of "air delivery", except 1 brand -- Article by Consumer VOICE (www.consumer-voice.org)

In India, ceiling fans are the largest end-use appliance in the residential sector. For so many of us from before the ‘coolers and air conditioners’ era, the ceiling fan was as ubiquitous as the wall—or the ceiling—in the house. It was a generic product that we did not think twice about. It was just, well, there (unless you were a poet or a writer who could conjure up many alternate visions for the ceiling fan whirring on a drowsy Indian summer afternoon). Who really compared the performances of ceiling fans?

Come to think of it, a comparative test on ceiling fans may seem to be a waste of resources and time, since it would have a foregone conclusion. After all, isn’t it a standard product serving a very basic function? Yet, just to give an example, with the millions of ceiling fans sold annually in India, think of the huge amount of electricity being consumed and think of the potential savings in electrical energy that can be realized with energy-efficient motors.

The tests conducted by the Consumer Voice team only considered ceiling fans with five stars (energy-efficiency rating assigned by Bureau of Energy Efficiency, BEE, as per which five stars denote highest efficiency and one star the least). Thus, with energy efficiency as the basic starting point, the tests evaluates 10 leading brands of ceiling fans on parameters that decode their goodness in terms of performance, quality and safety.

The test program was based on IS: 374–1979 – specifications for electric ceiling-type fans and regulators. The standard sizes of ceiling fans covered here are 900 mm, 1,050 mm, 1,200 mm, 1,400 mm and 1,500 mm. The test program, though, was limited to 1,200 mm fans – the most commonly used fans – with BEE ratings of five stars. These fans are the regular, non-decorative models with three blades. The tests were conducted at an NABL-accredited laboratory.

[stextbox id=”info” caption=”Protection against Electric Shock”]All the fans were so constructed and enclosed that there was adequate protection against accidental contact with live parts.[/stextbox]

The following report will tell you a thing or two about important criteria like air delivery, service value, power consumption and electrical and mechanical safety. We also considered parameters like silent operation, net weight, and design.

[stextbox id=”info”]The fan, in fact, does not lower room temperature at all; it works by creating a breeze that makes the room feel more comfortable. It helps to circulate the air properly and rotate the air from the top.[/stextbox]

In April this year, Energy Efficiency Services Limited (EESL), a JV of PSUs under the ministry of power, launched a pilot project called National Energy Efficient Fan Programme in Andhra Pradesh. Under this project, two energy-efficient fans are provided to each consumer at Rs 60 a month per fan on EMI basis. The EMI amount will be added to the consumer’s electricity bill for two years.

With the usage of these 50 watts, BEE 5-star-rated ceiling fans, it is estimated that a consumer’s electricity bills will reduce by about Rs 700 to Rs 730 per year. Therefore, the cost recovery of purchasing these fans is less than two years. These fans are 30 per cent more energy-efficient as compared to conventional fans, which range from 75 watts to 80 watts. 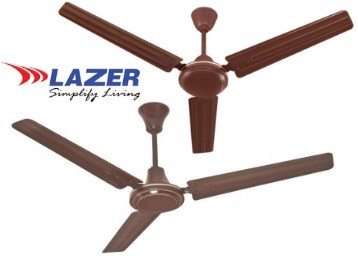 Let’s take a look at the test results and