We are moving to a world which wants everything small except profits. We have small computers on our wrists, which we smartly call a smartwatch. Then we have the smart glasses, which somehow incorporate wireless transmitters in the sleek frame. This trend is spreading throughout technology. We have reached a level of fabrication, never seen before. We seem to want smaller processors, smaller chips, smaller devices, but we somehow seem to misplace our keys everyday.

Suppose you want to buy a system, that could efficiently work multiple apps at the same time. You could either go for a desktop with multiple units, with separate central processing unit (CPU), monitor, keyboard, mouse and other peripherals. However, you have the other nifty option of going for a laptop. It is light, it is portable and the best of all, it does all that you want it to do. Is this really a competition?

We seem to go for smaller devices. These can be handled easily, at our own leisure and get the job done. You had the option to go for the desktop, but you went for the laptop. It performs the same tasks with the added benefit of a smaller form factor. All the parts inside a desktop have an even smaller versions of them, build with portable devices in mind. These are similarly efficient and look sleek as well. Assemble them together and you have a sweet deal with a personalised machine.

How small is small

The below infographic from Lam Research has a very interesting take on the size of technology at present. 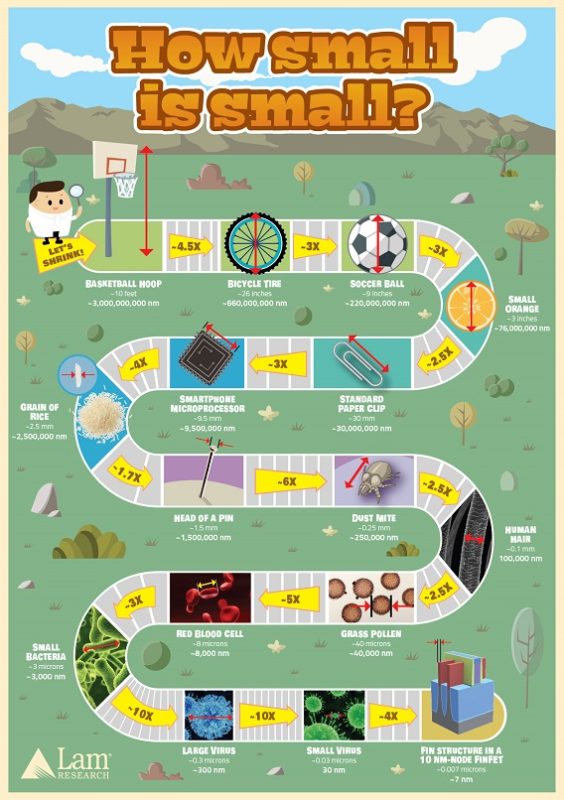 How is it inside the chip?

One of the most astounding aspects of semiconductor chips is their incredibly small scale. Practically measured in atoms, some feature dimensions are on the order of nanometers (nm) – that’s one billionth of a meter and more than 10,000 times smaller than the size of objects that can be seen with the naked eye.