Lekhana N.P is an MTech Student from Dayanand Sagar college of engineering. She is highly passionate about digital image processing.

Glaucoma is one of the second principal eye disease in the world, if not treated legitimately may prompt to permanent blindness. There are no particular symptoms for this disease; it is seen by loss of side vision. It is a moderate dynamic decay of retinal ganglion cells (RGC) and their axons, bringing about a distinct appearance to the optic nerve head (ONH), frequently called cupping. Because of this cupping, the cup area increments and causes loss of side vision. Various modern methods are being developed currently for the efficient  glaucoma detection to name them, OCT, HRT.

Usually to detect Glaucoma, optic nerve assessment is performed by a trained glaucoma specialist or using specialized expensive equipment such as the OCT (Optical coherence tomography) and HRT (Heidelberg Retinal Tomography) systems. However, optic disc assessment by an ophthalmologist is subjective and the availability of OCT/HRT is limited because of the cost involved. If the 2D fundus digital image is taken by a fundus camera, which photographs the retinal surface of the eye, then in comparison with OCT/HRT machines, this process using the fundus camera is easier to operate, less costly, and can assess multiple eye conditions.

Many researchers have utilized the fundus images to automatically analyze the optic
disc structures. Couple of drawbacks exists in the modern glaucoma diagnosis detection methods such as requirement of trained personnel, specialists for the operation of the equipment, cost involvement is very high, which is not a feasible factor in the rural areas & the poorer section. To overcome these issues, we can use a novel algorithm for automatic detection of eyes affected with glaucoma using image processing filtering & transformation technique. Fuzzy c means clustering (FCM) and support vector machine (SVM) algorithm is used. Matlab could be the software platform that is being used. This type of algorithm can be used to identify all types of glaucoma.

To develop the algorithm for automatic glaucoma detection, the first essential step is to obtain the effective database so, High Resolution Fundus image database are collected from www.optic-disc.org database images and online databases including DROINS & DRISHTI GS Database.

In color retinal images, Optic disc appears to be the brightest part having pink or light orange color and is Region of Interest (ROI). ROI is the region around the optic disc that must first be delineated, as the optic disc generally occupies less than 5% of the pixels in a typical retinal fundus image. While the disc and cup extraction can be performed on the entire image, localizing the ROI would help to reduce the computational cost as well as improve segmentation accuracy. The ROI from all images is crop down and is resized to 256 × 256.

Extraction of optic cup and disc

To suspect glaucoma, evaluation of CDR is one of the key elements, which is calculated by the extraction of optic disc and cup. Firstly, the original colored fundus image was cropped and resized. In next step, blood vessels are removed from the image. For this morphological operation such as the dilation, erosion, is performed. Dilation causes objects to grow in size by adding pixels to the boundaries of the object in the input image. Image is dilated by using the structuring element “DISK”. This dilation results in filling all internal gaps and lighting blood vessels but increasing the size of optic disc which will affect the CDR. For this after dilation the image is being eroded by same structuring element and size. Erosion is done to contrast the boundary of the object. The result of this operation has a smooth image without any blood vessels.

The area is calculated by counting the number of white pixels after that, the area of cup is divided by the area of disc to calculate CDR. Structural changes in glaucoma can be detected with different imaging tools, including optical coherence tomography (OCT).

The software tool that is used for the project work is Matlab 17 with Simulink modeling & the Image Processing tool box & the same thing is going to be implement in Scilab, LABview.

Above mentioned algorithm is achieved using the following steps:

The algorithm is developed, note that in each platform, 6 different blocks are being used for computational purposes & for the glaucoma detection. 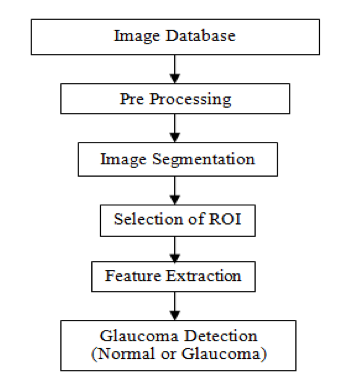 In block 2 the database stage is pre-processed.

Block-4 stage explains the region of interest (ROI)selection i.e., ROI must be found out.

In Block-5, novel algorithms are written for the disease detection.

In block-6, the classification using several types of novel algorithms is done.

Finally, the result is obtained and will be presented in the stage-6, which concludes the effectiveness of proposed methodology developed by us.