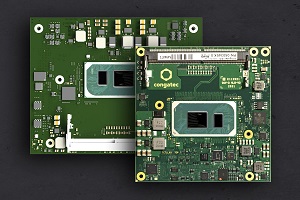 congatec, a leading vendor of embedded and edge computing technologies has announced the launch of 12 brand new Computer-on-Modules in parallel with today’s Intel IOTG (Internet of Things Group) launch of the 11th Gen Intel Core processors.

“One of the most impressive features besides state-of-the-art PCIe Gen4 and USB4 support is the massively increased bandwidth of the new Intel Iris Xe graphics. The performance has nearly tripled compared to predecessor modules based on 8th Gen Intel Core processor technology. This opens up a multitude of new opportunities in the graphics intensive medical imaging and immersive digital signage sectors, as well as in the industrial machine vision and AI based public safety sectors where capturing and analyzing several video streams in real-time is critical for object recognition,” says Gerhard Edi, CTO at congatec.

Complementing the COM-HPC and COM Express Computer-on-Modules that congatec announced in parallel to the earlier commercial launch of these new SoCs, the added support of the brand new Intel IOTG embedded range significantly broadens the spectrum of possibilities for OEMs. Support currently includes the following processor variants on both COM-HPC Size A as well as COM Express Compact Type 6 Computer-on-Modules:

For the first time, design engineers now have the choice to go either with COM Express or COM-HPC. Each provides unique benefits. To help engineers make the best choice, congatec provides engineering support and is creating a COM Express vs COM-HPC design decision guide, which is available for download on the product pages of the conga‑HPC/cTLU COM-HPC Client module and the conga-TC570 COM Express Compact module.

Sound is provided via I2S and SoundWire in the COM-HPC version, and HDA in the COM Express modules. Comprehensive board support packages are provided for all leading RTOS’s, including hypervisor support from Real-Time Systems as well as Linux, Windows and Chrome.

Further information about congatec’s Intel Tiger Lake UP3 launch can be found on the main landing page https://congatec.com/11th-gen-intel-core/