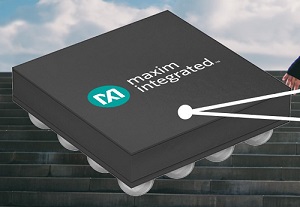 Designers of ultra-small portable devices such as wearables, IoT sensor nodes and health monitors wish to increase computing capability, memory and sensor resources in their feature-rich devices – all in an ever more compact form factor.

Providing a high-density power solution for extremely compact next-generation devices is the MAX77655 single-inductor multiple output (SIMO) power management IC (PMIC) from Maxim Integrated. This PMIC delivers a 700mA across four buck-boost channels. The space-constraint issue is solved by sharing one inductor among all four supplies in a single 3.95mm2 IC.

“As ultra-small electronics become more wearable and integrated for end-users, it becomes harder for designers to add functionality,” said Kevin Anderson, power semiconductor analyst at Omdia. “Any part of the system that can be reduced in size while increasing power will allow designers to pile on more computing horsepower for next-generation applications.”

“The MAX77655 breakthrough SIMO topology ushers in new capabilities to millions of small, battery-operated and cloud-connected systems. The highest power density that this solution offers opens avenues for wearables and AI edge manufacturers, whose vision is to boost the ‘intelligence quotient’ and data point collection for these devices,” said Karthi Gopalan, director, Mobile Power Business Unit at Maxim Integrated. “Designers can now pack an array of precision sensors with the highest processing power while delivering on the most critical customer need of maximum battery life in the smallest form factor.”

The MAX77655 and the MAX77655evkit# evaluation kit is available at Maxim Integrated’s website and from authorised distributors.

For additional power management platforms regarding systems requiring less than 500mA, Maxim Integrated has also introduced two new configurable PMICs – the MAX77643 and MAX77642. These ICs offer high efficiency at 93 per cent from a single inductor and a 3-output buck-boost regulator with a 150mA LDO/Loadswitch.