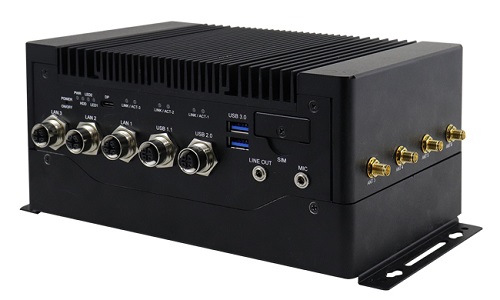 IBase Technology has announced MPT-500R, a new computer developed for Railway’s Gateway applications. The computer is based on Intel’s Atom x6000E processor and is designed to work in harsh operating environments. It comes with various connectivity options and employs rugged connectivity ports for longer operational life. The computer features two PoE ports that can provide power two IP cameras and run artificial intelligence identification on the go.

Railways are upgrading at an unprecedented pace, the systems are becoming more synchronized, and many manual tasks have been automated. But being a critical system, all the equipment used in Railways needs to be sturdy and reliable. And since connectivity plays a major role in the path planning and movement of both passenger and goods carrying trains it is important to have reliable gateway computers. A gateway computer provides connectivity to a distant network or an automated system outside the host network node boundaries.

According to the company, MPT-500R is capable of operating at a wide temperature range from -30°C to +70°C. and withstand up to 3Grms/3~500Hz vibration resistance. Certified with EU EN45545-2 fire protection and EN50155 standards covering equipment used on rolling stock applications such as Passenger Information systems (PIS), surveillance systems and vehicle monitoring systems, the MPT-500R series comes with 4GB/8GB LPDDR4 3200 memory on board, 64G MLC SSD storage with high reliability, and an option between 24V and 72/110V DC input to meet various power requirements.

The rugged computer comes with an Intel Atom x6212RE 1.2GHz or x6425RE 1.90GHz processor and runs with Windows 10, Windows 10 IoT Enterprise and Linux closed/open-source operating systems. The casing is made up of aluminium and features long fins for enabling passive cooling for safer and stable operation during long-term use. It features robust M12 USB, Ethernet and power input connectors, it ensures fail-safe connection and fault-free data transmission suitable for deployments in harsh industrial environments.