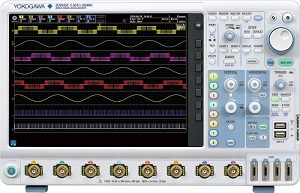 The need to develop energy and power-efficient motors, inverters and other devices for use in solar power and many clean energy applications has led to the need for measuring instruments that can simultaneously measure multiple control and communication signals.

The DLM5000 series models have either four or eight analogue input channels. With a single DLM5000 oscilloscope, it is possible to simultaneously view signals and inputs from up to eight analogue signals and a 16-bit logic channel (32-bit logic channel optional). When simultaneously measuring inputs from all analogue channels, a maximum sampling rate of 2.5 GS/s can be maintained.

The DLM5000 user interface includes a jog shuttle, rotary knobs and a large touch screen, which greatly simplify the viewing and analysis of waveforms.

A waveform processing engine speeds up data processing and saves time with the drawing of waveforms. The DLM5000 also supports the USB3.0 standard and rapidly transfers large amounts of data from multiple channels for storage on a PC, thus significantly reducing the waiting time.

The DLM5000 comes with a trigger function that supports the CXPI in-vehicle LAN standards. With a simultaneous display of both the waveform data and the signal analysis results, the correlation between these two data sets can be easily made.

The DLM5000 can store up to 500 M points of acquired data (twice that of the previous DLM4000 series). With this large memory, up to 100,000 waveforms can be automatically recorded in the internal storage, allowing easy search and comparison.

A DLMsync option is planned to be released by next spring that will enable measurements to be taken accurately and simultaneously from up to 16 analogue channels and two 32 bit logic channels by connecting two DLM5000 oscilloscopes. This will offer even greater flexibility with the debugging of embedded systems.