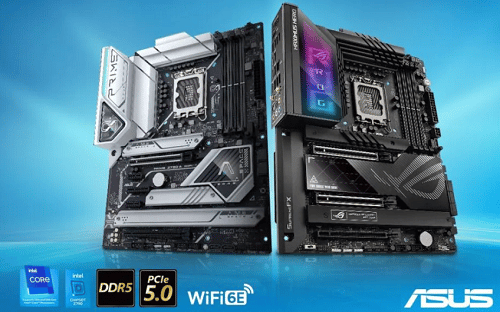 If you are planning to upgrade your workstation and have decided to go for the latest generation of Intel core processor then you must be aware that there are only a handful of motherboards that allows you to use the full potential of the newer 13th Gen Intel Core processors. The Z790 features ASUS’s exclusive technologies like ASUS Enhanced Memory Profile II (AEMP II), AI Overclocking and AI Cooling II which enables the users to extract the higher potential of Intel’s newer processor series.

According to the company, ASUS’s AEMP II profiles offer up to 37.5% faster RAM speeds than normal DDR5-4800 specs. It also simplifies tuning memory above baseline settings while maintaining stable system operation. Some of the Z790 motherboards feature ASUS AI Overclocking that boosts CPU clocks for both lightly threaded and all-core workloads with just one click. The new series also offers better cooling performance.

The AI Cooling II automatically monitors CPU temperatures and dynamically adjusts fans to optimal speeds. To make the upgradation of the workstation easy, the motherboards feature the ASUS PCIe Slot Q-Release button that enables users to remove a graphics card from the slot with a simple press of a finger. Furthermore, ASUS has also simplified the process of installing an M.2 drive, the ASUS M.2 Q-Latch allows users to secure or loosen up an M.2 drive with just their fingertips.

The new lineup of ASUS Z790 motherboards will be available in late October from authorized ASUS stores.