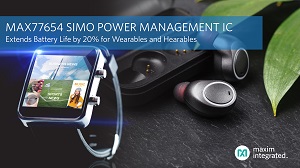 The MAX77654 by Maxim Integrated is a single conductor, multiple-output (SIMO) power management IC (PMIC) that empowers designers of wearables, hearables and other compact consumer devices to further reduce their solution size by half. This next-gen SIMO PMIC can support three outputs with just one inductor at 91 per cent efficiency, which is 16 per cent greater than traditional 4-chip systems. With significantly reduced solution size, system designers can include more functionalities into their applications.

With a compact form factor, designers must also consider extending the battery life along with reduced heat dissipation and noise. Therefore, the MAX77654 SIMO PMIC addresses this challenge by replacing 3 buck-boost converters and 3 inductors with a single converter and a single inductor. It also replaces 2 LDOs/load-switches, a battery charger and additional passives, resulting in a 50 per cent smaller solution and en extended battery life by 20 per cent. A shutdown current of less than 500nA and a low supply current of 6µA with 5 regulators also allows designers to add more functions to their ultra-low-power consumer devices.

The SIMO PMIC integrated solutions require up to 40 per cent fewer components and 23 per cent lower BOM cost compared to discrete solutions. The MAX77654 and the MAX77654EVKIT# are now available from Maxim Integrated’s authorized distributors.