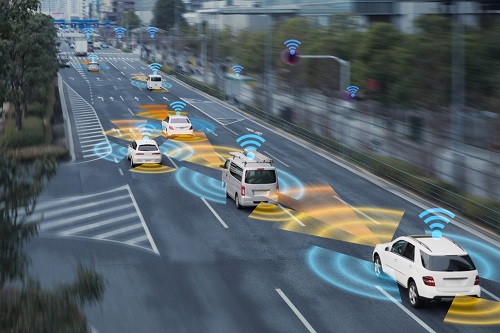 OPAs are an emerging technology made of arrays of closely spaced (around 1µm) optical antennas and which radiate coherent light in a broad angular range. The produced interference pattern can then be changed by adjusting the relative phase of the light emitted by each antenna. For example, if the phase gradient between the antennas is linear, a directional beam will be formed. By changing the slope of the linear gradient, the direction of the beam can be controlled, which enables solid-state beam steering.

This can improve performance in scanning speed, power efficiency and resolution compared to the heavy, power-hungry and expensive mechanical beam-steering systems used in current LiDARs. An additional feature of OPA-based LiDAR systems is that they have no moving parts, as the solid-state beam steering is achieved only by phase tuning the antennas, which significantly reduces the size and cost of these systems.

“The development of a high-performance OPA would pave the way to inexpensive LiDAR systems for autonomous vehicles, holographic displays, biomedical imaging and many other applications,” said Sylvain Guerber, researcher at CEA-LETI, France. “But widespread adoption of LiDAR will hinge on lower system costs and smaller form factors.”

LiDAR, which stands for light detection and ranging, has emerged as a key enabling technology for tomorrow’s sensing and vision systems. In addition to automotive and medical uses, they could enable autonomous mobility for drones and robots, as well as industrial automation. Commercial LiDAR systems must meet stringent requirements, especially for automotive applications. In particular, a high-power and low-divergence beam is needed to accurately resolve a scene. For example, resolving a 10cm object at 100m requires an OPA operating at a wavelength of 1µm with a circuit consisting of at least 1,000 antennas, each spaced 1µm apart. Therefore, the development of high-channel-count OPAs is necessary for a commercial OPA-based LiDAR system.

An integrated chip-scale OPA with solid-state beam steering can be produced by leveraging the benefits of a mature silicon photonics platform, Guerber said. However, this is only the first step toward a fully functional OPA because beam scanning requires a preliminary calibration. Due to the high number of required optical antennas, this calibration process can take a large amount of time, which is incompatible with the massive deployment of technology. Thus, the CEA-Leti team has developed what may be the first wafer-scale OPA characterisation setup, which is an important step toward industrialisation of OPA-based LiDARs. Also, genetic algorithms based on Darwin’s theory of evolution have been developed to quickly and reliably calibrate high-channel-count OPAs. These allow up to 1,000x faster calibration than previously used algorithms.

Guerber noted that broad commercial adoption of LiDAR technology by the automotive industry and other markets is projected to be several years down the road. OPAs are a critical step, which CEA-Leti will continue to work on.

“There are still a lot of challenges, especially at the system level,” he explained. “A LiDAR is composed of many elements: a laser, an electronic driver, an OPA steering system, a detector and data-treatment capability. All of them must work together; the OPA is only a part of the system.”