At the placement phase of assembly, the vast majority of SMT components are presented in reels, sticks or placed in waffle trays for fast, easy and reliable pick & place operations. Loose components traditionally represented a tiny fraction of the devices to be handled and would typically be taped to create a reel. But worldwide shortages mean that loose components as compatible alternatives to unavailable devices are now increasingly common in SMT production.

The new intelligent freeform feeder from Europlacer gives manufacturers a fast and effective alternative to taping loose components. It also serves to eliminate one process step and reduce the possibility of human error. The system comprises a pair of trays (one white, one black, to optimise optical contrast against the loose components) each featuring nine separate cells to hold different components. These are simply dropped into the 25mm x 18mm cells without the need for any orientation or alignment. 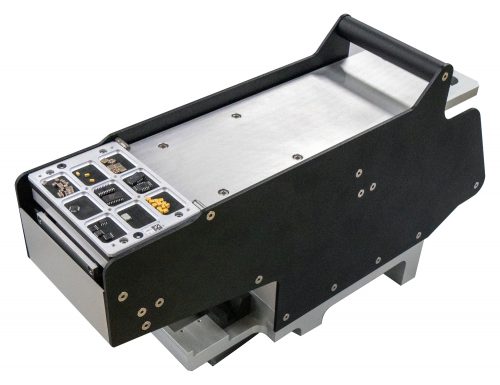 Using machine vision, advanced component recognition algorithms identify the devices held in each cell irrespective of angle, physical position or polarity, allowing the placement machine to pick and place perfectly. As well as being an optimum and timely solution for loose components as equivalents to replace shortages in production runs, the freeform feeder is ideal for NPI prototyping, end-of-production runs, engineering change orders and mass-customisation operations where specific board batches require the addition of selected components to assemble product variants.

The potential dangers of incompatibility presented by alternative components used to address shortages, whether loose or taped, can be mitigated by Europlacer’s integrated electrical component tester. Dynamic electrical testing during component placement deploys an LCR bridge independently calibrated to recognised international standards. The electrical testing function is built into the iineo+ machine and is an option on all models in the atom platform range. Using on-the-fly testing in conjunction with the new freeform feeder gives manufacturers confidence in the electrical functionality of the parts being placed and allows them to provide documented proof (to customers and quality auditors) of operational compatibility.

The freeform trays can be prepared offline and presented to the placement machine when required, occupying existing internal tray locations or taking advantage of new loader element hardware to occupy an external feeder zone. When deployed to an internal location, there is no practical limit on the number of freeform feeder trays that can be used. Similarly, there is no practical limit to the number of devices that can be allocated to each cell in the freeform tray.