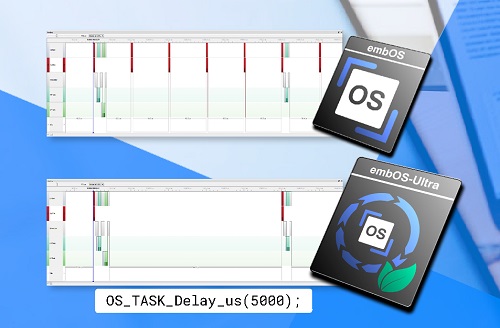 Upgrading to embOS-Ultra simply works as it maintains full API compatibility with classic embOS but, at the same time, provides CPU-cycle precision for scheduling through additional API calls. embOS-Ultra replaces the typical one-millisecond system tick with a single-shot hardware timer that generates interrupts exactly when — and only when — necessary. With this technique, traditional system tick interrupts are eliminated, CPU activity is reduced, and energy is saved, helping to deliver a greener future when powering billions of devices.

“Using cycles as the internal time base for an RTOS is a completely new concept with many benefits. The resolution of scheduling is orders of magnitude better than that of traditional RTOSes,” says Rolf Segger, founder of SEGGER. “We already use it in our J-Link debug probes and Flasher In-System programmers. We found that it simplifies system design and allows using RTOS API calls where before we had to use dedicated hardware timers. This made the firmware far easier to maintain and port, and it further enhanced the performance of the products. I am convinced that many of our customers will have the same experience.”

Migration from a traditional RTOS to the cycle-based embOS-Ultra is very simple: No application changes are required as the existing API and RTOS behavior is maintained. embOS-Ultra provides millisecond-aligned timing where classic embOS API calls are used and it provides microsecond or cycle resolution where the new API calls are used. The traditional embOS API can be mixed with the extended high-precision embOS-Ultra API in the same application, there is no need to choose one or the other. Applications can instantly benefit from the upgrade to embOS-Ultra.