Comparing today to the time of floppy disks, there has been a very significant change in technology. Somewhere along the line, floppy disk died and became the symbol of storage. Taking this legacy of removable storage ahead we have CD, flash drives and external HDD among other options. CD and Flash drives however come into the picture for small amount (~few GB) of data transfer. However for data storage for longer terms and large amounts of data, we require something more concrete and hence the move to larger storage capacity.

The HGST Touro mobile is one such compact solution for your data storage needs. Available in different variants from 500GB up to 3TB. We were able to get our hands on the 3TB variant.

Out of the 3 TB listed out as capacity, 2.72 TB is available for user data. Which might feel less, but once you start filing it up, you will eventually give up, or at least I did after the first 6-700 GB.

The box has a 3 TB Touro Mobile HDD and a connector cable. The manuals include a general instruction manual about the device, and another on setting up the cloud storage account. The connector is USB 3.0 backwards compatible.

The form factor is like any typical HDD, but it is smaller than the very widely popular WD my passport 1 TB variant. Measuring at 11 cm x 80 cm x 1.9 cm, this provides enough storage space on it to store all your movies (and television series).

The textured finish of the device feels good to hold, but the device feels a bit thick compared to the WD passport Ultra. Keeping in mind the higher size of the drive, this does not feel like a bother at all. The USB connector port and a single LED are both on the same side, to ease usage. The LED is just enough to mark the device is on or off, and does not feel on the eyes even in a dark room.

We tested the HDD out  on some of the popular bench marking tests, which show above regular performance on the USB 2.0 interface.

The disk averages at about 32 MBps sequential read and 26 MBps sequential write speeds, which is slightly above the WD passport. However with small file size, this dropped down to about 6 MBps, which is not an area of concern, since you would be using such large sized devices for large files, where it performs reasonably well.

The HDD continued to work superbly at a top speed of about 135 MBps on the USB 3.0 interface. Not a significant difference in read and write speeds on USB 3.0, as is evident from the graphical representation. The peak speed was achieved during the transfer of 64-128 KB files.

Comparing it to some of the other available large storage devices, the Touro Mobile works better than the widely popular WD passport ultra (120Mbps) and the WD elements (100MBps). However the transfer speeds over a longer term have yet to be calculated, since at the moment this is a new disk. 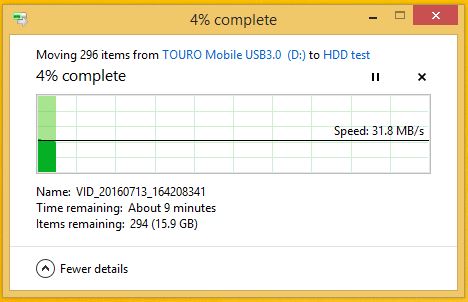 After a full month of usage, it continued to work at optimum speeds. The hard-disk works well over a transfer of software and videos. For smaller file sizes(20 KB), it dropped down to about 6 MBps. It is similar to the new device on the USB 2.0 interface. I’m gonna go for it, how about you?