The Anatomy of a Drone For Beginners

Drones are everywhere. Weddings, trips to the beach, riots; all of these events are being captured from an angle that was previously only accessible to big-budget Hollywood productions.

While drones are not by any means a new technology, the category is still in the early stages before mass adoption or ubiquity. Most early adopters have some experience with a similar category of products (typically other kind of R/C vehicles).

That means that there are still some challenges for new users. If you’re interested in drones and maybe thinking about getting your first drone, we suggest that you start with this infographic by productop10 about the basic parts of a drone: 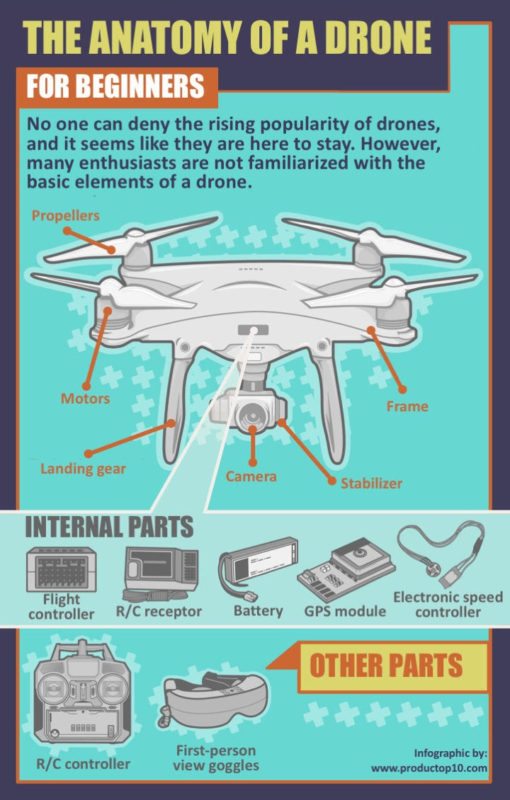 Up next is a brief description of each of these parts:

Maybe one of the most basic (and fundamental) parts of a drone. Generally, drones with cameras have four propellers, therefore the name “quadcopter” or “quad.”

It’s, simply put, the body of the drone.

As the name suggests, it’s the structure in which the drone will support itself when on the ground. Unlike other R/C vehicles, most drones have simple and rigid landing gear.

Depending on the brand and model, the camera might be integrated or the drone will have a base in which to place a dismountable camera.

It’s the mechanical piece that enables movement and stabilization of the camera.

One of the most important electronic parts. It’s in charge of receiving that information from multiple sensors and receptors to generate signals that will allow actions like changing speed, direction, or moving the camera.

It’s the sensor in charge of receiving the signals from the remote controller.

Provides the energy the drone needs to operate. Lithium-Polymer (LiPo) batteries are the most commonly used.

It allows the drone to have location data in the three axes. It’s critical for automated flight functions.

Also known as ESCs, are electronic parts that allow the flight controller to perform changes in the speed and direction of the motors.

Provides the link between the user and the drone. They usually look very similar to toy remote controllers, with the big difference that these ones have way more buttons and are significantly more sensible.

In some cases, drones will include (or you may have to purchase) first person view (FPV) goggles. These allow the user to get a live stream of the drone’s view as she pilots it.

Michael Woo is a content marketer at Productop10. He is a Computer Science Engineer with passion for new forms of arts a technology. Michael has also worked in mobile apps development and video game design.