DESIGN YOUR CAREER ON A TINY WAFER

The $10-billion electronics and chip design global market is growing at a rate of 6 to 10 per cent annually. With India evolving into one of the major players in this sector, job opportunities are tremendous -- MONIKA BHATI WITH INPUTS FROM JALAJA RAMANUNNI

Are you a budding electronics engineer confused about which stream will help you get your dream job? If technology is your forte, chip design is one of the many options you can consider to ensure a fast-track career.

From your personal computer to your mobile phone to your brand new digital camera, almost every electronic gadget has a tiny silicon wafer called ‘chip’ behind its intelligent functions. Chip designers across the world strive to make faster and cheaper chips that can automate part of or the entire function of mechanical devices.

Let’s figure out the opportunities in chip design and what all you need to secure a job in this sector.

The arrival of embedded systems (where intelligent devices are put inside everyday objects) and ubiquitous computing (where small computing devices proliferate to such an extent that even your shoes may be used to monitor your heartbeats) has given a boost to demand for professionals in chip design.

Design firms in India continue to battle talent crunch. A recent report by the India Semiconductor Association (ISA), the apex trade body representing the Indian semiconductor and electronics industry, says that India’s chip design industry is growing at a rate of 20 per cent annually. While global and domestic companies working in this sector have significantly increased their presence in the country, the design-aware talent shortage continues to plague the industry.

“There is no dearth of jobs for chip designers in India. In fact, there is a demand of about 6000 VLSI design engineers annually, but all the NITs and IITs totally produce only about 800 in a year. There is a huge gap between the demand and supply. The demand is so high that when one year is left before graduation, each student has at least two offers in hand from highly reputed organisations,” informs Prof. V. Ramgopal Rao, Department of Electrical Engineering, IIT Bombay. [stextbox id=”info”] 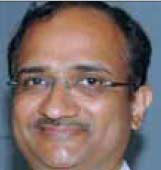 “The demand is so high that when one year is left before graduation, each student has at least two offers in hand from highly reputed organisations.”

To address the shortage of engineers possessing the right skills, the Indian government has set up a special manpower development programme (SMDP) in this area and spent a huge amount to introduce VLSI in 25 institutes like NITs and IITs.

Roles you could choose

Chip designers are basically design engineers who define the chip’s architecture, create circuit designs, run simulations, supervise layout, tape out the chip to the foundry and evaluate the prototype once the chip comes back from the laboratory.

At the top of the ladder is the architectural team, which designs the actual chip. The defined design is then implemented in a high-level language by the logic design team. Verilog and VHDL are the two popular languages being used today to write the code. With the new paradigm of systemon-chip design, SystemC and System-Verilog are being used for top-level design.

The circuit design team synthesises the logic description into a circuit, producing a document referred to as ‘netlist.’ The physical design team then takes the netlist and performs a ‘layout’ of the chip.

It’s the job of an application engineer to make sure that the chip works in the system that has been designed or used by customers. Process engineers, on the other hand, are involved in new wafer process development, device modeling and other R&D projects. Packaging engineers develop precision packaging technology and new package designs for chips.

This is followed by testing and verification. For every two design engineers, there are five verification engineers. Freshers are entrusted with the job of testing a chip, while its designing is done only by experienced professionals, who ensure (at all stages) that the design bestows the chip with following attributes: low power consumption, less noise, less area usage, and higher efficiency in terms of speed and yield.

Jobs are primarily available in digital design, analogue design, electronic design automation, embedded software, and product and test engineering. There is a strong demand for talented system engineers and application engineers. Depending on whether a candidate is a fresher or experienced professional, his role in the organisation could range from a technical individual-contributor to a technical leader to an engineering manager.