OLED Displays and Their Applications

The emission of light from materials in the presence of an electric field is called electroluminescence. In 1960s, a single crystal of anthracene helped to observe this phenomenon. Despite the huge quantum efficiency obtained with this organic crystal, no application has been reported with fascinating results. In 1987, Tang and Van Slyke from Kodak achieved efficient and low-voltage OLEDs from a p-n heterostructure device.

OLEDs are thin-film organic semiconductor light-emitting devices. These consist of a thin film of organic material sandwiched between two electrodes (anode and cathode) as shown in Fig. 1. Organic electroluminescent materials are contingent upon pi-conjugated molecules and are almost insulators. Light is generated when holes and electrons injected at electrodes recombine.

Anode is transparent and made of indium tin oxide. Cathode is reflective and made of metal. When an external potential is applied across electrodes, positive and negative charges (holes from anode and electrons from cathode) are injected. These electrons and holes shift inside the material and recombine to form excitons, emitting photons in the process. 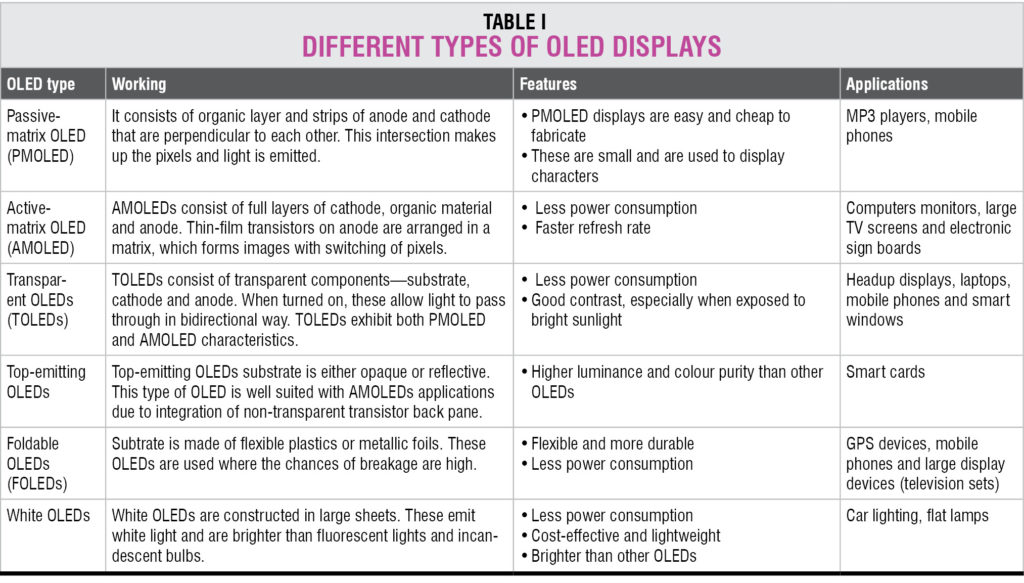 Based on their number of layers, OLEDs can be classified as two-layer and three-layer OLEDs.

Architecture of an OLED

An OLED consists of:

1. Substrate. Regarded as the base of an OLED, it is made up of a thin translucent glass or foil material.

2. Anode. It is also called as emitter. Its main function is to emit electrons when a voltage is applied across terminals.

3. Organic layer. The layer above anode is called organic layer. It contains conductive polymer made of hydrogen or carbon molecules.

4. Conductive layer. This layer is made of organic plastic molecules and helps to move holes from anode.

5. Emissive layer. This layer is made of organic materials that are different from those used in the conductive layer. It helps to transport electrons from cathode.

6. Cathode. Cathode is the topmost part of OLED displays. It injects electrons when a potential difference is applied across terminals. 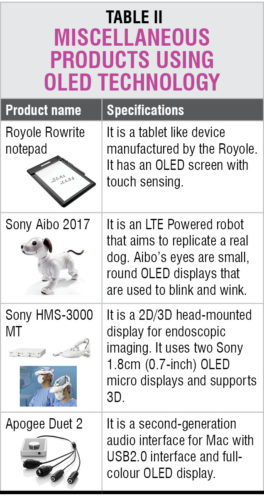 Products available across different categories are listed below.

Since year 2016 many mobile phones have been introduced with OLED screen, including Samsung A8+, Gionee S11S and M7 plus, Oppo A79 and R11 plus, OnePlus 5T, Google Pixel 2 and iPhone X.

TV display technology has evolved from LED to OLED and QLED. At present, all companies are working on OLED displays to make their products smart. OLED TV models include B&O BeoVision Eclipse, Loewe Bild 4, Bild 5 and Bild 9, Toshiba X97, Skyworth W9 Wallpaper OLED and S9E, Panasonic EZ950 and EZ1000, Sony XBR-A1E Bravia and Signage 65EE5PC. Some of the companies like LG have even categorised their TV displays into flat OLED display, curved OLED display and OLED wallpaper.