While solar energy production has the potential to end the power woes of a country, the added advantage is that it also creates a plethora of new job opportunities for its citizens. Find out the solar scenario in India, job opportunities available, skill set in demand and, of course, the pay package -- Abhishek Mutha

The four most useful natural energy resources that would probably remain always available on the Earth are wind, waves, geothermal heat and solar power. Among these, solar power is one of the most cost-effective sources of tapping energy.

Though initial installation and maintenance cost of the solar panels is on the higher side, these are an absolutely green way to generate electricity— free of smoke, gas and chemicals. Higher demand, cheaper materials, lower installation and maintenance costs, better policies and improved standards will surely make solar energy affordable in the near future. Also, initiatives like the Jawaharlal Nehru National Solar Mission (JNNSM) by the government of India, will lead to strengthening of the manufacturing capabilities and technology advancement, creating many more jobs.

Solar scenario in India
Meeting the increasing demand for electricity and expanding electricity access to remote villages are the two major challenges before India. Moreover, the Indian power sector is highly dependent on coal as fuel (see Fig. 1). “Solar is one sure shot initiative to address this, with coal becoming a rare commodity and carbon footprint and green initiative pushing us to embrace solar energy much more than any other technology,” says Prakash Nayak, chairman, IET India Power Engineers Panel.

Sriram Ramakrishnan, CEO, Consul Consolidated, adds, “In India, as there is an increasing gap between supply and demand of power, the solar sector is poised for explosive growth over the next decade.” According to a report, India faces a power deficit of about 11 per cent in the overall demand and 12 per cent in peak demand (see Fig. 2). Also, with an expanding economy, the demand for power is growing at the rate of approximately 6 per cent every year.

Though energy conservation is a major concern in the present situation, India can take full advantage of its geographical position as it is a sun-rich country with tropic of cancer passing through it. “On an average, we get more than 300 days of good solar radiation per year as compared to a cold country like Germany where solar photovoltaic systems have made economic sense,” says Ganesh Shankar, managing director, FluxGen Engineering Technologies.

“India is fortunate to have over 3000 hours of sunshine annually, which can be utilised as an alternative source of energy with the help of solar photovoltaic (PV) or concentrated solar thermal power technology,” says Nayak.

One of the major developments in the Indian solar sector is the JNNSM initiative, which basically aims at generating 20 GW of solar power by year 2020. Prior to JNNSM, for solar PV, the focus of the government was primarily on reaching the rural India. JNNSM is neutral to the choice of solar technologies and has provision for the development of all the viable technologies.

“Lot many initiatives like exclusive ministry with renewable energy focus and Jawaharlal Nehru Solar Mission are in execution in various phases and some states like Gujarat, Rajasthan and Haryana are taking the lead,” adds Nayak.

There is a close synergy between semiconductor and solar PV technologies. To realise the shift to a decarbonised energy supply, solar PV is a key technology option for India. Ramakrishnan says, “The traditional sources of power generation, like thermal and hydro, have many structural issues resulting in project implementation delays. Therefore solar power projects are being fast-tracked by the government to bridge the demand-supply gap.”

“Although solar as an industry is still at a nascent stage in India compared to other markets, it is only going to get bigger,” believes Singh.

Scope for a ‘green’ career
In a growing industry like solar power generation, opportunities will also naturally be on the rise.

“As per official statistics, in order to fulfil the 20,000MW installed capacity targets under the Jawaharlal Nehru National Solar Mission, the Indian solar energy industry will need an estimated 300,000 people by 2022 across all domains, profiles and levels,” says Singh. Commenting on the scope for a career in this field, Nayak shares, “The scope is unlimited since PV offers a unique opportunity to solve the 21st century’s energy and environment related problems simultaneously.” He adds, “There are enough opportunities in production and project execution of solar projects as massive plans are being laid by every state.” 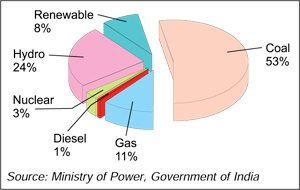 The launch of JNNSM creates excellent opportunities for start-ups and entrepreneurs to jump into this industry, consequently creating jobs. “Once the government steps up the support and protection of the domestic solar manufacturing companies, we will see a rise in the manufacturing sector. If enough support is provided, in the near future, we might even face the shortage of skilled manpower,” says Vineet Arya, head-marketing & communications, Tata Power Solar Systems.