Currently, India has over 900 million mobile subscribers, and the figure is expected to reach one billion mark by 2014. India also has the second largest telecommunication network in the world. With introduction of newer technologies, there is a plethora of new job opportunities in the hardware as well as the software domain of telecommunication -- Abhishek Mutha 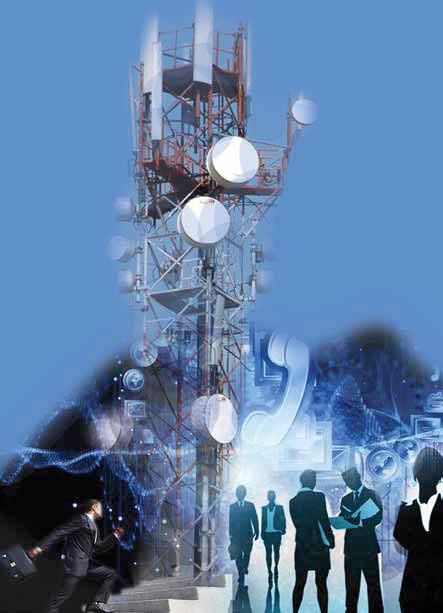 What’s the current telecom industry scenario in India? “Telecom industry is not as rosy as it should be,” answers Janardan Revuru, project manager, Hewlett Packard. He believes, “India has no dearth of technological and business innovation, but the telecom policies and scams have caused a negative impact on the sector, which has forced the service providers to rethink about their investments.”

In the wake of the famous 2G spectrum scam of 2011—considered as one of the biggest abuses of power—most of the companies were trimming their workforce back then. However, it was believed that job opportunities would surge again, once everything was stabilised. But the last few years have not been great for our engineering graduates.

“We are still dependent on MNCs to outsource work to India for creating jobs here,” explains Revuru.

On a positive note, “There is immense potential and fierce competition.” That’s how Haziq Khan, vice-president, sales and marketing, Netxcell Limited, defnes the Indian telecommunications industry today. He adds, “In spite of all the challenges, the industry is bound to grow further in the time to come. We have already witnessed exponential growth in teledensity in urban areas and slow but steady growth have been seen in rural areas too.”

As on September 30, 2012, the total number of telecom subscribers was around 937 million, out of which 96.7 per cent are wireless subscribers and the remaining are wireline subscribers, according to a TRAI report.

[stextbox id=”info” caption=”Skills required – the telecom experts speak”]“To start, the freshers should have foundational competency skills like proficiency in at least one programming language, basic understanding of embedded systems, operating system and software testing. When they start at Sasken, these all are the areas they are trained before starting any domain training/hands-on.”

“A good understanding of telecom fundamentals, networking basics and programming is essential for development jobs. For customer support or sales, a good understanding of telecom fundamentals and networking basics is essential. In addition, it is very important to have excellent soft skills such as communication (both verbal and written), inter-personnel skills, ability to work under pressure, multi-tasking and quick learning.”

“The skills should match a systems software engineer’s profile. For products which are on protocol stacks, C/C++ programming language is widely used. For manageability products, Java is the preferred language. Other skills include thorough knowledge of data structures, design patterns, systems analysis and design, problem solving and analytical abilities.”

“Fundamentally, they should be strong in all the subjects they have studied during their graduation level. Apart from this, they should possess strong IQ, EQ, logical and analytical capabilities, understanding of the OOP’s concepts and basic database concepts, good communication skills, good aptitude and positive attitude. Also, they should be good at numeric abilities and should be a good team player.”

“The industry has seen humongous growth with voice services and now it is time to move further with data services. That’s what makes the industry prospects bright,” says Khan.

Telecom—a top sector
Telecom, being one of the fastest growing sectors, there is a great demand for skilled and qualifiedaspirants with a good technical know-how.

Sharma adds, “This industry has seen a significantgrowth in the recent years, primarily due to high penetration of mobile and hand-held devices and the services that run on them. The industry certainly has huge potential.”

In India, the telecommunication industry is poised for growth. With the advent of higher-bandwidth technology, there will be growth in applications that require that band-width and devices that can utilise that bandwidth.

Immense scope
The telecommunications industry comprises numerous areas and hence there are various kinds of jobs in the industry.

Arshad Majeed, executive vicepresident, service delivery, Xavient, says, “Many jobs are related to the development and maintenance of devices, lines, systems and networks used to facilitate communication. This offers a wide range of career prospects, and one can have a career in application/product development, application testing, ERP implementation/integration, system administration, network planning, data networking, mobile application development and value-added services.”