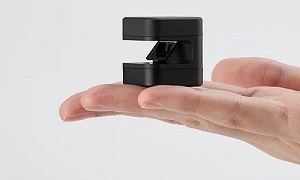 We all must have seen motion detection in science-fiction movies where it has been regarded as a thing of the future. Although significant strides have been made to provide the best user experience, current devices related to motion-sensing aren’t yet able to completely fulfil the user requirements and have limited capabilities to meet new expectations. These limitations are in the form of small range, features that capture a limited range of motion, consume a lot of power, large size, require complex setup etc.

Solving the above problems and more is the GLAMOS, a small yet powerful motion capture device that can create a virtual touchscreen. Based on your hand gestures, the device can rapidly respond for an interactive display, making your hands feel like an extension of the mouse cursor.

Small enough to easily fit in your pocket, the construction of this device is highly detailed. It includes a distance measurement/proximity sensor that gauges the distance between the user/object and itself. A rotating mirror module instead of a camera scans all directions and captures motion at 40Hz i.e. 40 frames per second (FPS) (UPDATE: newer devices now come with 60Hz). Assisting the mirror module is the ToF sensor and Infrared VCSEL that offer a 180 degrees field of view (FOV). The sensed data is then processed by motion recognition software, which converts them into touch coordinates. These touch coordinates are transferred wirelessly via Bluetooth to a display screen where the desired output is simultaneously obtained as per the relevant input.

The device is suitable for office or school presentations, where you can navigate from one slide to another with just a simple movement of your fingers. The device can be used in several other scenarios as well, such as answering calls and scrolling through recipes while in the kitchen (thus avoiding any unwanted mess), browse contents on TV without reaching for the remote, web browsing, interactive gaming and more. Thanks to the above features, GLAMOS can be implemented with all types of screens – tiny or large, from smartphones to tablets to smart TVs, allowing the creation of an invisible touchscreen as wide as 6ft x 3ft anywhere you want: on your wall, on the air or a whiteboard.

Another spectacular application is in self-driving cars for enhanced interactivity with the vehicle dashboard.

Despite the fantastic features, the device has a few limitations one must keep in mind. Although GLAMOS is capable of being used beyond 1m, the accuracy significantly drops, leading to a slight delay in response times. Also, GLAMOS may not work well under strong sunlight. Therefore, it is recommended to use it indoors as much as possible.

With that being said, there is absolutely no reason why one should not use this device; the advantages outweigh the disadvantages.

Developed by a tech startup called CoreDAR, the prototype was built in 2017 using LiDAR technology after hundreds of iterations. In 2020, a Kickstarter campaign was launched to seek funds for further developing the device. As of now, the device has entered into mass production.

“LiDAR technology will replace cameras in motion sensors and be the new hot topic in the industry,” says Charles Lee, CEO, CoreDAR. “LiDAR is only known for its use in self-driving cars these days. But I believe that it has unlimited possibilities.”

It is expected that soon GLAMOS will revolutionise motion detection and its powerful features will become a thing of reality rather than science-fiction.