Like any other currency, cryptocurrencies can also be used to buy goods and services. You can also trade them for profit. Based on the technology of ‘blockchain,’ their decentralised nature makes them theoretically immune to the old ways of government control and interference.

Cryptocurrency is a type of currency that uses digital files as money. Reserve Bank of India banned the use of cryptocurrency in India in April 2018, but the Supreme Court revoked the ban on March 4, 2020. Moreover, the current lockdown has spurred interest in this field, and today over five million Indians are its active users.

Such files are created using the same methods that are used in cryptography (the science of hiding information). Encryption techniques are used to regulate the generation of units of currency and verify the transfer of funds operating independently of the central bank.

The first such currency, Bitcoin, faced a lot of criticism and was considered a scam. But over time, when experts from various sectors started understanding Bitcoins and the underlying technology behind them, they understood the power of digital currencies and started to look at them in a positive way. Bitcoin has become the de facto standard for cryptocurrencies.

Digital signatures can be used to keep the transactions secure and let other people check that these transactions are real. Like any other currency, cryptocurrencies can also be used to buy goods and services. You can also trade them for profit. Based on the technology of ‘blockchain,’ their decentralised nature makes them theoretically immune to the old ways of government control and interference.

Blockchain is a continuously growing list of records called blocks, which are linked and secured using cryptography. It is an open, distributed ledger that can record transactions between two parties efficiently and in a verifiable and permanent way. For use as a distributed ledger, the blockchain is managed by a peer-to-peer network collectively adhering to a protocol for validating new blocks. Once recorded, the data in any given block cannot be altered retroactively. 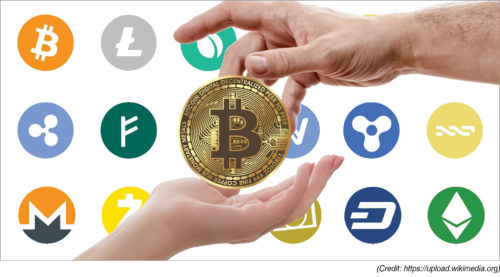 Filing for bankruptcy in September 2008 by Lehman Brothers of the US nucleated an unprecedented global financial crisis. This spurred initiatives for an alternative.

Already working on blockchain, a talented computer coder with pseudo-name Satoshi Nakamoto proposed Bitcoin on January 3, 2009, as a secure digital currency. There was no paper, copper, or silver – just 31,000 lines of codes and an announcement on the Internet.

Today, it is legal in the USA, Japan, South Korea, Russia, the UK, and Brazil besides European countries like Italy, Sweden, and the Netherlands. Globally, over 2000 cryptocurrencies exist as of January 2020. Bitcoin service charges are usually much less than credit cards.

Central bankers like RBI can print any amount of national currency, causing inflation. However, the ‘finite’ availability of cryptocurrencies makes them deflationary. For example, Bitcoin has a programmed supply limit of 21 million units. This feature is similar to a precious metal like gold, which is limited in supply on Earth.

Cryptocurrencies are developed as code by teams who build in mechanisms for issuance. Cryptographic protocols developed on advanced mathematics and computer engineering principles make it virtually impossible to break, duplicate, or counterfeit the protected currencies. Identities of users are secret, making transactions and fund flows difficult to attribute to specific individuals or groups.

Using innovative cryptography, the Bitcoin software encrypts each transaction—the sender and receiver are identified only by a string of numbers—but a public record of every coin’s movement is published across the entire network. Buyers and sellers remain anonymous, but everyone can see that a coin has moved from A to B, and Nakamoto’s code can prevent A from spending the coin a second time. Cryptocurrency coins are generated through a process called mining.

The software allows people to send money directly to each other without an intermediary, and no outside party can create more Bitcoins. Central banks and governments play no role. “Everything is based on crypto proof instead of trust,” Nakamoto wrote in his 2009 essay.

People who own Bitcoins have a program called Bitcoin client installed on their computers to manage their accounts. When they want to access their funds, they use the client to send a transaction request.

Transactions don’t require you to give up any secret information. Instead, they use two keys—a public key and a private key. The public key can be seen by everyone (it is actually your bitcoin address), but your private key is secret.

When you send a bitcoin, you ‘sign’ the transaction by combining your public and private keys and applying a mathematical function to them. This creates a certificate that proves the transaction came from you. Also, it protects merchants from losses caused by fraud or fraudulent chargebacks.

A cryptocurrency wallet stores the public and private keys or addresses, which can be used to receive or spend the cryptocurrency.

For instance, launched in 2015, Ethereum is positioned as a toolkit for financial innovation and experimentation. Launched in 2012, Ripple reduces the usage of computing power and minimises network latency. Created by Charlie Lee, an MIT graduate, Litecoin features a faster block generation rate. Launched in 2014, Tether minimises volatility. This year, Facebook is launching its cyber currency, Libra.

By 2018-end, Bitcoin mining farms had consumed 0.05 per cent of the world’s energy. These energy consumption levels were equivalent to the net power consumption of nations such as Ireland. China is the dominant force in the cryptocurrency industry, harbouring the world’s largest Bitcoin mining companies while simultaneously facilitating the most Bitcoin transaction traffic.

To lower operating costs, miners attempt to find affordable spaces that can store high-speed computer servers and cooling systems that diffuse heat generated by the servers. It is estimated that 78 per cent of cryptocurrency mining facilities are consuming electricity derived from renewable resources.

Bitcoin ATM (abbreviated as BATM) kiosks are machines, which allow the insertion of cash or a credit card in exchange for Bitcoin. These look like traditional ATMs but are not connected with a bank account. Bitcoin ATMs connect customers directly to a Bitcoin exchange for a localised and convenient way to purchase Bitcoin in person.

BATM allows a person to buy Bitcoin using an automatic teller machine. Some Bitcoin ATMs offer bi-directional functionality, enabling both the purchase as well as the sale of Bitcoins for cash. Bitcoin machines are not exactly the same as traditional ATMs, but these work in a similar way.

There are reportedly over 3800 cryptocurrency ATMs operating in 76 countries. In India, the first such ATM was installed at Kemp Fort Mall, Bengaluru, on October 14, 2018.
Once a customer visits the ATM, he validates his user ID and then enters a one-time password (OTP) sent to his registered mobile number. He can then deposit money, and the updated balance will be displayed. To purchase cryptocurrencies, the user will have to use a mobile application. The process for withdrawals is similar.

Since the inception of Bitcoin, only one critical vulnerability has been found in its implementation, when one malefactor snagged 92 billion Bitcoins. Fixing that required rolling back the entire financial record by 24 hours. Nevertheless, just one vulnerability in over ten years is praiseworthy.

Due to the anonymous nature of operations, cryptocurrencies were used by unsocial elements for money laundering and trade in prohibited items. If your Bitcoin wallet is lost, all Bitcoins get lost. These cannot be regained until and unless backed up with a backup phrase code.

Bitcoin prices are quite volatile. Speculators wish to take advantage of it, but genuine investors consider it risky and therefore hesitate to invest in Bitcoins and other cryptocurrencies.

This article aims to create an understanding of cryptocurrency amongst the common man. Cryptocurrency is realisation of innovator’s dream of digital currency to achieve a unique combination of three features—anonymity, independence from a central authority, and double-spending attack protection. The legal status of cryptocurrencies varies from country to country.

Any new technology faces resistance due to unawareness about its functionality. Research scholars in places like MIT have created improved versions of the first innovation, Bitcoin. Internet entrepreneur, Mark Zuckerberg has announced the launch of its cryptocurrency Libra on which the R&D team at Facebook is assiduously working.