Diwali – the festival of light

Diwali is the festival of light. It’s a true Indian festival exported to the world. Since ages we the Indians have been burning lights to mark this festival. Earlier in the 60s the lights came in the form of candles and oil lamps [ burning kerosene , mobile etc.] Then in the late 70s when the electricity started becoming all pervasive, the lights took in the form of electric chain of small light bulbs – connected in series [sometimes parallel ] one after the other.

In this era the lamps took the form of low power incandescent bulbs mass produced by China & other Asian countries. These low power bulbs appeared in several forms – lemon, flower or chili etc. Unlike today’s colorful LED bulbs in those days the color was created using different color of shades and covers. Obviously, the brightness was sacrificed by the shades.

Though the power consumption reduced substantially these incandescent bulbs have one common big problem – besides being heated up during operation they fuse quite often. Therefore, the impressive Diwali lights fitted one night on the cornice of a big edifice may become out of service next night due to one fused bulb! The bulbs came cheap but knowing which bulb to replace was the crux of the problem. The voltage used was 220-volt domestic single phase supply which was lethal! Therefore, the electrician needs to be extremely careful while checking for the fused bulb at that height! After identifying the fused bulb he just breaks the tiny glass and then short circuit the tiny wires by twisting it! – a very nasty process indeed.

For creating changing effects in the 70s through 80s a huge rotating drum timer circuit was used which was nothing but a big rotating drum on which the switches were fixed against a make and brake stylus. The tiny blue switching sparks coming out from near the light decoration along with a distinct gurgling sound of a rotating drum was a very common sight in those days! Even based on this inefficient technology in Bengal those days during Durga puja huge light effects & light themes were created relentlessly by the smart and intelligent electricians! Those who are from the 70s or 80s can still remember those ugly, fire emitting, dangerously looking timer drums in all those huge pandals of Bengal! 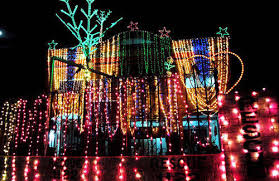 Towards the end of the 80s, the technology was advancing and more people started using these lights during all kinds of festivals. As the semiconductors, binary counters [CMOS ICs], switching power transistors, quartz crystals, digital timers, and high power diodes started improving & becoming cheaper, the noisy mechanical timers & relays were started being replaced by semiconductor relays and timers. Suddenly the safety & aesthetics is improved and the decorative place becomes peaceful & silent!

Though since 1975 itself the Red, Green & Yellow LEDs were started appearing in the US markets, here in India it arrived quite late not until the 1980s. Later the blue LED appeared sometime after 1995 and the super bright high efficient white LEDs came after 2000. Since after 2000 the LEDs started becoming omnipresent in all sorts of lights, decorations, and indications.

The LED packages further improved to RGB LEDs – having red, green and blue in one shell. Light them all together and it becomes just white! Suddenly the Diwali lights become more colorful and bright besides being less power consuming. The timer circuits also improved to silent semiconductor timers and semiconductor relays.

Finally ‘icing on the cake’ came from Adafruit industries, the USA on the new year of 2014 – the neopixel LEDs. WS2812 LEDs which are RGBW (W for super bright white) LEDs connected in daisy-chain fashion one after another, finally gets terminated into just 3 wires or 5 wires! Such that when connected to any cheap microprocessor with simple programs – each individual LED can be made on (or off) in any color combination of RGBW. It works as a complete matrix of light pixels and requires only 5 volts. The requirement of a timer circuit becomes completely unnecessary as all the patterns are created by the intelligent programs!

[Neo pixel essentially requires only 3 wires – Vcc, Gnd and signal, Sometimes the vendor gives two additional high capacity wires for Vcc & Gnd thus making it 5 wires. The signal in wire becomes signal-out wire on the exit side where the next pixel can be connected in series. This is how it becomes a long series of lights]

By the year 2015, the LEDs have entered into our daily life in big way. Gone are the days of Edison lamps, halogen lights, sodium vapor lights, fluorescent lights (T12, T8 and even T5 as well! ) and CFLs (compact fluorescent lights). In the same coin, the CRT TVs [big bulgy picture tube} has almost vanished today. Laboratories are now trying to improve the CRT [color rendering temperature] of LEDs little more such that someday in the very precision illumination fields like the dentist chair, operation theater where they still use incandescent bulbs will be replaced by LEDs.

Till that happens it’s only matter of little more time…