Electromagnetic interference (EMI) is a disturbance caused by radiation fields created by electronic devices such as cellular phones or laptops. EMI causes unacceptable degradation of systems or equipment performance. Therefore it’s important to develop an effective shielding material to protect the environment and workplace from EMI.

Electromagnetic interference (EMI) is a disturbance caused by radiation fields created by electronic devices such as cellular phones, household devices, communication antennas, etc. The most common example of EMI is the interference of laptop or radio speaker with mobile signals, resulting in the flickering of pictures or buzzing sounds. EMI consists of many undesirable radiated signals, which can cause unacceptable degradation of systems or equipment performance.

These problems, if left unattended, can cause severe damage to communication systems and electronic devices. Therefore it’s important to develop an effective shielding material to protect the environment and workplace from EMI due to unwanted electromagnetic waves. EMI shielding refers to the reflection and adsorption of electromagnetic radiation by a material.

Electromagnetic radiation emitted by electronic devices is the cause of EMI. The most common cause of EMI is electrostatic discharge (ESD).

The sources of EMI can be generally separated into the following categories:

EMI may transfer from source to victim by induction, conduction, and radiation.
The intentional release of energy to cause noise or interference to another device or electronic system is known as jamming. This condition is created through intentional emission or reflection of electromagnetic energy or signals to distract the electromagnetic signals of another system.

The ability to effectively jam signal or group of signals typically requires the use of a high-power transmitter, which produces a signal that is stronger than the target signal. The susceptibility of the receiver is also an important factor in the amount of transmission power necessary to effectively jam or disrupt a communication link or system. The electromagnetic interference has the capability of disrupting radio communications, radar, and radio navigation systems.

EMI may affect the devices, causing malfunction or failure, which might have very serious consequences. Under certain circumstances, EMI also causes health hazards such as insomnia, nervousness, headache, leukemia, and miscarriages due to continuous exposure to EM fields and pulses.

There are numerous factors that affect radio wave propagation, which include transmission power, antenna gain, attenuation factors, and noise. In addition, there are ionospheric and tropospheric conditions that also have a dramatic effect on the propagation of radio transmission through free-space.

In the design process of any space vehicle, especially in the aerospace industry, electromagnetic shielding plays an important role. If proper protection is not implemented, electromagnetic fields from various devices may have a tremendous effect on each other. It is mainly required to provide an effective shielding to the buildings containing power transformers and other electronic facilities, which will radiate electromagnetic waves into the environment.

The rapid development of electronic industries and the widespread use of electronics equipment in space, automation, communication, computations, biomedical, and other purposes has led to many EMI problems for the designers as their system or sub-systems operate in close proximity. If designers do not follow the EMI control technique to meet the EMC requirement during the design stage itself, it is likely to become a more severe situation in the future. The prime objective of the design should be elimination or suppression of EMI.

Shielding is typically applied to enclosures to isolate electrical devices and cables from the outside world. Electromagnetic shielding that blocks radiofrequency (RF) electromagnetic radiation is also known as RF shielding. The significance of EMI shielding relates to the high demand of today’s society on the reliability of electronics and the rapid growth of radio frequency radiation sources.

EMI/EMC first came into view in the 1940s and 1950s. At that time, problems were more focused on motor noises that were conducted over power lines and into sensitive equipment.

From the 1960s, EMI/EMC was primarily of interest to the military to ensure electronic systems in military services which do not interfere with each other. Without proper EMC consideration, accidents such as radar emissions causing inadvertent weapons release, or emissions from electronic devices causing navigation systems failure may occur and degrade the defence capability of the weapon systems. 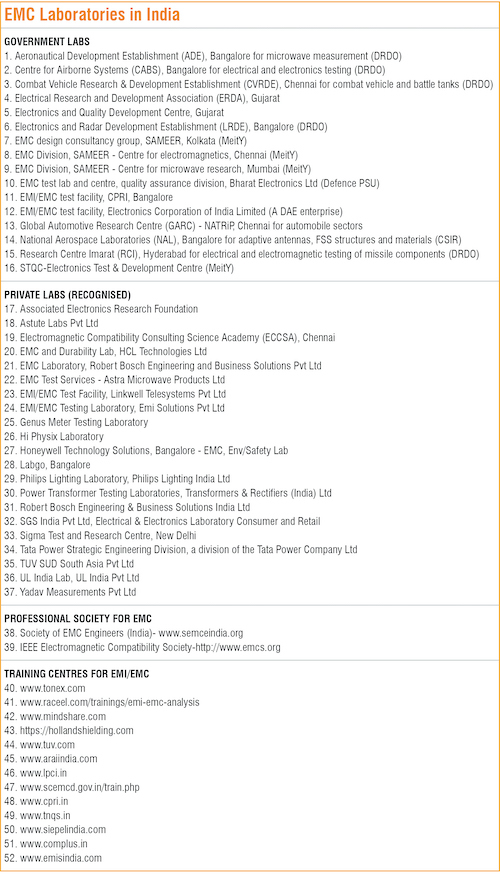 From the 1990s, the concern over EMI/EMC has been found to broaden dramatically; in fact, most of the countries have now instituted import controls requiring that EMI/EMC regulations be met before products can be imported into the country. The overall compatibility of all devices and equipment must coexist harmoniously in the overall electromagnetic environment. Emission, susceptibility to electrostatic discharges, susceptibility to emission either from radiated or conducted media are controlled.
This control is no longer just limited to computers. Now any product that may potentially radiate EMI, or that could be susceptible to other emissions, must be carefully tested. Products with no previous need for EMI/EMC control must now comply with the regulations.

The task of developing standards for the control of EMI began with the formation of International Special Committee on Radio Interference (CISPR), and a special committee under the sponsorship of the International Electrotechnical Commission (IEC).

Indian standards (IS) on EMC are adopted by the Bureau of Indian Standards (BIS) after the draft finalised by the Electromagnetic Compatibility Sectional Committee (ECSC) is approved by the Electronics and Telecommunication Division Council. The IS on EMC is being revised to align with the different CISPR and IEC publications. BIS is a statutory institution established under the Bureau of Indian Standards Act 1986 to promote the harmonious development of the activities such as standardisation, marking and certifying quality products, and attending to connected matters in the country.

The research and development (R&D) in the area of EMI/EMC is actively progressing in India with support from the defence, space, atomic energy, and labs funded by Ministry of Electronics and Information Technology (MeitY), Council of Scientific and Industrial Research (CSIR), and other agencies. The government labs are also backed by various private recognised labs and companies for testing and certifications. The academic institutes are also contributing their best for the development of the domain area.

Professional bodies like societies for EMC engineers (India) bring together all researchers, engineers, scientists, industries, business entities, and students to a common forum through the mega international event like ‘INCEMIC’ to discuss and deliberate the issues, developments, and future prospects in this field. Defence Research and Development Organisation (DRDO) labs play a leading role in this and have successfully conducted this event for many years.

Subhranshu Sekhar Samal is currently the head and coordinator for programme management unit (PMU) of ARCI, Gurugram. He has over 13 years of experience in research, scientific coordination, programme management, project execution, and science and technology outreach. He is a regular writer for EFY

Prof. S.R. Manohara is currently working as an associate professor in Physics at Siddaganga Institute of Technology, Tumakuru. He has extended his research network through many collaborations and visits to countries like Italy and South Korea

Amrita Samal is currently working for environmental protection, scientific outreach and career counselling. She has more than ten years of experience in teaching (UG and PG level) and software training and development