Delivering an impressive increase in performance, while requiring much less power, Intel’s Elkhart Lake based trio of low power processors—Atom, Celeron, and Pentium—accelerate multithreaded workload processing by +50% compared to the previous generation, due to implementation of new microarchitecture on four cores. For single-thread applications, the high clock rates of up to 3GHz are advantageous and help increase performance by up to +70%. This elevated processing performance can be leveraged in very cold and hot environments, with trouble-free operation from -40 to +85°C, which is very important for the industrial segment.

And with the introduction of Elkhart Lake, embedded applications can now take advantage of Intel’s 10nm SuperFin technology, which made its debut with this low-power Atom processor technology. Increased RAM support offers far more memory bandwidth and allows for much higher transfer rates. Up to 32GB LPDDR4 memory with data rates reaching 4267 MT/s, in contrast to 8GB LPDDR4 with up to 2400 MT/s from the previous generation, are now supported. The possibility to add additional memory capabilities with Intel’s budget-friendly Inband Error Correction Code (IBECC) is also a welcomed advantage for mission-critical real-time applications. Instead of using expensive, dedicated ECC memory modules, designers can leverage lower-cost conventional RAM. Setting the mode as ECC or non-ECC can be easily carried out in the BIOS, which means developers can choose which areas of memory will be assigned as IBECC. 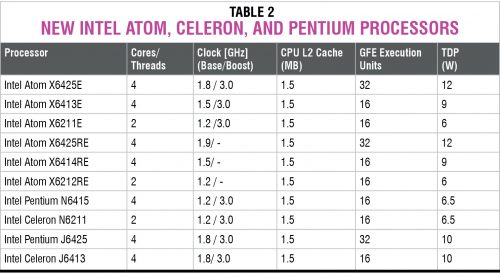 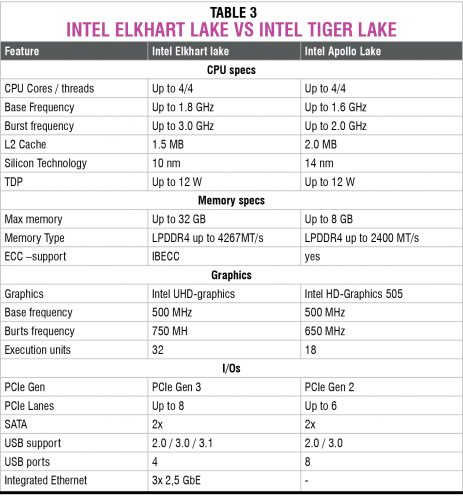 The latest generation of processors makes use of Intel‘s Gen11 graphics units, located on top of the CPU die, which double graphics performance to a maximum speed of 3x 4k @ 60fps and 10-bit colour depth. Once again, the use of 10nm technology in the manufacturing process allows for stunning high performance with low power requirements.

The greatest contributor to the doubling of performance is the increase of up to 32 integrated execution units (EUs) in the Gen11 graphics unit, compared to only 18 EUs found in the low-power Apollo Lake Gen9 unit. Moreover, improved compression, increased L3 cache, and higher data transfer rates lead to highly efficient operation, while providing more performance headroom for graphics-intensive applications.

With PCIe Gen3 finally offered in Intel’s low-power core processors, data rates have increased to 32 gigabytes (16 gigabytes coming in and going out) at 8GHz clock frequency, which is twice that of PCIe Gen2 at 5GHz.

Compatibility with USB 3.1 Gen2 for low-power x86 is another advantage that ups performance to a maximum of 10Gbit/s, allowing UHD video to be transmitted as an uncompressed signal over USB. This is definitely a welcomed feature, for example, for transmitting raw data directly from a camera out to a display.

But real-time support over IP is only one side of the equation in industrial applications requiring a deterministic behaviour. The same IP based communication between embedded computers and I/Os, with reduced latency and minimised jitter, is also required in synchronous processes. With the support of Intel’s TCC technology, these can now be orchestrated as well.

The transportation industry’s use of real-time applications that require integration of a CAN bus, for example, will benefit from these features. Settings can be fine-tuned with the Intel TCC software toolkit.

Security is a must-have feature for IIoT edge devices. Although it can be integrated by OEMs through the use of virtualisation technologies, as with the RTS real-time hypervisor for example, a more optimal solution is to have it as part of the hardware. The new low-power processor based boards and modules from congatec—which are designed for use with Intel’s new Atom, Celeron, and Pentium processors—come with a wide range of integrated features that help to address high security demands. These include Intel Boot Guard 2.1 for boot verification, Intel Platform Trust Technology (Intel PTT) for compatibility with TPM, and Intel Dynamic Application Loader (Intel DAL) for helping developers create uniform and trustable applications.

For encrypting and decrypting data, congatec’s Elkhart Lake based boards and modules provide even more value with the inclusion of Intel Advanced Encryption Standard New Instructions (AES-NI) and SHA Extensions that provide advanced security for secure hash algorithms that are hardware accelerated. SMx cipher support and HDCP 2.3 copy protection for the playback of HD media are additional features that will be appreciated by developers.

ZELJKO LONCARIC is Marketing Engineer at congatec AG in Deggendorf (Germany). Prior to joining congatec mid-2010, he held various positions with international companies in product management, marketing and sales marketing in Germany and Australia. Zeljko, who holds an MBA in business management and a degree in Media Technology from the University of Deggendorf, is also a Bosch-trained electronics technician.