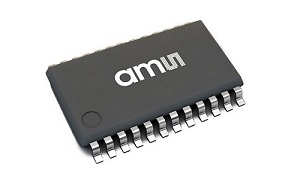 Automotive manufacturers have increasingly implemented sophisticated forms of autopilot functions, including adaptive cruise control and traffic jam stop-start systems, as well as LKAS that detect a safety threat. Torque sensors help detect minute deflections produced when the driver grips the steering wheel, but this form of hands-on detection can be easily deceived, creating risk to self and other road users.

Now, the trend is shifting towards capacitive sensing for hands-on detection, as it is more reliable towards human touch and can be simpler and cheaper to design and build.

Thus enhancing the safety of assisted driving systems is the new AS8579 capacitive sensor that reliably performs hands-on detection on the steering wheel. It implements a novel technique for capacitive sensing, performing separation of resistive and capacitive parts of the impedance measured over the sensor element. This technique more reliably detects the presence of a driver’s hands when wearing gloves or in humid conditions, than the charge-discharge method of capacitive sensing, which fails when the driver wears gloves and false detection signals are generated by the presence of moisture or humidity.

The safety credentials of the AS8579 also include multiple on-chip diagnostic functions, ensuring support for the ISO 26262 functional safety standard up to ASIL Grade B. The sensor is qualified to AEC-Q100 Grade 1. Operating at one of four selectable driver-output frequencies – 45.45kHz, 71.43kHz, 100kHz or 125kHz – the AS8579 offers high immunity to electromagnetic interference.

With an operational supply voltage of 5V, the device is supplied in an SSOP24 package. The AS8579 automotive capacitive sensor is available from ams for sampling along with an evaluation kit.