A Guide to Modern Digitisers

This article is about the more complex digitisers used in research, design, and test and measurement labs, which are different from the simple ones. -- Anagha P.

Digitiser is the generic term for a device that converts analogue data (image, sound, video, document and signal) into digital format. The most common and simple digitiser found these days is the one attached to the liquid crystal display (LCD) of a touchscreen phone that converts your press, swipe and similar actions into digital signals, understandable by the phone.

This article is about the more complex digitisers used in research, design, and test and measurement labs, which are different from the simple ones. Such instruments are often coupled with other instruments and used in situations where high-speed analogue signals need to be sampled. Some application areas include semiconductor testing, ultrasound and other non-destructive testing, particle physics research and experimentation, medical imaging, environmental monitoring (radar), software defined radio, video signal analysis, cable fault testing, communication protocol analysis and so on.

What is a digitiser
A digitiser is basically a set of multiple analogue-to-digital converters (ADC) with added functionalities like buffer memory and programming capability. Each channel of a digitiser has one ADC. It rapidly acquires, stores and either sends these multiple channels of data to a PC for processing or processes the data onboard.

Early models of modern digitisers date back to 1950 and used nuclear instrumentation module (NIM) and computer automated measurement and control (CAMAC) interface standards. However, creation of the standard instrument interface bus, general-purpose interface bus (GPIB/IEEE-488) instrumentation standard, in the late 1960s was a breakthrough in this field. 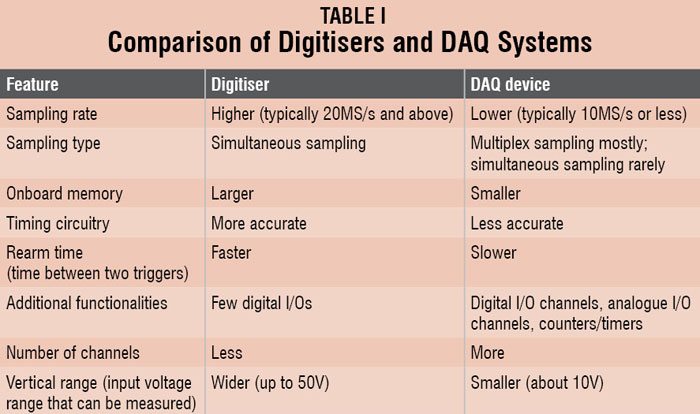 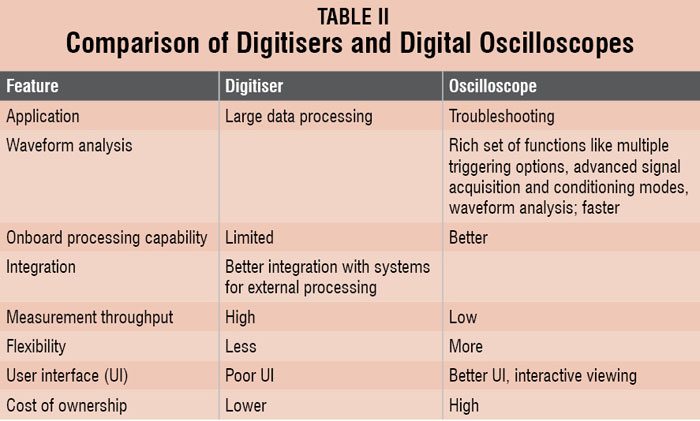 DAQ, digitiser and oscilloscope
Although a digitiser is a device used for acquisition of data, it has several differences from a typical data acquisition (DAQ) system (Table I). Oscilloscopes and digitisers share some common attributes such as basic specifications (sample rate, vertical resolution, memory capacity and analogue bandwidth), similar power consumption and size. These both measure analogue data of any system, convert it to digital format and transfer the data to a controller or PC for further processing. Though the terms digitiser and oscilloscope are sometimes interchangeably used by firms like National Instruments, these have some differences (Table II).

Bandwidth. Any signal consists of a main signal along with its infinite harmonic components. A digitiser has to capture the input wave along with several harmonics in order to get its true shape with least distortions and the most accurate measurements. It is best if the bandwidth of the digitiser is at least two times the highest frequency component of the signal to be measured.

Sampling rate. This is the rate at which the ADC in a digitiser can digitise the incoming signal. Although, according to Nyquist theorem, the sample rate of a digitiser should be just twice the highest frequency component of the input signal, clean representation of a signal requires a sampling rate more than that.

A digitiser with a sampling rate three to four times the highest input frequency is particularly important in time-domain applications such as overshoot, rise time and other pulse measurements. But for applications that require precise timing and amplitude measurements, Sheik Ahmed of Kingsly Instrumentation & Communication recommends a sampling rate of minimum eight times the highest frequency input.

Resolution and dynamic range. Resolution of an ADC is the number of bits it uses to digitise input samples. If the resolution is n bits, then the input signal can be represented in 2n number of discrete digital levels or steps. 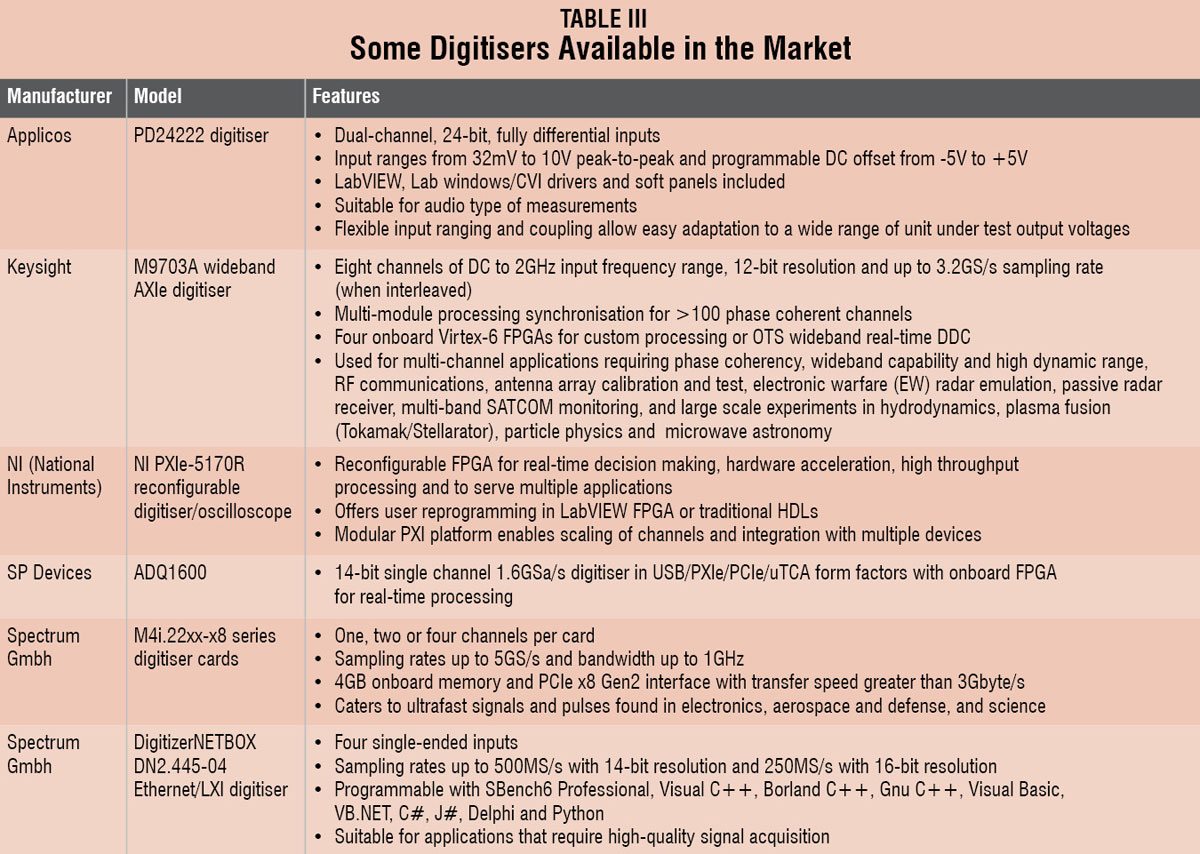