Blue Brain is the world’s first virtual brain. It can think, take decisions and store anything in memory, just as the human brain does.

Blue Brain project is the first comprehensive attempt at reverse-engineering the brain of a mammalian, so that through detailed simulations, functions of the brain can be understood. One of the main advantages of the project is brain uploading—even after a person dies, his knowledge will not be lost. Blue Brain can function exactly the same way as a human brain.

This project is also used to understand various brain diseases. The development of this project allows scientists to understand the human brain in more detail. Blue Brain project was founded by Prof. Henry Markram from Brain and Mind Institute at EPFL (École Polytechnique Fédérale de Lausanne) in collaboration with IBM. The simulation does not consist simply of an artificial neural network but involves a biologically-realistic model of neurons. It is expected to shed light on the nature of consciousness.

World’s first virtual brain
A virtual brain is a machine that mimics the operations of a mammalian brain and produces output. This operation requires a powerful supercomputer. Blue Gene is a supercomputer developed by IBM to handle such situations, hence the name Blue Brain. 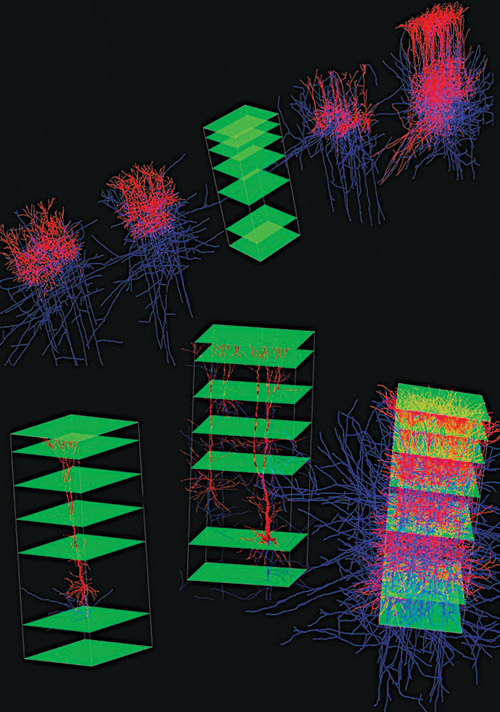 It could be argued that artificial intelligence, robotics and even the most-advanced computational neuroscience approaches that have been used to model brain functions are merely if-then-like conditions in various forms. This project will use adaptation and learning algorithms as these systems are more powerful.

Reconstructing Blue (neocortical) column
To reconstruct Blue column, the three-dimensional morphology of the neuron is generated and the errors corrected. The corrected neurons are placed in a database to produce numerous clones. For the action-potential passage, ion channels are inserted in each neuron.

The simulator neuron is used with automatically fitted algorithms running on Blue Gene to insert ion channels and adjust their parameters to capture specific electrical properties of the different electrical types found in each anatomical class. Three-dimensional neurons are placed in the layers of the Blue builder, which is a circuit builder. Axo-dendritic touches are maintained and analysed by an algorithm known as collision algorithm.

Modelling and simulating the microcircuit
In 1952, Hodgkin and Huxley published the highly-successful model of ionic currents that allowed simulation of the action potential. These simulations show the behaviour of an ion channel. This ion channel can be used in an artificial neuron for transferring the action potential. Neurons are simulated into microcircuits, which are embedded on a local circuit attached in the brain. From there, whole brains are simulated.

Number of neurons are attached to a single neuron for efficient data transferring. Neurons will receive data and transfer it into thousands of other neurons, so the microcircuit must be small and less complex, but it must fully sustain the neurons. A massive increase in computational power is required to make this quantum leap—an increase that is provided by IBM’s Blue Gene supercomputer.

The neocortical column is the basic functional unit of the cerebral cortex in mammals. These functional units are in millions in the cortex, which are similar in rats and humans. The laboratory has prepared for this reconstruction by developing the multi-neuron patch-clamp approach, recording from thousands of neocortical neurons and their synaptic connections. A four- to sixteen-day-old rat’s somato sensory cortex is used for recording, as visualisation of their tissues is optimal at this age.

The template, Blue column, will be composed of ~10,000 neocortical neurons within the dimensions of a neocortical column (~0.5mm in diametre and ~1.5mm in height).

When the microcircuit is built, the circuit is started. For this, the power of Blue Gene computer is used. All the 8192 processors of the computer are pressed into service. The process is highly parallel so it can easily solve highly-complex computation. As the electrical impulse travels from neuron to neuron, results are communicated via inter-13 processor communication (MPI).

RTNeuron
RTNeuron software, developed for Blue Brain project, is used for visualisation of the neural simulation.