Miniaturisation of electronics has created numerous modern form factors where a conventional battery does not fit any more. Thus you may need to go for a different battery to power your new mobile design. This article helps you in selecting the one for your next-generation embedded system -- Sneha Ambastha and Dilin Anand

As the most popular portable energy source for embedded systems, batteries are paving their way through mainstream applications as the primary power source of choice. An increasing number of designs are being made where a device is designed around the battery, thus having an increased effect on the design’s form factor.

While much of these design decisions are simple, there are cases where a purposefully over-engineered device might need a higher current support than its conventional power source could deliver without affecting user experience. It is for such cases that engineers usually ponder over the inclusion of a bigger battery at the cost of sheer bulk, or include energy-harvesting features that increase cost and complexity.

Power sources and the applications they suit
The decision to select a power source for a commercial product is primarily based on the environment it is being designed for, the device’s power requirements, its size and form factor, as well as targeted cost of the final product.

Power consumption by a device would determine what type of batteries need to be used (such as rechargeable or use-and-throw type), as well as the size of battery to be included in the design. If rechargeable batteries are to be used, a recharging facility may be required to be built into the system. In such a case, the designer could go ahead and make the device dual-powered, since the required components already exist in its system design. This is mostly true for an embedded system which is to be stationed at one place for most of the time, or if it is a piece of equipment designed to be always on. An example of this is a gaming laptop.

Solar power is used in areas where availability of continuous electric power is an issue, as in case of remote data loggers. Energy-harvesting methods are used for mobile applications where there is no space to include a battery, such as in RFID, NFC tag and card readers. Energy harvesting can be done from radiated energy (RFID and NFC) or the audio port (card readers).

Criteria to be considered
In general, the most important parameters to be considered when you select a power source are voltage and current capacity. Once this is decided, the next step is to select watt-hour or milliampere-hour capacity. Next is the size of battery, solar-panel or any other source of power. This selection would be constrained by the earlier mentioned parameters.

Cost is also an equally important consideration, especially when we consider the percentage of over-engineering required, like extra high current support.

Size and weight of battery or panel. The size of the battery includes its height, width and depth. These are some of the defining characteristics that are first looked at while selecting the power source for a device. This is based on the targeted size of the device, and the size of the circuitry that has already been designed.

Once a rough idea of the target device size is formed, the designer can source batteries from retailers by selecting the closest dimensions possible out of their inventory.

Online vendors such as element14 and Mouser allow engineers to select the height, width and depth they require so as to provide the closest dimensioned battery possible. The same is done while selecting solar panels as well.

Ratings and capacity. For selecting battery as a power source, attention must be given to its discharge capacity (1C and 2C) and energy rating such as (1000mAh or so).

For solar power, you can select small panels by considering their power rating, maximum power voltage, number of cells and other specs. Besides this, care must be taken in providing polarity proofing and recharging facility inside the device itself. Below is an example of battery selection for a microcontroller-based circuit that Knewron worked on, where 3.3V was the minimum necessary requirement and the device was to be run for 5 to 6 hours at one go. 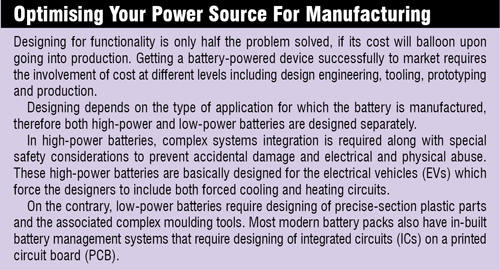 “With approximate peak current consumption of 25mA, we chose a power source of 160mAh capacity delivered by a small LiPo battery that would meet these requirements. Due to its light-weight nature and small form factor, this LiPo battery was the correct choice,” explains T. Anand, principal consultant, Knewron.

Terminals. Connectors are selected based on the need for a compact solution, or even for ensuring that the final device is tightly packed. Most off-the-shelf batteries come with different kinds of termination styles for battery connectors, such as PCB pins, pressure contacts or snap contacts to name just a few. However, certain applications might also require custom-designed battery connectors.

Some of the main factors affecting connector selection is surface-mount technology, compression style, through-hole interface to your PCB, different circuit sizes and battery pack orientation on the product.