Whilst incremental changes are to be seen everywhere, we bring to you the most cutting-edge technologies in the world of sensors -- Sneha Ambastha and Dilin Anand

It is the beginning of a new year, and CES 2014 might have begun by the time you are reading this article. One common theme that we can expect in a lot of products launched at CES this year would be the dependence on a multitude of sensors. These sensors are important for all the smart functionalities you see in high-end smartphones. Join us in this story as we check out the cutting-edge sensor technologies, and how you can implement them in your next electronic design.

9-axis sensor fusion technology. This technology works with gyroscopes, accelerometers and magnetic sensors from any manufacturer without any restriction and thus allows us the required flexibility and control. Ideally, the precision of sensor fusion technology is very difficult and can delay the launch of a product as it includes so many steps, such as sensor integration, enhancement of signal, sensor drift, calibration, power consumption and magnetic drift. This technology uses low-power fusion co-processor with 9-axis sensor fusion algorithm that fuses and continuously auto-calibrates the sensors using a small fraction (less than 1 per cent) of the power of even a low-power microcontroller sensor hub. 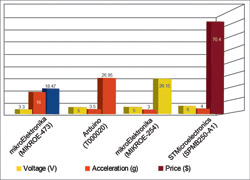 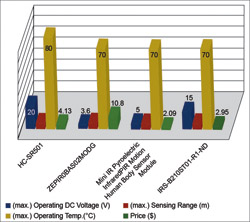 SpacePoint technology. It is also a 9-axis sensor technology in which 3-axis geomagnetic sensor is integrated with 3-axis accelerometer and 3-axis gyroscope, which is then fused with the 9-axis sensor fusion algorithm to get accurate motion sensing for consumer applications (like controllers for TV, set-top boxes, video games, etc). It provides a very accurate performance with high resolution, effective responsiveness and 1:1 motion tracking. Imagine playing a video game and controlling the characters in the game just by your body actions with 360-degree pointing accuracy, even without touching the screen of the video game or any controller and, most importantly, without any time lag. This beautiful application has become possible due to SpacePoint technology. 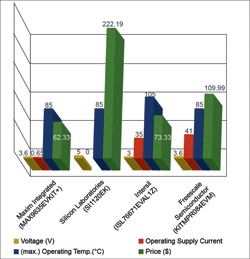 Electro-mechanical polymer (EMP) actuator technology. EMP is a flexible, light and ultra-thin film with electro-active properties. It uses a piezoelectric polymer material which elongates on application of an electric field. This material is used to generate very fine and powerful sensors and actuators to enhance the sensory user experience in electronic devices. EMP, which is only about 200µ thick, stretches and elongates on application of a charge that creates vibration on the surface and causes sounds and surface deformation. The EMP touch sensors are considered perfect for the precise gesture-control applications such as squeezing detection and pressure. The sensors manufactured by this technology are ultra thin (<200µ), as light as a feather—weighing lesser than 0.001 gm and have a fast response time (<5 milliseconds).

Table I indicates different sensor-based technologies that have helped the launch of some amazing consumer electronics products in the previous year.

Tools and solutions available for design engineers
The continuously-evolving sensor world has become so important that lots of initiatives are being taken in this field. Every now and then we see many conferences, expos and seminars to promote the knowledge of sensor-based technologies and products. The worldwide market for sensors also includes kits, modules and training programmes to help the young engineers take initiatives and innovate new products.

There are quite a few development boards available in the market for a geek who wants to try out a few sensors and build some interesting applications. Harsha Bagur V., group manager, In-vehicle Infotainment, Robert Bosch, shares some valuable information on this. “Popular development boards like Arduino, Raspberry Pi and BeagleBone are being increasingly used by DIY enthusiasts. Arduino, however, is suited for simpler and less process-intensive and interactive applications. Both Raspberry and BeagleBone come with popular OS distributions like Linux and Android. BeagleBone, especially, does have multiple options for external connectivity and hence there are possibilities to realise use cases with multiple external sensor connectivity.” 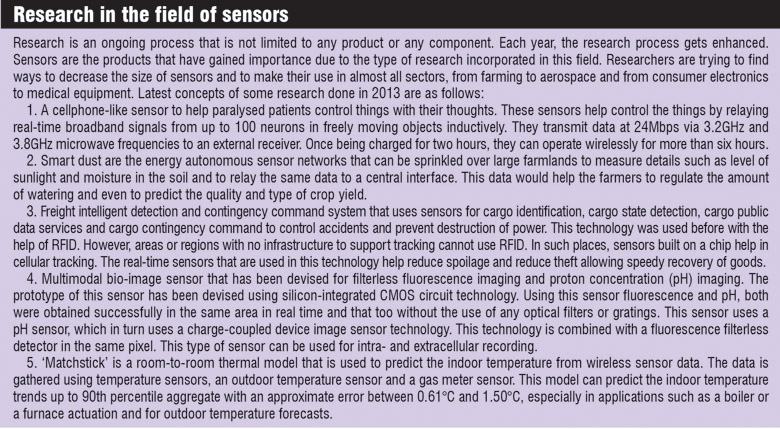 Priya Kuber, managing director at Arduino India, reminds us that all programming boards these days have advanced software libraries to detect sensors. A sensor usually sends a string of data, and how to interpret the data into a digital form and make use of those values to get desired result with a programming board is the job of a design engineer these days. “Since everything is based on data, I would say that the new ‘tools and initiatives’ are the software libraries that run on the board. For example, Capacitive Sensing Library is a library that converts ordinary aluminium foil into a useful calibrated sensor,” she adds.