Whilst incremental changes are to be seen everywhere, we bring to you the most cutting-edge technologies in the world of sensors -- Sneha Ambastha and Dilin Anand

He adds another example, the SP1202S01RB sensor by National Semiconductor, which is used for measuring liquid level utilising a pressure sensor. Most importantly, this sensor is being used for sensing the quantity of water in drought-affected areas.

Software. There are also some sensors whose role mainly depends on the software. These analyse the environment by sensing some parameters and make use of a software to come to a decision. Fuzzy logic plays a vital role in such sensors. Chow Reddy explains, “Another case where sensor plays a small role but circuitry and software play a vital role is load cell for weighing applications. The load cell here is a wheatstone bridge to develop a differential potential at the stress applied on one of the wings of the bridge. The developed potential puts in few microvolts prone to get affected by noise due to external disturbances, vary due to vibrations created over the platform. ADC employed to read these parameters need to be properly selected.” Chow Reddy further explains that software to reject the noise as well as average the weight data to produce a calibrated weight accurately is as important as a physical sensor.

New sensors that design houses are looking forward to
Several sensors have emerged in the Indian market since last one year for different applications. The most awaited in power electronics and industrial applications, according to Reddy, is Allegro’s ACS712—a linear current sensor in a SOIC 8-pin package. He explains that it brings in economical and precise solutions for AC or DC current sensing for applications including motor control, load detection and management, switched-mode power supplies and overcurrent fault protection. “The device consists of a precise linear Hall sensor with a copper conduction path located close to each other. Applied current flowing through this copper conduction path generates a magnetic field, which is sensed by the integrated Hall IC to develop a linear potential at its output. Device accuracy depends on close proximity of the magnetic signal to the Hall transducer,” he adds.

Interesting developments. The year 2013 saw many brands enter the field of sensors along 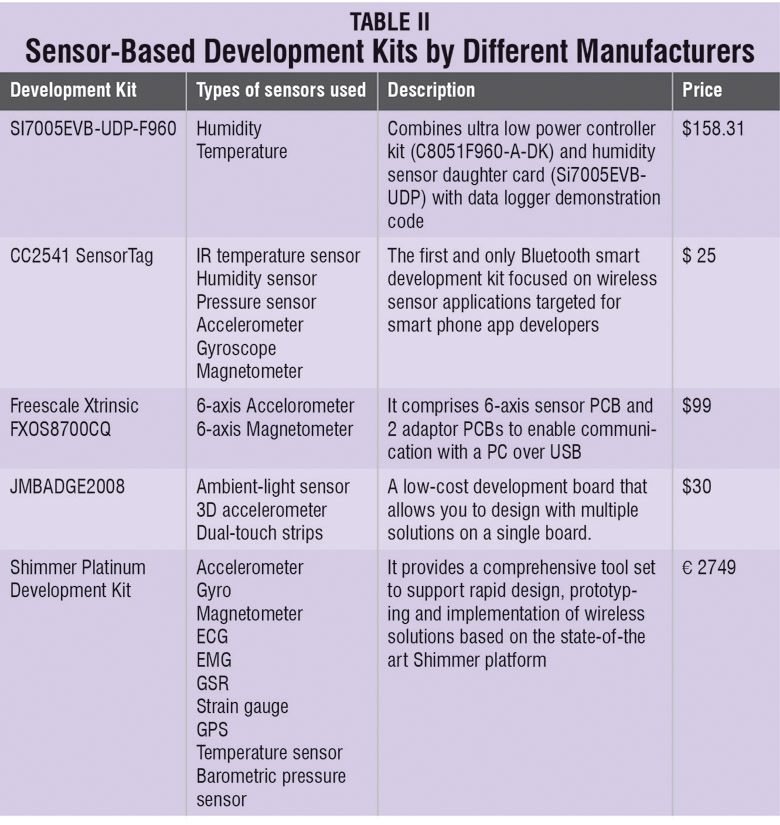 with the older brands that brought some amazing innovations in this field.

1. ARM has come up with ‘Sensor Bubble’ that is supposed to surround car drivers in order to keep them safe whilst driving. It allows the driver to slow down safely in case of a tire burst (for example) and would send an RFID signal to the traffic following to alert the other drivers to slow down too; the signal would also go into the drivers’ GPS to suggest them an alternate route.
2. Open Geospatial Consortium (OGC) came up with ‘The Sensor Web Enablement Initiative.’ As per this initiative, the web service is interfaced with data coding in order to create building blocks for a worldwide sensor web that would create a framework of open standards and allow diverse web-connected sensors. This would also provide sensor systems that can be accessed in an independent, interoperable platform and would provide a uniform way for use in remote sensing, disaster management, public safety, environment monitoring and many other different applications.
3. SENSUSS came up with S3, which is a wireless helmet-mounted impact logger for car and bike racing drivers. It transmits data to the Eurotech Everyware Cloud so that it can be used to provide instant information on the level of the impact that an athlete experiences, in case of a crash, to the coaches, parents and even to the doctors.
4. Raytheon’s Space and Airborne Systems that builds radars and other sensors for aircraft, ships and spacecraft is in a contract with ISRO to modernise the Indian air navigation system.
5. Autonics India has come up with CNE series sensor connectors that increase productivity by decreasing workforce and work time by 50 per cent.

Select with care
Sensor selection is very important for a design engineer, and we hope this article would help you select the right one. Priya, explains, “Most products that are user based are supposed to be started with the end-effector in mind. However, real-life situations are supposed to be considered whilst picking a sensor.” Priya goes on to share a recent problem which her team went on to solve, “A recent project had us using a simple IR to control lights for a dance choreography piece, but at the last minute it startedmisbehaving at the big stage. That gave us a very important wireless design lesson—always have a hard switch too installed in the product just in case wireless fails. We did save the day by re-doing the circuit that night!”

Sneha Ambastha is a technical journalist at EFY Gurgaon, while Dilin Anand is senior technical correspondent at EFY Bengaluru