In the summer of 1985, I completed my first year of B.Sc.(Electronics) the course at ARSD College, University of Delhi. We were the first batch of this course which was started at four colleges of Delhi University (ARSD College, Sri Venkateswara College, Rajdhani College, and Ramjas College). Being the first batch, no one had any clue about the laboratory experiments and so the first year was boring and totally uninspiring. No wonder, I spent the summer of 1985 doing odd jobs such as working for a market research company and at another time, selling electronics tools to electronics product companies across Delhi but mostly in the Okhla Industrial area.

Sometime in July 1985, before the next session started, I was browsing books on a Sunday afternoon at the famous Daryaganj Sunday Book Bazar and I came across a recent issue of Electronics for You (EFY). I clearly remember the contents of the article by L. Jagadhiswar Rao who had a transcript of something called ‘Ham Radio’ conversation between an Indian Ham stationed in Antarctica and another in Chandigarh. I did not know what Ham Radio was and I couldn’t make much sense of the transcript. This chance reading turned out to be great serendipity.

I have not been able to locate that particular article but a similar article by the same author published around the same time frame looks like the following. 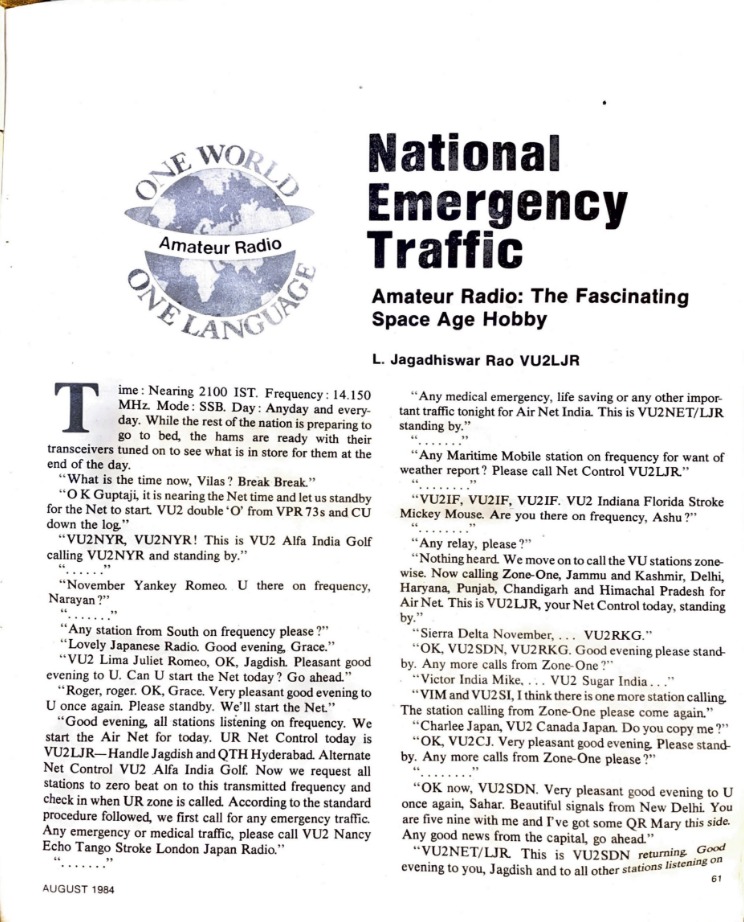 As you can see, the conversation contains far too many codes for a normal person to understand. In that particular article, the author urged the readers to look for his articles in previous issues of EFY to know more about the hobby and clubs across India that promoted Ham Radio. I was fortunate that my college had back issues of EFY and I browsed through all of them and found an article by the same author with details of Ham Radio and the said addresses of Ham Radio clubs in India. 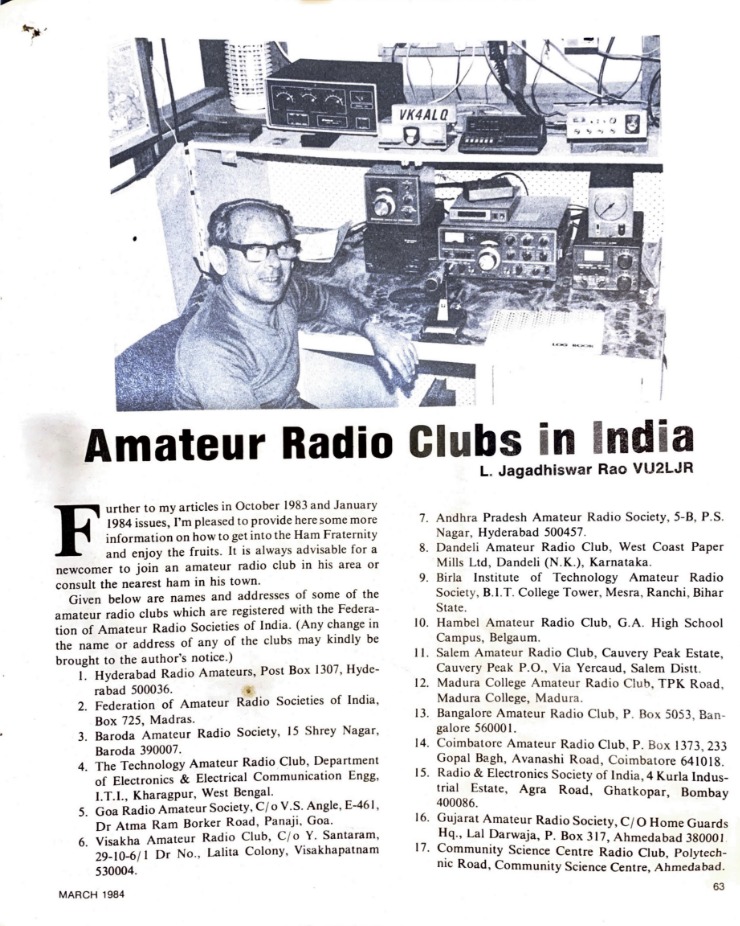 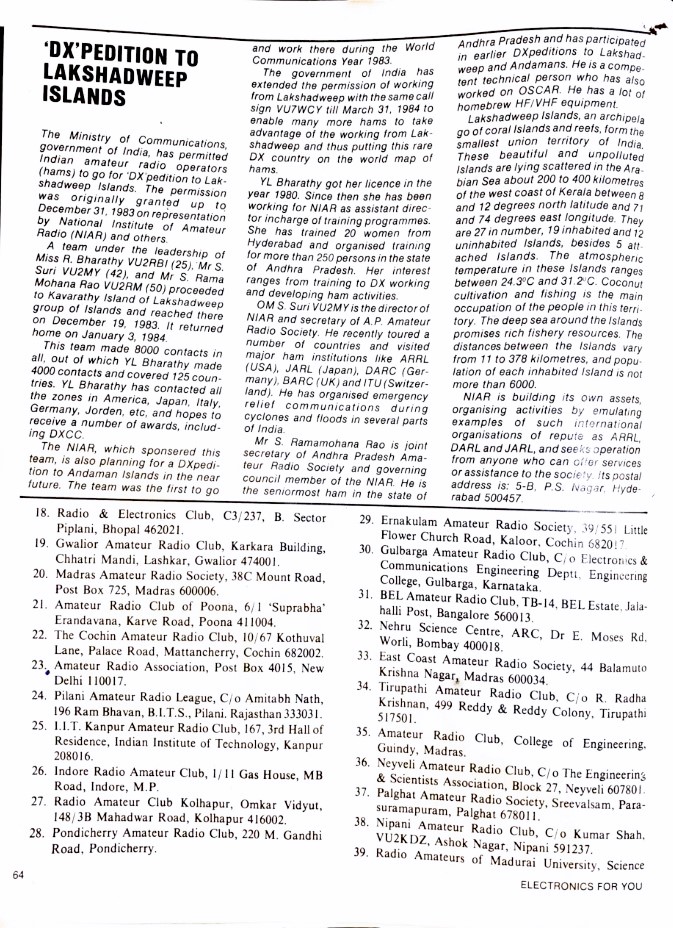 On the second page, I found a club listed for Delhi but with a postbox address. I wrote them a postcard evincing my interest in meeting them and knowing more about the hobby. After a few months, I received a printed ‘inland letter’ signed by one Anand Chaturvedi who informed me about the location of the club (it was located at the erstwhile Appu Ghar at Pragati Maidan in Delhi) and I was welcome to visit them on a weekend as that was the time they all met.

In early October, I paid them a visit and one of the volunteers showed me their club and the radio station. He even turned on the HF transceiver and let me hear the same cryptic, coded conversation except in real-time. I came to know that the club was presided over by one Dr. Ahutosh Singh (VU2IF) and it turned out that he was the same gentleman about whom I had read about in the 1985 issue of EFY on Ham Radio by Jagadhiswar Rao! I thought this was too much of a coincidence and maybe there was a larger motive and purpose behind this.

I became a regular member of this club – Amateur Radio Association and met Dr. Ashutosh Singh soon. He turned out to be a great mentor. Although a Ph.D. from IIT Delhi in condensed matter physics, Dr. Ashutosh Singh was interested in building scientific instrumentation. Dr. Ashutosh Singh is one of that rare breed of people who work silently without seeking public approval of their work nor seek stardom through political maneuvering. Apart from mentoring 100s of people like me, he was a (non-governmental) member of the 2nd and 3rd Indian expeditions to Antarctica.

I was impressed with all the developmental activities going on at the club (they were building HF and VHF transceivers). Dr. Singh induced me to build a power supply for future Ham Radio projects and I went from a simple transformer + rectifier + filter power supply to one with electronic regulation and fold back current limiting feature. I soon got 5-6 classmates involved in Ham Radio. We all learned Morse Code (and practiced communicating in Morse in the classroom by tapping on the desk) and appeared for the Amateur Station Operators’ License exam conducted by the Wireless Planning and Coordination wing of the Ministry of Communications and got the license in about 1-1/2 years.

More than Ham Radio itself, I got hooked on electronics and that love and fascination for building circuits have lasted a lifetime and have had a very enjoyable and successful career around electronics. I have an epiphany that the chance reading of an EFY article and sending a 15 paisa postcard is akin to what people say – when you want something, the entire universe conspires in helping you to get it.

Today I visited EFY offices at Okhla Industrial Area to take pictures of old EFY issues that I have shared here in this blog and I thank Rahul Chopra, the CEO of the Electronics for You group for facilitating the visit.