Is Einstein Turning In His Grave?

There is a furore in the physics community following an announcement by the Gran Sasso National Laboratory that they have observed neutrinos travelling faster than light. This could open possibilities to send information back in time, time travel and much more -- Janani Gopalakrishnan Vikram

It was indeed haunting to see some of the world’s greatest scientists waving their hands in frenzy and saying “If this is true, we would have to tear up all our textbooks and rewrite them.” There was a lot of excitement too as the new finding meant lots and lots of new research.

Would you believe that a shy little neutrino is at the heart of all this discussion? “Neutrino is an anti-social particle which doesn’t like to talk to the world in general. We are crossed by millions of neutrinos every second, but we don’t feel them,” said Prof. Joao Magueijo of the Imperial College of London, when interviewed for a BBC documentary. The show’s anchor put the neutrino more in perspective (or out of it) by saying, “If the atom is the solar system, the neutrino is a golf ball.”

Neutrino is tiny. It is almost weightless, with no electric charge and capable of travelling through solid matter without reacting with anything. In short, it is inconspicuous. However, this miniscule sub-atomic particle recently created a furore in the physics community as some scientists in Northern Italy observed neutrinos to have travelled faster than light.

If you browse through any physics, computer science, optics, electrical, electronics or communication engineering handbook, or any other encyclopaedia, you will realise that modern science is based on Einstein’s theory that the speed of light in vacuum is absolute, and nothing with mass can ever travel faster than light. Whether you recall it by the name of special relativity or the formula E=mc2, we owe it to Einstein for having unravelled the mysteries of space, light, speed, time and many of the other concepts we take for granted today.

However, an unexpected event has now cast a slight shade of doubt upon Einstein’s theories. It is too early to dispute the father of modern physics yet but here is all the information you need to understand this affair as it unfolds in newspapers and journals in the coming months.

One fine day, in the heart of a large mountain…
The Gran Sasso National Laboratory (LNGS) is situated in a national park in Northern Italy, deep within a large mountain. It has a 1400-metre rock cover above it making the lab almost free of cosmic ray flux. The neutron flux is also thousand times less than on the surface, thanks to the very little uranium and thorium content of the dolomite rocks of the mountain. LNGS is the largest underground laboratory in the world for experiments in particle physics, particle astrophysics and nuclear astrophysics with over 750 scientists working on various experiments.

The team that grabbed our attention with its findings is working on the Oscillation Project with Emulsion-tRacking Apparatus (OPERA). The OPERA experiment involves the study of neutrino oscillations. A high-intensity and high-energy beam of muon-neutrinos is produced 730 km away at CERN in Geneva and directed towards the Gran Sasso laboratory. A wall comprising 150,000 bricks of photographic emulsion films interleaved with lead plates (each weighing more than 8 kg) and other complementary apparatus, like trackers and oscillometers, detects the appearance of tau-neutrinos from the oscillation of muon-neutrinos during their 3-millisecond (ms) travel from Geneva to Gran Sasso.

The OPERA apparatus has been collecting data since 2008, but in March 2011 the researchers noticed something strange. The neutrinos fired from Geneva apparently arrived at Gran Sasso around 60-billionth of a second earlier than light in vacuum!

A tortoise raced the hare
Why should we bother about a speed of this magnitude? Simply because it goes against the founding principle of modern physics that “nothing can travel faster than light in vacuum.” If the findings are right, it would wreak havoc on the principle of cause and effect. It would make it possible to send information back in time, blurring the line between past and present. Time travel, space contraction, the conversion of mass into energy and a lot of other things that were once the realm of science fiction would become reality! 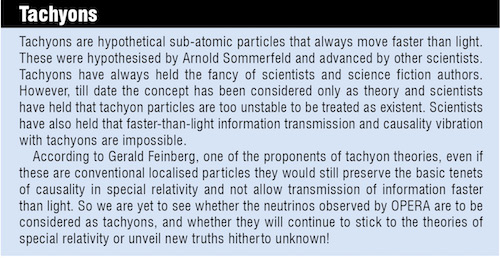 The scientists at Gran Sasso conducted more experiments and in September 2011, on achieving similar results repeatedly, they made their findings open. They requested other laboratories to analyse the results and share their opinions, as well as try and replicate the experiments. At the same time, they spotted various areas where their experiment might have failed, with the intention of ruling out all possible weaknesses. In November, they repeated the experiment with improved conditions—in the process ruling out at least one of the potential faults in the first experiment. The neutrino won the race again.