By Sanjay Banerjee--The author is passionate about how businesses can benefit from technology. He is a tech enthusiast and a senior business leader at EFY.

“I think there are more politicians in favour of electric cars than against. There are still some that are against, and I think the reasoning for that varies depending on the person, but in some cases, they just don’t believe in climate change—they think oil will last forever.” — Elon Musk, CEO of Tesla Motors and SpaceX

Are we seeing any changes in the way people address the global warming crisis, or are we yet to see them? That is the question. Whether you happen to be optimistic or not about the world’s response to climate change, there is little doubt that the world is moving briskly towards a greener culture. From how we grow our food to how we make our cars, we are going green. We are also, slowly but surely, committing ourselves to a greener future, backed by the agreements that nations are signing to make this happen.

India is committed to the Paris Agreement on climate change, and the government is taking quick steps towards complying with its requirements. This April, Union Coal and Power Minister Piyush Goyal stated that India will turn into a 100 per cent electric vehicle (EV) nation by 2030! As a follow up to this commitment, the National Electric Mobility Mission Plan (NEMMP) has made a roadmap that envisions the country building up its capabilities sufficiently to manufacture 7 million electric and hybrid vehicles by 2020. This would really help to cut down the import of fossil fuels, and reduce the pressure that the oil bill places on India’s foreign exchange reserves.

It is anticipated that our dependence on other forms of fuel will increase too, and renewable energy sources will play a huge role in the nation’s march into the future. If such projections hold true, it will be a marked improvement from India’s current state of heavy dependence on fossil fuels.

The graph in Figure 1 indicates that renewables will be the main source of energy and power in India by 2040, with a 35 per cent share. If the government vision of 100 per cent EVs by 2030 turns into reality, these vehicles will play a big role in the renewable energy sector. 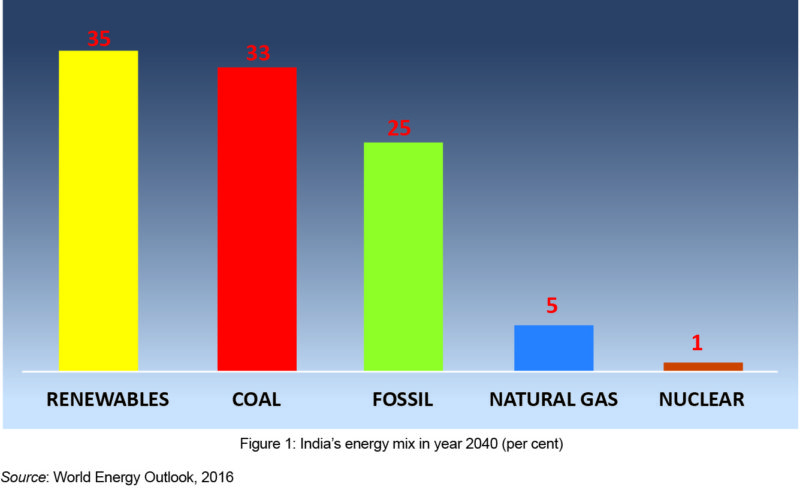 Now, let’s take a broader view, and consider the leading countries in the world that have taken to EVs and contributed to this segment’s growth.

This is a country that has challenged the norms in every industry. In every field, it has rewritten the rules and emerged as a leader and, hence, is unlikely to get left behind in the EV race! China has easily overtaken USA in this field because of the increased adoption of EVs, both in terms of manufacturing capabilities and usage within the country. And government policies conducive to environment protection have helped in its adoption.

There are cities in China that have strict rules for new vehicle purchase and retrenchment. And above all, China is a leader in the deployment of electric public buses. This has been helped by the government’s involvement in creating the relevant infrastructure across multiple destination points. This is proof today that even large economies heavily invested in legacy systems dependent on fossil fuels can adapt to change if there is a strong political will.

But do we want to follow the China example, because there have been some fallouts to China’s speedy adoption of EVs. A recent report from Amnesty International is a dampener for those eager to emulate China’s example. The report stated that China’s Huayou Cobalt Company relies heavily on child labour and slavery to mine cobalt used by the Li–ion battery manufacturers, including Korean giants like LG and Samsung. If such inhuman practices are adopted to fuel growth, we need to question the Chinese logic.

China’s growth in the electric vehicle sector started in 2012, with sales of just 3000 EVs —a paltry figure that has nevertheless propelled the country into topping the world charts in terms of EV adoption and usage. As I write this article, I am being updated by my international bureau that Chinese companies like BYD, a leading manufacturer of buses, are building up a manufacturing presence in countries like Thailand, Brazil and US, which means that they are now looking at creating brands for global markets. Other firms like Foton Buses have gone a step ahead in EV innovations, using the Microvast technology in their batteries, which enables ultra-fast charging.

These are good days for the Chinese EV industry, and many new entrants like Kandi Panda are completely overhauling the way people travel today. These companies are differentiating their products on the basis of low costs and a low carbon footprint in the congested Chinese cities. And going forward, there may be a day when Interbrand will report a Chinese EV manufacturing brand among the Top 10 list of global EV brands.