Tiny wireless devices and the enormous growth of wireless communication technologies have already established the stage for large-scale deployment of wireless sensor networks (WSNs). A typical WSN consists of a large number of small, low-cost sensor nodes, which are distributed in the target area for collecting data of interest. Most of the time, WSN is used for monitoring, tracking and event management related applications. WSN is not a new topic as many inventions have been done and countless applications have been successfully implemented.

Fig. 1 and Table I show the similarities and differences between ad hoc wireless networks, wireless sensor networks and wireless multimedia sensor networks (WMSNs). All these networks are used for small-scale and medium-scale networks that do not require a fixed architecture and can be deployed temporarily. WMSN requires a novel architecture, and the advanced protocol design and algorithms need to be implemented to fulfil the criteria. This article exposes the internal structure of the multimedia sensor node, architecture of WMSN, their challenges, research opportunities and applications.

Internal structure of the multimedia sensor node
Normally, a multimedia sensor device includes a sensing unit, processing unit (CPU), communication module, co-ordination sub-system, storage unit and an optional mobility/actuation unit. Sensing units usually have two sub-units: sensors [digital micro cameras, microphones and/or scalar sensors (for example, temperature sensors, humidity sensors, fire sensors, pressure sensors and gas sensors)], and analogue to digital converters (ADCs). Most of the sensors generate analogue signals which should be converted into digital form by using ADCs as these are to be fed into the CPU. 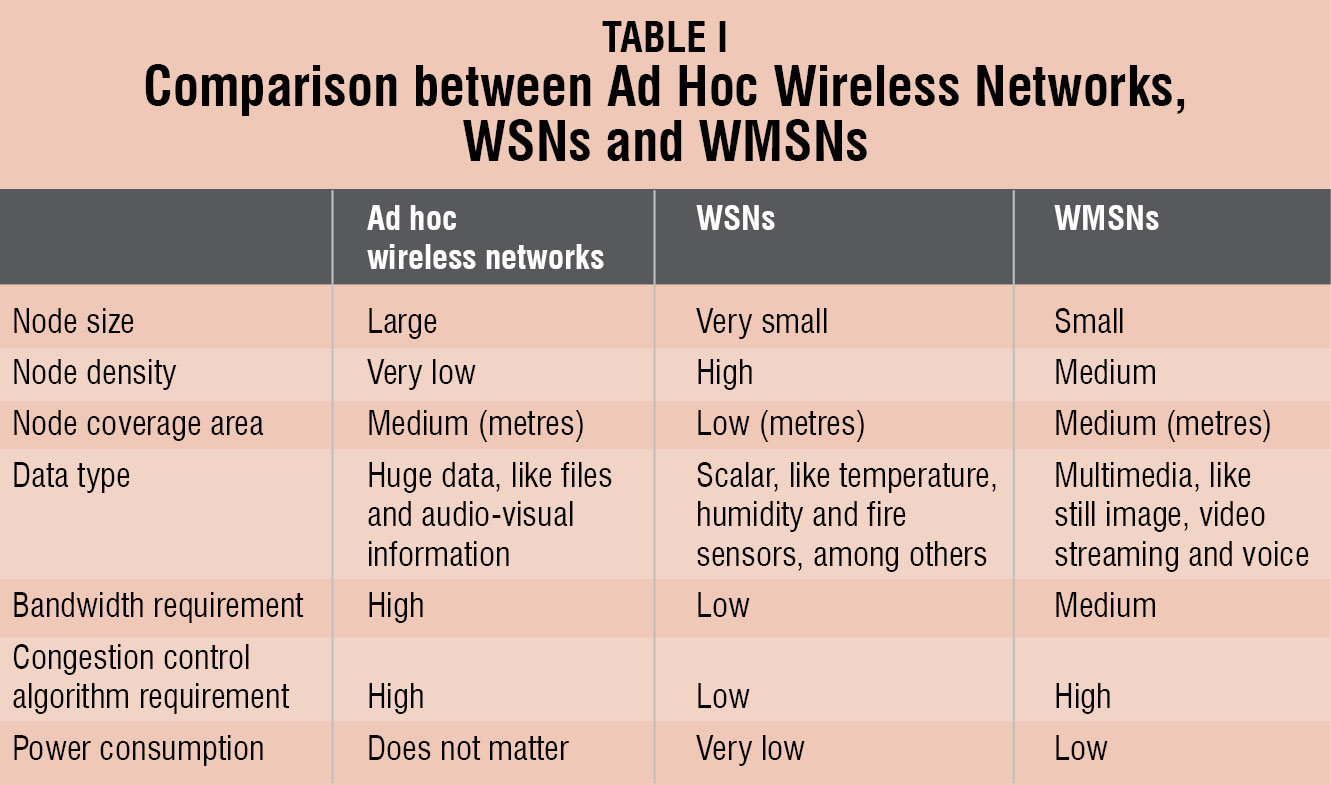 The CPU executes the system software in charge of coordinating sensing and communication tasks for signal processing, and it is interfaced with a storage unit. A communication Tx/Rx module interfaces the device to the network. In many applications, it has been observed that around 70 per cent of the battery is consumed for transceiver processes and the remaining 30 per cent consumption includes computational tasks, signal processing, co-ordination systems and sensor sub-units.

A coordination sub-system coordinates the operation of different network devices by performing various tasks, such as network synchronisation and location management. A mobility actuation unit can enable the movement or manipulation of objects, like motor, to track the object. The whole system is powered by a compact power unit that may be supported by an energy-scavenging unit, such as solar cells. Table II gives an overview of the features of hardware platforms for WMSNs.

WMSN architecture
Fig. 3 shows the reference architecture of a WMSN, which is classified as single-tier and multi-tier architecture. Before we discuss further, it is important to know about the functionality of all components used in this architecture.

Standard audio and video sensors capture sound, still or moving images and videos of low resolution. Scalar sensors are another type of sensors that sense scalar data and physical attributes, such as temperature, humidity and pressure, and report measured values to their cluster head. These are typically resource-limited devices in terms of energy consumption, memory storage and processing capabilities.

Multimedia processing hubs behave as cluster heads. These devices have comparatively large computational resources and are suitable for aggregating multimedia streams from individual sensor nodes. This can be done by various algorithms implemented in it. Algorithms are capable of managing flow of control (frames per second) by adding and discarding frames. Finally, it is capable of reducing both the dimensionality and volume of data conveyed to the sink and storage devices.

The storage hub allows data mining and feature-extraction algorithms to recognise essential characteristics of the event, even before the data is sent to the end user. The sink is a common data-gathering point of IP-less networks. It also supplies filtered data to the user at the remote end, gathered by a WMSN. Multiple sinks may be required in a large or heterogeneous network.

The gateway creates a bridge between an IP-less network and IP based network. It is an IP-addressable component of the WMSN. It gives permission to the user to monitor and control the WMSN from a remote location as it has an IP address and the capability to create a connection with the Internet.

At the end, users are at the highest end of the hierarchy. They are typically identified through their IP addresses and run application-level protocols and software that assign queries and display results obtained from the WMSN.

Single-tier means the network is without hierarchy, and cluster is directly connected with the sink. Figs 3(a) and 3(b) show a single-tier architecture, which can be arranged in a flat or clustered manner. Flat topology means all nodes have essentially the same role.