Let us take a look at what a minute looks like to a Big Data analyst.

Looks like a lot of big numbers just for social media. Even with this rise of social media, millions of emails are still sent every minute. Despite an estimated international Internet connectivity at about 3.2 billion, those are some very huge numbers. So where does this data go?

Storing all recorded information requires heavy-duty data storage devices. This is usually done in data centres. Once stored, accessing these is another concern, which calls for specialised data storage devices with ultra-high-speed data-access capabilities. These have to be easily accessible with fast and accurate calculations and analytics being done on these.

Onboard, the memories forgotten. Bulk storage of data calls for huge storage spaces. This increases the access time even with the best of systems. Solution to this comes in the form of various onboard memories, ranging from random access memory (RAM) to registers, which are very fast, and hence improve the computational calibre of the system.

We often fail to consider onboard memories while discussing storage. Consumerisation of memory has provided easy access to storage devices like thumb drives and external hard disk drives (HDDs), making registers and embedded memories just for design and development engineers. With data speeds of about 400MB/sec under ideal conditions, these are still far behind embedded dynamic random access memory (DRAM). 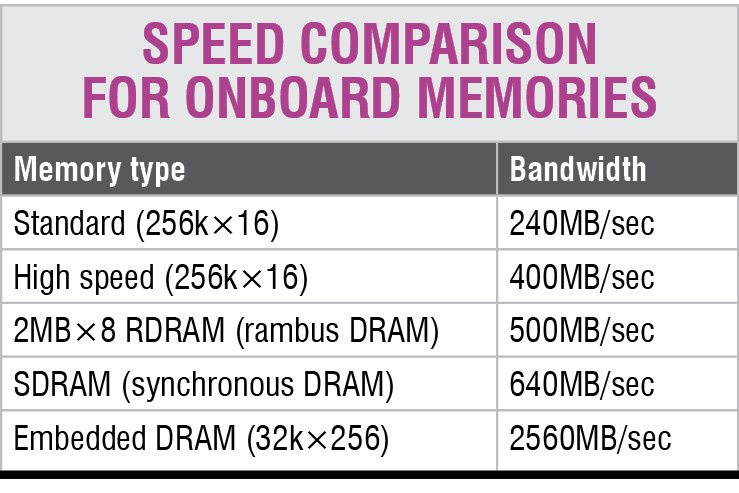 Today we have a lot of memory devices ranging from multi-TB hard drives to registers in kilobytes that have to be designed and developed according to the processing capabilities. Vivian Singh, chief executive officer, Strontium Technology India Pvt Ltd, adds, “Storage products need to meet the physical settings and fulfil the performance/behaviour with various hosts.”

Any storage can be measured on the basis of three basic factors. First, cost of the memory module must be very low; second, it has to be very fast; and third, it has to be able to store data when power is switched off, that is non-volatile.

Development challenges. Memory is an integral part of any electronic system. Hence, there is a need for memory to be fast and sized according to the application. Additionally, according to Singh, “There is always the challenge to bring the laboratory experiment to practical and actual mass production.” On one hand we can create an ideal memory in the lab, but on the other if it raises production challenges, it would not help in the development of storage.

Designing the system and employing memory. Once developed, implementing the memory into devices is another concern. Suitable buses are required for data access that do not compromise data access speeds.

Memory design has to follow certain guidelines in order to comply with the standards. While this helps with efficiency of the memory, it restricts design. According to Singh, “Integration will be mild since it has to abide by the standard form factor laid by the associations.”

A look at the developments

We can all accept the fact that NAND flash came as the turning point for memory. Since then it has seen many changes, and today we have 512GB in a micro-SD-size form factor. Such additions and changes in the basic structure of memory have made it more lucrative and affordable for the user.

Popularisation of SSD. With the commercialisation of SSDs, there has been a rapid change in the way our devices work. “When we talk about SSDs, previously there was only SLC technology that was primarily targeted at the enterprise sector. It is further being evolved into MLCs, eMLCs, TLC, 3D TLC NAND and now M.2 form factor based SSDs targeted at both commercial and civil sector,” says Prijo Samuel, senior consultant global electronics, 6wresearch.

Kingston DataTraveler MicroDuo 3.0 and SanDisk iXpand flash drives are some products that allow a user to access data to and from smartphones and tablets. OTG compatibility makes these devices versatile and allows a user to free memory in urgency.