Antenna polarisation (or polarization) is a very important consideration when choosing and installing an antenna and can mean as much as a 20db in signal loss if the receiver and transmitter antenna are not using the same polarisation. Most systems use either vertical, horizontal or circular polarisation.

Suppose an electromagnetic wave, radiated by an antenna, has an electric field E ( a vector) with two components: E x and E y. 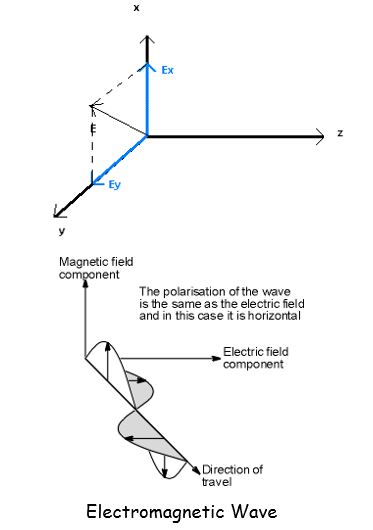 An antenna is a transducer that converts radio frequency electric current to electromagnetic waves that are then radiated into space. The electric field plane determines the polarisation or orientation of the radio wave. In general, most antennas radiate either linear or circular polarised.

A linear polarised antenna radiates wholly in one plane containing the direction of propagation. Where a circular polarised antenna, the plane of polarisation rotates in a circle making one complete revolution during one period of the wave. If the rotation is clockwise looking in the direction of propagation, the sense is called right-hand-circular (RHC). If the rotation is counter clockwise, the sense is called left-hand-circular (LHC).

An antenna is said to be vertically polarised (linear) when its electric field is perpendicular to the Earth’s surface. An example of a vertical antenna is a broadcast tower for AM radio or the “whip” antenna on an auto-mobile. Horizontally polarised (linear) antennas have their electric field parallel to the Earth’s surface. Television transmissions use horizontal polarisation

Circular polarised wave radiates energy in both the horizontal and vertical planes and all planes in between. The difference, if any, between the maximum and the minimum peaks as the antenna is rotated through all angles, is called the axial ratio or elliptically and is usually specified in decibels (dB). If the axial ratio is near 0 dB, the antenna is said to be circular polarised, when using a Helix Antenna. If the axial ratio is greater than 1-2 dB, the polarisation is often referred to as elliptical, when using a crossed Yagi.

What polarization is required?

Most communication systems use either vertical, horizontal or elliptical (RHC-right hand circular or LHC-left hand circular) polarization, with vertical dominating commercial VHF/UHF applications. In some instances, the selection is determined by the installation site, with the antenna oriented to provide the best performance. If this is anticipated, your antenna should provide mounting for either polarization.

Selecting the proper polarization for the system can enhance the overall performance by minimizing the interference from adjoining systems. For example, by installing you system orthogonal to other systems in the area, you can provide up to 20 dB of isolation. This will result in up to a 99% power reduction of the interfering system! Elliptical polarization can sometimes decrease fading.

Many systems are challenged because they must interface with handheld transmitters. These units move around a room or warehouse, with the antenna often pointing many degrees off-axis. To accommodate these application, the fixed antennas often use circular or elliptical polarization with a hemispherically shaped pattern trading off high gain for reasonable gain in all directions. 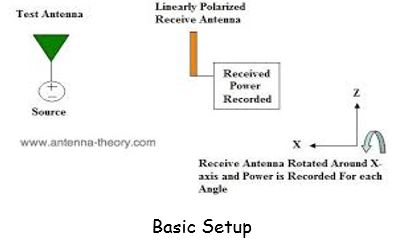 Polarization is an important design consideration. The polarization of each antenna in a system should be properly aligned. Maximum signal strength between stations occurs when both stations are using identical polarization.

On line-of-sight (LOS) paths, it is most important that the polarization of the antennas at both ends of the path use the same polarization. In a linearly polarized system, a misalignment of polarization of 45 degrees will degrade the signal up to 3 dB and if misaligned 90 degrees the attenuation can be 20 dB or more. Likewise, in a circular polarized system, both antennas must have the same sense. If not, an additional loss of 20 dB or more will be incurred.