What is the Difference Between Augmented Reality and Virtual Reality?

Augmented reality (AR) is an enhanced version of reality created by the use of technology to add some digital information on an image. Or else we can say that AR is a live direct or indirect view of a physical, real-world environment whose elements are augmented by computer-generated perceptual information.

Virtual reality (VR) is a completely computer-generated scenario that simulates a realistic experience. In simple words, it is an artificial, computer-generated simulation/recreation of a real-life environment. VR generates realistic images and sounds that put you in the middle of a spectacular imaginary world. AR adds virtual stuff to the real-world environment. The differences between the two are listed in the table on this page. 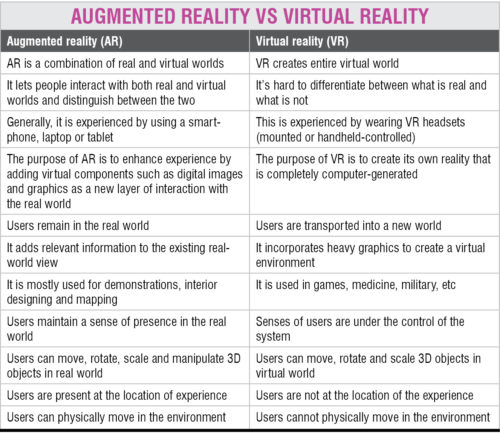 Q. What are the largest advancements in Nanotechnology for IC design?

Ans. Nanotechnology allows integrated circuits (ICs) or chips to be made on nanometre scale. Semiconductors are witnessing a very fast technological progress, and so is nanotechnology in IC designs.

The technology node, or simply node, refers to a specific semiconductor manufacturing process and its design rules. Smaller node generally means the smaller feature size, and smaller, faster and more power-efficient transistors. Recent technology nodes such as 16nm and 14nm are already being used in foundries. Going a step further, the smallest commercial chips now use 10nm technology.

Nanotechnology is still evolving but some of its most promising innovations include nano-based manufacturing of devices and nanoparticles that have potential applications in military, battery technology and replacement of traditional electronics devices. You can find many products that rely on nanomaterials and processes. Some examples are given below:

1. Nanomaterials-based flexible, foldable, rollable and stretchable electronic products are being integrated into a variety of products for wearables, consumer electronics, medical, aerospace and the Internet of Things (IoT) applications.

2. IBM scientists have created a 3D map of the earth that is so small that its 1000 copies could fit on one grain of salt. This is accomplished through a new technique that uses a tiny silicon tip to create patterns and structures as small as 15 nanometres.

3. Transistors are getting smaller and smaller in sizes through advancements in nanotechnology.

5. A nanoscale field-effect transistor (FET) has been fabricated with carbon nanotubes. This FET has demonstrated an excellent performance of a low-voltage drive operation even at as small as 100nm of channel length.

7. Textile manufacturers have begun to use nanomaterials in washable, durable smart fabrics equipped with flexible sensors and electronics for health monitoring, solar energy capture, and energy harvesting through movement.