At one time, in wireless the term “MIMO” referred to the use of multiple antennas at the transmitter and the receiver. In modern usage, “MIMO” specifically refers to a practical technique for sending and receiving more than one data signal simultaneously over the same radio channel by exploiting multipath propagation. MIMO is fundamentally different from smart antenna techniques developed to enhance the performance of a single data signal, such as beamforming and diversity.

The presence of multiple reflections and multiple communication paths between two radio terminals cause signal fading impairments to a wireless communication link.  There is both selective and non-selective fading.  Non-selective fading is the case where the frequency components over the signal bandwidth are dynamically attenuated by the same amount and do not create any signal distortion, but only temporal signal loss.  Selective fading is the case where smaller frequency segments of the signal’s spectrum are attenuated relative to the other remaining frequency segments.  When this occurs, the signal spectrum is distorted and this in turn creates a communication impairment that is independent of signal level.

This fading is produced by the arrival of multiple replicas of the transmitted signal at the receiving antenna. The signal replicas are produced by multiple random reflections within the communication medium, such as an indoor communication channel.  The multipath concept is shown below in Figure 1 for reference and is based on the notion of an ellipsoidal fading model 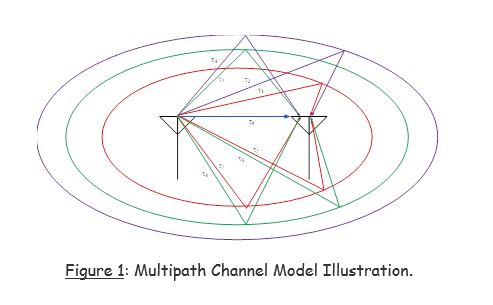 As mentioned previously, the effects of this localized and sudden attenuation can compensated by receiving  the signal at two different receiver antenna placement locations and selecting the best antenna based on the signal strength or some other receiver performance measure. The diagram Figure 2 illustrates this situation by showing the signal strength at two different antenna placements over communication range and/or time.  The point of the illustration is that the signal strengths associated with the antennas are generally not correlated in time and/or space and when one signal is in a null, the other can be found near a maximum and selected for communication.

MIMO makes use of the advantages of having several antennas and a range of signal paths. Usually in a wireless link the strongest signal is chosen to make the connection, and all the other signals are filtered out. These multipath reflections come from reflections from buildings and objects, but they are weaker and arrive at different times. In a system with antenna diversity, different antenna pick up the different signals, filter out the noise, and recombine them to generate a single, stronger signal.

Today’s MIMO employs a slightly different approach, but still uses multiple antennas. In the basic MIMO concept for 11n Wi-Fi, the data to be transmitted is scrambled, encoded, and interleaved and then divided up into parallel data streams, each of which modulates a separate transmitter. Multiple antennas then capture the different streams, which have slightly different phases because they have travelled different routes, and combine them back into one.

Each multipath route can be treated as a separate channel, and the separate antennas take advantage of this to transfer more data. In addition to multiplying throughput, range is increased due to the advantage of antenna diversity, since each receive antenna has a measurement of each transmitted data stream.

With MIMO, the maximum data rate per channel grows linearly with the number of different data streams that are transmitted in the same channel, providing scalability and a more reliable link. This robustness allows the system to scale back the current to achieve the required data rate with minimal power consumption.

For Wi-Fi, the modulation is orthogonal frequency division multiplexing (OFDM) using binary phase-shift keying (BPSK), quadrature phase-shift keying (QPSK), 16-phase quadrature amplitude modulation (16QAM), or 64QAM, depending on the data rate. Different data streams then can be transmitted in the same 20 MHz in the same band, improving throughput. Throughput scales linearly with the number of transceivers.