Make no mistake—LEDs are the lighting devices of the future! With LEDs, lighting becomes electronic—replacing a technology that has seen few changes over the past 100 years or so. Light-emitting diodes are powered by low direct current and, therefore, do not easily fit into our mains systems. To operate them, you need efficient drivers that convert the power from the wall socket to the power level required for LEDs. As most drivers are not visible, their role is rarely recognised. However, for the lighting systems of the future, they are as important as engines are for cars. Nothing works without them -- Stephen Wegstein

Incandescent lamps are on the way out and are being replaced by energy-saving CFL bulbs. Only a few years ago, these devices were hailed as the solution to our energy problems. Since then, they have lost some of their sheen as it emerged that dangerous mercury vapour gets released when the glass is broken. In addition, it takes a while for them to warm up and to emit their full light. Besides, the energy-saving bulbs cannot be dimmed.

The McKinsey report on energy efficiency is probably right in predicting that LED technology will replace energy-saving bulbs in a few years. There has been tremendous progress in the development of LED technology over the past five years. 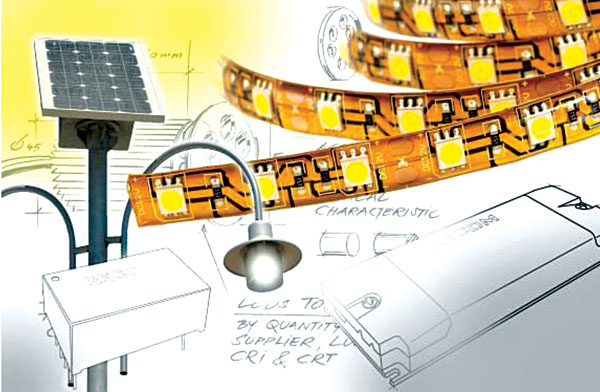 Today, electronic lighting systems are leading the field when it comes to efficiency and lifetime. In addition, they offer designers virtually unlimited new possibilities in lighting control and luminaire design. Just as in cars, where the body around the engine can be designed in any shape or colour, LED drivers play a crucial role in lighting up the world around us. In a car, the energy contained in the fuel is converted by the engine into movement. LED drivers convert any given voltage into a constant current that makes the LEDs light up in the desired brightness and colour.

LED technology at a glance
Each LED requires a threshold voltage of just above 3V. As this value varies slightly even between LEDs with the same design, the luminous efficacy is always proportional to the actual current. LEDs are generally installed in series and powered by a constant current. All LEDs are thus lit with the same brightness, which is important for homogenous lighting.

As LEDs are available with different power ratings, the drivers must produce different constant currents to operate them. One-watt LEDs require 350mA, while 2W LEDs need 700mA. The maximum output voltage of a driver thus determines the number of LEDs that can be operated in series.

There are currently various products known as ‘multichip arrays’ that combine a number of low-power ‘LED dies’ on a 2-square-centimetre ceramic disk. The disk is covered in a phosphorus coating so that the individual light sources appear as one. Multichip arrays require a voltage of around 40V and a constant current of 500 or 700mA, depending on the power rating.

Another type of LED lighting device is the flexible light strip, which is available in any length and is often used for indirect lighting. Three or six LEDs are combined into short strings that are supplied with constant current through tiny driver chips. Several such strings can be combined to form light strips. To supply these light strips, special lighting-class power supplies that are certified according to EN 61000-3-2 class C are required.

Greater flexibility thanks to new buck/boost drivers
In battery-operated lighting systems, there is often the problem of the voltage dropping as the battery becomes discharged. Let us assume that we wish to design a luminaire consisting of seven LEDs powered from a 24V solar battery. Early in the evening, when the battery is fully charged to 27V, there is sufficient reserve to power the LEDs through a buck driver. As the charge drops over the course of the night to about 24V, the light becomes weaker long before the battery is actually fully discharged, as the driver alone requires about 1V to 2V. Until now, all one could do was eliminate one LED, and with it 15 per cent of the light output!

To overcome this problem, an innovative buck/boost driver automatically switches to the correct mode based on the available voltage. Returning to the above example, when the battery voltage drops below a minimum level of 22V or 23V, the driver automatically switches to boost mode so that the entire battery charge can be used to operate the LEDs. The hybrid LED driver can be connected to an input voltage of between 8V and 36V DC, and provides 2V to 40V DC and a constant current of 350mA or 500mA at the output. Its efficiency is around 92 per cent.