Will Biosensors Sensitise The Indian Market?

Biosensors are analytical devices that combine a bioreceptor (biological recognition element) and a transducer. The bioreceptor can be organisms, tissues, cells, enzymes, antibodies, nucleic acids, etc. It detects the target analyte. The transducer can be electrochemical, optical, thermal or mechanical in nature. It converts the detected analyte into a measurable signal. Therefore biosensors involve cross-functional interaction among disciplines such as electronics, electrical engineering, biology and chemistry.

Biosensors offer high-quality output, accuracy, precision, specificity and sensitivity within affordable prices. These are considered as essential devices with the ability of quick detection. They are ideal for providing low-cost, easy, quick and portable solutions.

In a typical biosensor, the biological recognition unit interacts with biological samples/bio-elements, which include enzymes, living tissues and antibodies. Subsequently, transducers transform the signals generated from this interaction into an electrical signal. 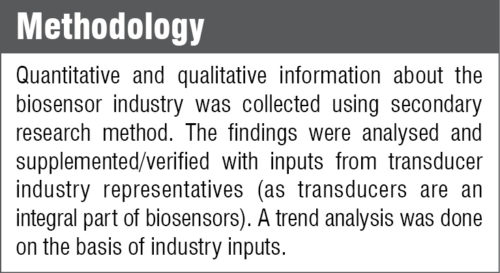 According to AMERI Research, the global biosensors market was valued at $15.4 billion in 2016 and will significantly grow at 9.2 per cent per cent annually to reach $31 billion in 2024 (Fig. 1).

In terms of value, North America leads the market with a share of about 37 per cent in 2015. High disease burden and the subsequent need to curb associated healthcare expenditure has resulted in the US accounting for a large share of the North American market in 2014. According to the Centers of Disease Control (CDC), around 22.3 million people in the US were diagnosed with diabetes in the year 2013. (Biosensors are a key element in the glucose monitoring device.) However, presence of other alternatives for diabetes management, such as laboratory methods, is expected to limit market growth.

Asia Pacific is anticipated to witness significant growth during the forecast period. China and India are expected to spearhead growth in the region. The increasing number of people suffering from diabetes and government initiatives toward improvement of the healthcare sector are boosting the demand for glucose monitors (which use biosensors) in Asia Pacific region.

Increasing prevalence of chronic and lifestyle-induced diseases, rising demand for point-of-care (POC) testing or applications, growing geriatric population, and their application in nanotechnology are key growth drivers for the biosensor market. Rapid technological advancements and expanded application areas in medical science are also important growth influencers. In addition, the mounting demand for cost-efficient, disposable and user-friendly devices is likely to spur growth.

However, growth can be realised only after existing hurdles are removed. Reimbursement policies in healthcare systems, stringent regulatory requirements and high cost of R&D are among the major challenges.

Cardiac markers are the most dynamic POC application and are expected to witness several innovations and investments over the next five years, owing to the increasing number of people suffering from cardiovascular diseases and rising demand for instant diagnosis of these diseases.

The glucose biosensors industry is segmented on the basis of its end use in hospitals, homecare diagnostics and others including research institutes and diagnostics and clinical laboratories. The homecare diagnostics market for glucose biosensors is projected to flourish over the forecast period 2015-22. Ease-of-use, quick results and low costs of the tests are supporting market growth. On the other hand, hospital-based market is projected to grow at a significant CAGR of 10.3 per cent during this period. 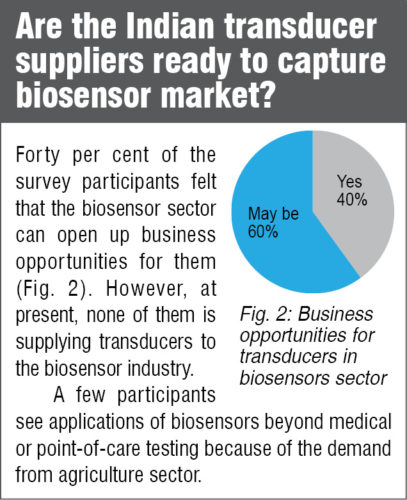 Based on the technology, the biosensors market is segmented into electrochemical, thermal, optical and piezoelectric markets.