Organic electronic devices have recently attracted great attention because these offer several advantages such as simple device structure, potentially low cost, and low power consumption. Researchers are currently working on egg white to build organic electronics as it is easy to process, readily accessible, and available at a lower cost.

Durability is often seen as a hallmark for high-quality electronic systems, but sometimes we need components that don’t last for a long period. For example, it would be handy if microelectronic systems that delivered drugs to various parts of the body dissolved after their tasks were over. Similarly, there are many electronic devices like sensors that should simply get dissolved after finishing their job rather than contaminating the environment.

The use of electronic devices has grown exponentially, and the United Nations estimates that people throw away about fifty million metric tons of electronics every year. 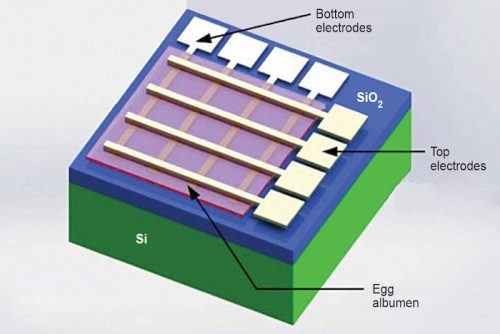 These materials have earned considerable attention in recent years. Biomaterials have the potential to cut the cost of organic electronics and simplify manufacturing processes.
Biomaterials are already used as semiconductors, dielectrics, and substrates in bio-organic field-effect transistors (BiOFETs), but these materials are not always easy to handle and may require many extraction steps. Egg, a well-known dietary and cosmetic supplement, is now advocated as biodegradable, biocompatible, and environment-friendly material towards bioelectronics.

Therefore egg albumen can be a promising alternative to the conventional silicon-based non-volatile memory systems. It may also have potential applications in the imitation of biological memory behaviour, artificial intelligence, and brain-like intelligence because of the good compatibility.

Researchers have recently figured out how to create one such chip out of eggs. They demonstrated that egg albumen-based resistive memory compares favourably to other memories, exhibiting a high on/off resistance ratio as well as good retention and switching endurance even after repeated bending.

To overcome such problems, researchers and scientists have extensively investigated potential non-toxic biomaterials as substitutes over the last two decades. Biomaterials are biodegradable, bioresorbable, biocompatible, and environment friendly. More importantly, complicated chemical synthesis is not required to prepare natural biomaterials.

Previous reports have suggested several promising biomaterials to prepare organic-based electronic and optoelectronic devices with deoxyribonucleic acid that can serve as excellent electron-blocking layers in both green and blue organic light-emitting diodes.

A number of protein-based materials have successfully been utilised to fabricate resistive-type memories. For example, the cationic poly (allylamine hydrochloride) (PAH)/ferritin nanoparticle multilayer structure, which is prepared via layer-by-layer assembly, was recently demonstrated as a possible biomemory device with reliable switching property.

The electrochemical property of redox proteins was identified as the principal cause of reversible resistance-switching. The natural silk fibroin protein extracted from the cocoons of Bombyx mori (silkworm) has also been used as an active component of transparent bio-memristors. Gold (Au) nanoparticles embedded in silk fibroin protein have been used to improve the switching property.

However, most of the above-mentioned approaches involve complicated chemical processes, such as extraction or purification, which inevitably increase fabrication costs and method complexity.

To overcome many of such problems with the fabrication of biomaterials, researchers have come with the idea of fabricating and characterising non-volatile resistive switching memory devices by utilising chicken egg albumen obtained directly from fresh eggs without additional purification or extraction.

The proposed devices feature a simpler fabrication process as well as superior switching properties and reliability compared with most previous approaches.

Researchers have used cellulose as a dielectric layer in an inverter circuit and shellac as a dielectric in OFETs. Many other biological materials can be transformed into suitable dielectrics, including aloe, silk, and egg whites. Some other dielectrics with more exotic properties like hydrophobicity are also made from beeswax and carnauba wax.

Researchers are exploring to build OFETs in hard gelatin capsules or on caramelised sugar for biomedical applications. They are working on conductive, 3D-printable gelatins that could be used to make circuits for sensors that could be swallowed.

Egg white, also known as egg albumen, has very good dielectric properties along with high transparency and high elasticity. It is an ideal material for organic electronics as it is easy to process, readily accessible, and available at a lower cost.

Heat transforms albumen from a soluble liquid to an insoluble solid as its proteins undergo thermal irreversible denaturation, unfolding from linear chains to form networks.

The new research marks that egg albumen can be used to make resistive memories that operate based on changes in resistance rather than electric current as a next-generation alternative to the silicon-based memories that dominate today’s electronics. These resistive memories will have potential advantages such as higher speeds, higher densities, and smaller sizes.

Albumen’s dielectric constant is higher than that of most polymers used in OFETs, making it a potential insulating material. This is not the first time that egg albumen has been incorporated into electronic devices, but previously also the albumen from chicken and duck eggs has been used in transistors and other devices as the dielectric (insulating) layer.

In a recent study, researchers have found that on mixing egg albumen with hydrogen peroxide, a series of chemical reactions occur that transform the biomaterial into an active film useful to make transparent, flexible resistive memory devices. Scientists have already developed a simple and low-cost fabrication process to make an albumen dielectric layer for OFETs. First, by separating egg white and yolk using a mesh spoon. Then, by creating a thin albumen film by spin-coating it onto a pre-patterned indium tin oxide substrate.

To obtain a smooth and dense dielectric film, the substrate is heated gradually from 80 to 140 degrees Celsius in a vacuum chamber by adding a layer of organic materials and depositing a metal layer through shadow masks.

The dielectric film is one of the main components of resistive memories, and here egg albumen-based film is used, which is normally insulating but can be made conducting by applying voltage. Switching between the states of high and low electrical resistance corresponds to switching between the memory’s ‘off’ and ‘on’ states, respectively.

The researchers have been able to demonstrate that the resistance of egg albumen material can be made switchable by mixing it with a ten per cent hydrogen peroxide solution. Egg albumen contains more than forty different proteins that are linked together by weak chemical bonds, and deep inside these proteins are large numbers of iron, sodium, and potassium ions.

These ions such as Fe3+, Na+, and K+ are always connected with protein chains in the chicken egg albumen, and so cannot work efficiently when charges are injected. But on treating with ten per cent hydrogen peroxide solution, ions are exposed outside of protein chains. Thus, the resistive switching memory properties of hydrogen peroxide-modified egg albumen film are efficiently improved compared to those of pristine egg albumen. The hydrogen peroxide easily breaks the bonds that are holding proteins together. This denatures proteins and critically exposes the ions.

Research teams have experimented with different materials to produce dissolvable electronics, including DNA, other types of proteins, and metals, but now the egg-based memristor is developed by researchers. An electronic device made of egg protein albumin has been created by researchers, paving the way for dissolvable sensors that could be used inside the human body.

The device, known as the memristor or memory resistor, is used to regulate the flow of electric current and can also remember charges. It has magnesium and tungsten-based electrodes that are incorporated on a thin film of albumin, a protein found in egg whites.
When used in dry laboratory conditions, the device’s performance remained consistent for more than three months, but in water, however, it dissolved almost completely within three days. The ability of this biomaterial to dissolve without trace shows promise for possible medical applications.

In summary, albumen functions well as a low-cost dielectric material for OFETs. Chicken albumen as a biomaterial can be used as the gate dielectric in OFETs. The albumen does not need further extraction or purification and is easily obtained, processed, and less expensive than other biomaterials for OFET devices. The entire process for preparing albumen dielectric uses properties of natural albumen without synthesis.

Albumen’s dielectric constant is higher than that of most polymers used in OFETs, making it a potential insulating material. Albumen dielectrics are also suitable for fabricating flexible OFETs, which are lighter and more durable. Such devices have many more potential applications than those with glass substrates, particularly for portable electronics. Research suggests that albumen dielectrics work well in flexible OFETs and complementary inverters.