Precision has always been one of the five most important attributes of a weapon, with operational range, striking power, volume of fire and portability being the other four. The state-of-the-art precision-guided munitions (PGMs) combine all these attributes to make them a potent force multiplier in the contemporary battlefield. Emergence and subsequent maturity of PGMs, made possible mainly due to advances in electronics, optoelectronics and optics, is one of the most significant developments of modern warfare. Let us discuss the various guidance techniques employed in this class of weapons.

PGMs, also called smart munitions, belong to the group of advanced fire-power munitions which mainly include projectiles fired from land or ship based military platforms, surface-to-air and air-to-air missiles and aerially-delivered bombs. These weapons employ one or more guidance techniques to hit the target more precisely with minimised collateral damage than would be possible with conventional unguided weapons. Launched from a variety of military platforms, including land vehicles, aircraft, ships and submarines, these weapons exemplify the concept of a low-cost threat, forcing a high-cost and complicated defence mechanism. 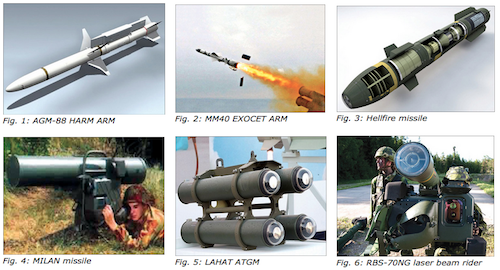 Though the concept of PGMs was first envisaged during World War I, the scientific and technological capability of that time did not allow it to become a practical reality. This weapon arrived on the battlefield in a rudimentary yet significant form during World War II. It was the success and experience gained during the Korean and Vietnam conflicts, and then the Gulf war, that established the efficacy of precision-strike weapons.

This class of weapons has come a long way from the era of World War II, when the guided-weapon was characterised by a circular error probable (CEP) of about 1000 metres to the state-of-the-art precision-strike weapon with CEP of less than a metre.

New guidance mechanisms are being developed to further enhance the precision of these weapons. More than one guidance technologies are being employed to make them all-weather weapons and eliminate the possibility of a mis-hit. Use of GPS/INS in conjunction with other guidance technologies, such as radar or electro-optic guidance, is an example.

Joint direct attack munitions (JDAM) is an important manifestation of the use of multiple-guidance technologies. The capability of a modern precision weapon has progressed from targeting a specific building to hitting a specific room. Soon the next generation technologies will turn the foot soldier, with an advance chip in his boot, into a precision strike weapon, able to navigate without GPS and fire guided bullets at targets like would-be snipers before they have a chance to fire at him.

Anti-radiation weapons. Anti-radiation weapons (ARMs) are designed to target ground based radars. These do so by detecting radio emission from the radars and then homing onto the source of radio emission. These weapons can also be used to target jammers and radios used for communication. Air-to-surface, surface-to-surface, surface-to-air and air-to-air variants of ARMs are in use. A common deployment of these weapons is in specialist aircrafts meant to target ground based radars in suppression of enemy air defence (SEAD) role.

AGM-88 anti-radiation missile (HARM) of the USA is an example of air-to-surface anti-radiation weapon (Fig. 1). Surface-to-surface ARM, such as MM40 Exocet (Fig. 2), employs an active radar seeker, whose receiver component is used to home onto the radar. These missiles are extremely hard to defeat with electronic countermeasures.

Surface-to-air ARMs are used to target airborne early warning (AEW) and airborne warning and control systems (AWACSs). FT-2000 system of People’s Republic of China is an example. More recently, air-to-air ARM designs have also begun to appear on the scene, such as the anti-radiation Russian Vympel R-27P. Such missiles do not trigger any radar warning receivers and therefore are relatively immune to countermeasures.