Architecture and working
An RFID system consists of three components: transceiver (often combined into the reader), some sort of data processing equipment, such as a computer, and a transponder (the tag). A typical RFID system is shown in Fig. 1.

RFID tag. RFID tag, usually known as transponder, acts as a transmitter as well as a receiver in the RFID system. The three basic components of the RFID tag are an antenna, a microchip (memory) and the encapsulating material. 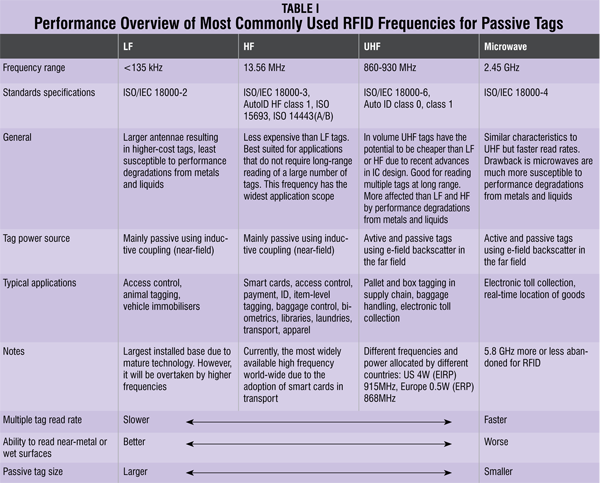 In a typical system, tags are attached to objects. Each tag has a certain amount of internal memory (EEPROM) in which it stores information about the object, such as its unique ID (serial) number, or in some cases more details including manufacture date and product composition.

When these tags pass through a field generated by a reader, they transmit this information back to the reader, thereby identifying the object. The antenna uses radio frequency waves to transmit a signal that activates the transponder. When activated, the tag transmits data back to the antenna. The data is used to notify a programmable logic controller that an action should be taken. The action could be as simple as raising an access gate or as complicated as interfacing with a database to carry out a monetary transaction.

Until recently, the focus of RFID technology was mainly on tags and readers which were being used in systems involving relatively low volumes of data. This is now changing as RFID in the supply chain is expected to generate huge volumes of data, which will have to be filtered and routed to the backend IT systems. To solve this problem, companies have developed special software packages called savants, which act as buffers between the RFID front-end and the IT backend. Savants are equivalent to middleware in the IT industry.

RFID reader. RFID reader is the device used to transmit to and receive information from the RFID tag. It is also referred to as an ‘interrogator.’ It includes sensors that read the RFID tags in the vicinity.

The reader sends a request for information to the tag. The tag responds with the respective information, which the reader then forwards to the data processing device. The tag and reader communicate with one another over a radio frequency channel. In some systems, the link between the reader and the computer is wireless.

Communication protocol
The communication process between the reader and tag is managed and controlled by one of several protocols, such as the ISO 15693 and ISO 18000-3 for HF, or the ISO 18000-6 and EPC 18000-6 for UHF. Basically, when the reader is switched on, it starts emitting a signal at the selected frequency band (typically 860-915 MHz for UHF or 13.56 MHz for HF). Any corresponding tag in the vicinity of the reader will detect the signal and use the energy from it to wake up and supply operating power to its internal circuits. Once the tag has encoded the signal as valid, it replies to the reader, and indicates its presence by modulating (affecting) the reader field.

Anti-collision. If many tags are present, they will all reply at the same time. At the reader end, this is seen as signal collision and an indication of multiple tags. The reader manages this problem by using an anti-collision algorithm that allows tags to be sorted and individually selected. There are many different types of algorithms (binary tree, aloha, etc) which are defined as part of the protocol standards.

The number of tags that can be identified depends on the frequency and protocol used, and can typically range from 50 tags/s for HF to 200 tags/s for UHF. Once a tag is selected, the reader is able to perform a number of operations such as reading the tags. This process continues under control of the anti-collision algorithm until all the tags have been selected.

[stextbox id=”info” caption=”Pros and Cons of RFID Technology”]Pros
1. RFID tags are rugged and robust and can work in harsh temperatures and environment. The RFID system works at a remarkably high speed, even in adverse conditions.
2. RFID tags are available in different shapes, sizes, types and materials. The information on the read-only tag cannot be altered or duplicated. Read-write tags can be used repeatedly. The RFID tags are always read without any error.
3. Direct physical contact between the tags and the reader is not required. RF technology is used for communication.
4. Multiple RFID tags can be read at the same time. The RFID tags can be read in a bulk of ten to 100 tags at a time. Reading of the tags is automatic and involves no labour.
5. RFID systems can identify and track unique items, unlike the bar code system which identifies only the manufacturer and the product type.
6. The entire RFID system is very reliable, which allows the use of RFID tags for security purpose.
7. The storage capacity of the RFID tags is greater than of any other automatic identification and tracking system.

Cons
1. The RFID system is costly compared to other automatic identification systems. The cost can increase further if the RFID system is designed for a specific application.
2. Size and weight of the tags is more as compared to barcode system. The electronic components like antenna, memory and other parts of the tags make them bulky.
3. Although the tags work in harsh environments, the signals from certain types of tags get affected when they come in close contact with certain metals or liquids. Reading such tags becomes difficult and sometimes the data read is erroneous.
4. There is no way in which damaged tags can be tracked and replaced with tags that are intact.
5. Although the tags do not require line-of-sight communication, they can be read within a specified range only.[/stextbox]

Capacitively coupled tags. These tags were created to lower the technology’s cost. These were disposable tags that could be applied to less expensive merchandise and made as universal as bar codes. Capacitively coupled tags used conductive carbon ink instead of metal coils to transmit data. The ink was printed on paper labels and scanned by readers.

Motorola’s BiStatix RFID tags. These were the frontrunners in this technology. They used a silicon chip that was only 3 millimetres wide and stored 96 bits of information. This technology didn’t catch on with retailers, and BiStatix was shut down in 2001.

Inductively coupled and capacitively coupled RFID tags aren’t used as commonly today because these are expensive and bulky. Newer innovations in the RFID industry include active, semi-active and passive RFID tags. These tags can store up to 2 kilobytes of data and are composed of a micro-chip, antenna and, in the case of active and semi-passive tags, a battery. The tag’s components are enclosed within plastic, silicon or sometimes glass. Table I gives the performance overview of the different-frequency passive tags.

1. Passive tags use the reader field as a source of energy for the chip and for communication from and to the reader. The available power from the reader field not only reduces very rapidly with distance but is also controlled by strict regulations, resulting in a limited communication distance of 4-5 metres when using the UHF frequency band (860-930 MHz).

2. Semi-passive (battery-assisted backscatter) tags have built-in batteries and therefore do not require energy from the reader field to power the chip. This allows them to function with much lower signal power levels, resulting in greater distances of up to 100 metres. Distance is limited mainly because the tag does not have an integrated transmitter, and still has to use the reader field to communicate back to the reader.