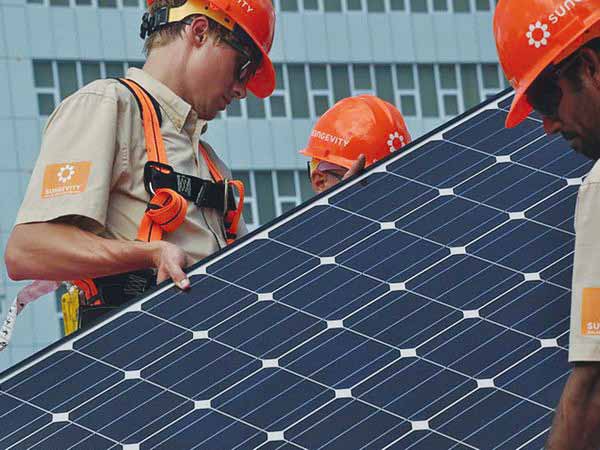 For organisations planning to shift from conventional energy to solar power use, a rooftop solar photovoltaic (PV) power plant can not only be a money saver but also money spinner

with excess power supplied to the utility grid. While the Ministry of New and Renewable Energy (MNRE) is still in the process of laying down specificationsfor incentives, experts feel that with the right policies and execution, solar rooftop installations can be a hot trend in green technology. It is a profitabl business concept, and hence a viable investment option.

Installation and Requirements
When solar PV modules are installed on a building’s rooftop to generate solar power, it is called a rooftop power plant. Rooftop PV installation can either be done for standalone use or to feed into the grid.

Some of the factors to consider before installing a solar power plant on your building’s rooftop include electrical load, current rate, roof size, load capacity and geographic location of the building. The subsidy given by the central and state governments, local utilities, and local community regulations and incentives are also some key determinants in the evaluation.

Rooftop solar arrays are best installed on a large and flatroof where direct sunlight without shadow from the surrounding structures is available. If there is shadow on a part of the terrace during the day, PV solar panels are unable to harvest the sun’s energy for that period of time. Let us look at the key considerations while evaluating solar rooftop options.

1. A set of PV panels that convert sunlight (photons) into direct-current (DC) electricity
2. A racking system that firml holds the panels to the roof, exposing these to the sun at an advantageous angle
3. Inverters that convert DC electricity into alternating current (AC) electricity
4. Wiring that connects everything
5. A storage battery (in the case of a grid-fed power plant, a large-sized battery is not necessary to store and use that power after sunset)
6. A variety of means to tilt the panels toward the sun to generate more electricity
7. Energy meters to record the en-ergy that is supplied to the grid
8. Junction boxes
9. Earthing kits

Currently, commercially available silicon-based solar PV panels are made from solar cells encased in a special type of toughened glass. Silicon solar modules have been in the fieldfor more than 50 years and perform quite predictably. These are guaranteed for 25 years of feld life but the power yield drops about 0.6 per cent a year. One can use monocrystalline (made from a single crystal) or polycrystalline (made from multiple crystals) panels. Monocrystalline panels are a little more efficientbut the cost per watt is almost the same.
[stextbox id=”info” caption=”How to supply solar power to the grid?”]

If the solar power generated from a rooftop installation is to be injected into the grid, one needs to enter into a power purchase agreement (PPA) with the local distribution utility in whose area the solar system is located. Under this agreement, a tariff is determined by the appropriate State Electricity Regulatory Commission (SERC). However, the issues related to grid integration, metering, measurement and energy accounting for projects are under consideration with the government.

There is no cost involved in the transmission of energy unless the power is transmitted at high tension (HT) levels (11 kV or 33 kV), and special monitoring and metering hardware are deployed at HT levels. In the current scenario, metering arrangements for rooftop grid-interactive power plants are under active consideration by the government.

While no special arrangements are required to inject power into the grid, there is a safety aspect that needs to be factored in while transmitting energy. There is always a risk involved, as when the grid fails the solar power system automatically stops injecting power into the grid. This is called islanding, where the inverter isolates itself. This is a standard feature built into solar power inverters, making these safe for residential and commercial applications. A standalone feature in the inverter would enable captive consumption of the solar power generated in the event of any grid outage.

Copper-indium gallium-diselenide (CIGS) panels may become the preferred type for commercial rooftop projects in another fiveyears. These have the potential to deliver reasonable efficienciesat a lower cost than traditional crystalline panels. However, the cost per watt may not necessarily go down, only the panel size per watt may drop. Today, solar panels (depending on the brand) are bankable, that is, banks loan capital for their purchase.

How Can Solar Panels Reach Their Potential?