Powering base transceiver sites is a challenge that spooks the telecom industry. Here is a simulator that helps operators arrive at the perfect combination of grid power, solar Pv, diesel generator and batteries to provide sustainable uninterrupted power to base stations at optimal costs -- Janani Gopalakrishnan Vikram

Gone are the times when telecommunications infra-structure was confinedto telephone exchanges. With the advent of mobile communications, base stations are almost everywhere. In India, there are over 400,000 sites hosting base stations. All these base trans-ceiver sites (BTS) need to have uninterrupted power supply. Each BTS consumes a few kilowatts of power to run not just the electronics but also the cooling equipment.

Grid power in India is available at a tariff of ` 5 to 6 per unit. If this were the predominant source of power, the cost of fuelling a BTS would not be too high. However, India is plagued by power cuts, which could last two to eight hours a day in urban areas and up to 20 hours a day in rural areas. Further, almost 18 per cent of BTS sites in India are off-grid. All this makes backup power systems critical to the functioning of a BTS.

Bye-bye, band-aid backup
In most cases, power backup at base stations is implemented in an ad-hoc fashion, without much scientificplanning. Therefore operational expenditures (OPEX) skyrocket beyond control, and the benefis of renewable energy sources such as photovoltaic (PV) cells are not accrued. 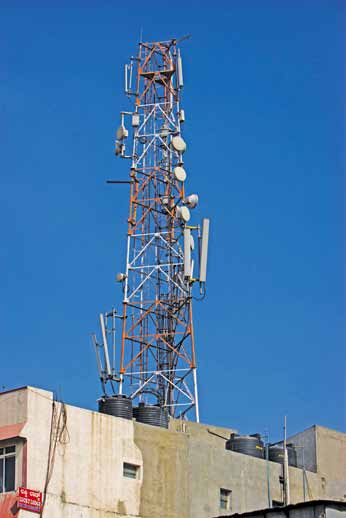 The Indian telecom industry consumes more than two billion litres of diesel and emits over fivemetric tonnes of carbon dioxide. Energy, power and fuel amount to more than 30 per cent of the total network OPEX. If the telecom infrastructure is to expand in a sustainable fashion, operators will have to turn to an optimal mix of power options that includes renewables also.

Sadly enough, there are not many tools available to help operators configure the power supply for a base station, since developed nations—the so-called forerunners in the technological evolution—have uninter-rupted and ubiquitous grid power. For an indigenous problem, we need an indigenous solution.

A team headed by Padma Shri Dr Ashok Jhunj-hunwala at the Reliance-IIT Madras Telecom Centre of Excellence (RITCoE) has risen to the occasion and developed a simulator that helps operators arrive at the optimal mix of power options for their base stations.

A fresh look at an old problem
RITCoE’s report ‘Powering Cellular Base Stations: A Quantitative Analysis of Energy Options’ is a fresh, new approach, since it does not make any assumptions about the suitability of any source—be it batteries, diesel generator (DG) sets, solar PV cells or grid power. It relies on a sophisticated simulator developed by the team, which takes as input several location-specificparameters such as the required power level, temperature profile,grid availability profile,and relative costs of DG, solar PV and battery power, and uses that to arrive at an optimal power backup plan for that site.

The solution is practical, flexibl and future-proof. Operators can use it to not just optimise capital and operational expenditure but also compare the performance of implementations at various locations, retrofitolder base stations to reduce power requirements (especially for cooling), perform what-if analysis to see how the optimal mix would change when grid supply changes, and so on.

[stextbox id=”info”]The simulator takes as input several locationspecific parameters such as the required power level, temperature profile, grid availability profile, and relative costs of DG, solar PV and battery power, and uses that to arrive at an optimal power backup plan for that site[/stextbox]

In the process of writing this report, the team took hundreds of typical base station configuration into account. This exercise not just validated the efficiency of the simultor but also helped the team to come up with some broad recommendations about the proper mix of power options, the way ahead and aspects that need to be improved in the coming years.

Dr Jhunjhunwala says, “The simulator is not country-specific,though the user-cases discussed in the report are. As and when there is a requirement, new features will be added.” He also confirmsthat they would be licensing the simulator tool for use by third parties at a low cost. They are yet to finalise the terms for the same.

The complete report is available online at http://tcoe.in/download/1/Download-Section_190/1/1.html