The launch of Bluetooth 4.0 was a revolution. All of a sudden we had wireless transfer technology that consumed drastically less power while performing better in terms of range and capacity. As for Wi-Fi, we have the ever-trustworthy 802.11x standards with constant increase in speed over the years—802.11ah is an improvement over the earlier 802.11ad, which itself is under development. It can also penetrate walls and other barriers considerably better than previous Wi-Fi standards.

For a holistic picture, we need to look at the improvements over the years. Increase in performance has been coming at the cost of exhaustive power consumption. So let us look at how power can be reduced in devices while increasing performance. Bluetooth 4.0 or Bluetooth Low Energy (BLE) allow reduction in power without any compromise in performance.

An area of signi cant improvement has been the usage of modules with power- saving features, especially when the system is idle. In such modules, standby power consumption typically ranges between 1.9mA and 5.7mA, which is ideal for battery-powered systems. Modules that go into sleep mode when wireless transmission is inactive provide the ability to power individual blocks on the board, like the transmitter or the DSP and, hence, help hugely in improving performance. 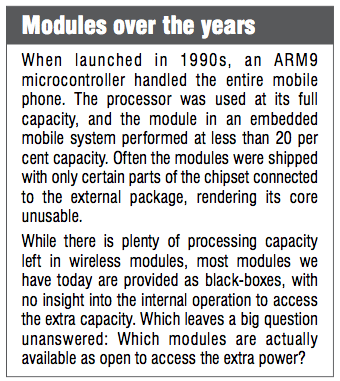 Power consumption protocols in BLE consume only a fraction of the power purged by earlier versions. This is not done by sacri cing on signal strength, but by al- tering the duty cycle. It is optimised for small bursts of data where continuous use actually makes the device consume more power. Transmitting via bursts does not cause loss in data but allows you to save power. This data is then transmitted via the antenna, which is another major player in wireless per- formance. A conventional nite ground coplanar waveguide, for example, can be modi ed to obtain wide-band response at desired frequencies.

The receiver plays a big role.

Wireless performance can be directly increased by increasing transmitting power, but that would not be productive. Increasing the transmitted power will get you longer range but could also lead to multichannel signal interference. Also, load on a mobile battery would cause it to be consumed in a matter of few hours.

Sensitivity of the wireless receiver can, however, be increased to make a change in this regard. Theoretically speaking, increasing the sensitivity by 6dB doubles the range for reception.

Optimising the communication receiver design leads to compromise on certain other parameters. A super-heterodyne receiver, for example, may require ltering signals between the antenna and the front-end mixer to prevent interference from unwanted sources. Here lies the problem. Once you introduce a narrow-band filter, a signal loss corresponding to receiver noise gure is also introduced. Adding a preampli er could compensate for the lter, while lowering the noise gure.

This, on the other hand, brings along its own set of inter-modula- tion problems, resulting in possible degradation of mixer performance. There is still a possibility to optimise key parameters like sensitivity and dynamic range. Since adding the preampli er results in inter-modulation problems, it creates speci c design challenges.

Traditionally, high linearity and low noise in high-frequency applications was achieved by frequency applications that used gallium arsenide (GaAs) or indium phosphide (InP) gain blocks. This could become a serious problem in battery-powered or low-voltage applications because of high power dissipation. A more practical method is to improve the characteristics of the antenna and its installation to improve transmission ef ciency of the overall system.

Characteristics to be considered for antenna design include frequency of transmission, input impedance, antenna gain, polarisation and radiation pattern. Provision of detachable antenna in a receiver allows you to use different types of antennae for optimal reception. 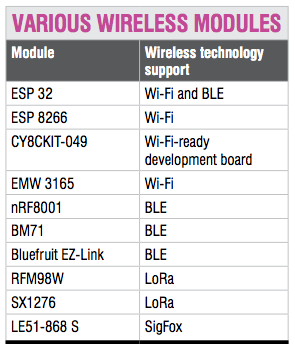 What is next in wireless

Today’s wireless systems use non-chaotic wireless signals, ranging over satellite communications, GPS navigation, mobile phones and Wi-Fi devices. These have a well-defined period and frequency, which causes physical impediments with wireless signals
in open spaces. A study done a couple of years ago proposed chaotic signals for overcoming some of the constraints faced by wireless devices to improve performance. An added advantage was that these allowed designing of low-power, low-cost and small-area electronic circuits.