There is a lot you can do with 3D printing. You can create doll houses and toys for your children, or decorative objects for your home. You can print chocolate in various shapes. Real food, like pizzas, can be printed in outer space, auto components can be economically and quickly printed, and limbs and other implants hastily created. Although most 3D printers are custom-made or sold with a heavy price tag today, things are on the verge of changing. In the coming years, a 3D printer will become one of those objects that we will own—simply because it does exciting things! How exciting? That’s the question we attempt to answer now.

Made for space, in space

Building things in outer space is a huge challenge as spaceships cannot carry the weight of equipment along with the raw materials. The way out is to 3D print all the stuff in outer space itself. California-based Made in Space (MIS) has shown that it is possible.

MIS owns and operates the Additive Manufacturing Facility (AMF)—a fully-functional 3D printing set-up that reached the International Space Station (ISS) in March 2016, and has since been producing various parts for MIS’ customers. But, why would one want to produce parts in outer space? The company believes that the space environment is unique, with its persistent microgravity and vacuum conditions. Manufacturing and assembling components in space widens design possibilities and enables one to extend the life of existing on-orbit assets or entirely new structures.

Take the example of optical fibre. The company claims that when exotic optical fibre is produced in a strong gravitational environment, such as Earth, it is subject to some flaws. Tiny crystals appear in the fibre and significantly increase signal loss.

According to them, “In space, ZBLAN optical fibre can be produced without these crystals, providing superior data transmission capabilities compared to both Earth-produced ZBLAN and traditional silica fibre optic lines. This microgravity-produced fibre has numerous applications, including transatlantic telecommunications, high-speed Internet, lasers, as well as enhancing technologies in space.”

MIS proved the possibility by launching a miniature fibre-pulling machine called MIS Fiber, with a payload of ZBLAN preforms supplied by Thorlabs. After being set-up on the ISS, MIS Fiber, remotely operated from Earth, successfully produced high value-to-mass ZBLAN fibre. It returned to Earth with its produce. 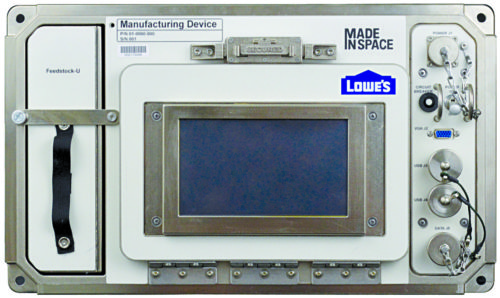 As a next step, MIS is now developing Archinaut, which adds robotic arms to their manufacturing set-up so that the parts produced can also be assembled in space. This can be used to build new structures or to repair existing satellites and other space structures.
3D printing in space has some palatable uses too. BeeHex, a start-up funded by NASA, has developed a 3D printer that can print pizzas with edible ink. Astronauts need to choose the size, dough, topping and cheese, and the printer gets to work depositing layer after layer of ‘ink’ to create a pizza which is then baked in a 400-degree pizza oven. The pizza gets ready quite fast with minimal user intervention, so the company hopes that eateries on Earth will also utilise their tech!

The ultimate in JIT inventory

Moving beyond the hobbyists’ zone, 3D printing is now well-rooted in industrial spaces too. The ability to manufacture the required parts just when these are needed could mean the next generation of just-in-time (JIT) inventory management. Automakers and others would no longer have to depend on vendors to meet their commitments.

Volkswagen Autoeuropa, an automobile manufacturing facility, has seen such benefits by using Ultimaker’s desktop 3D printers to produce custom tools and parts, like gauges, jigs and fixtures. This is just a desktop 3D printer and not a large-scale industrial one, yet the benefits are clear. In a press report, Autoeuropa shared how they were able to 3D print a wheel-protection jig for around $20. Had they gone to a vendor, the process could have cost more than $850. By printing around a thousand parts, they claim to have saved $160,000 in 2016.

Apart from reducing cost and improving customisation and productivity, 3D printing allows unlimited and on-demand design revisions, faster lead times and increased accessibility. Since only desktop 3D printers have been used by Volkswagen, the investment is quite low compared to the savings. It is also easy for workers to learn, and quite scalable.

When it comes to mass manufacture of plastic parts, experts feel that 3D printing is not as economical as injection moulding. So, it is likely to be used only for customised parts. However, when it comes to printing metal parts, it could be a game changer.

At CES 2017, Greg Mark, CEO of Markforged, showed off the Metal X desktop printer, which can print using metals like 17-4 stainless steel, 303 stainless steel, 6061 aluminium, 7075 aluminium, A-2 tool steel, D-2 tool steel, IN alloy (Inconel) 625 and titanium Ti-6Al-4V. The designs are printed in metal powder surrounded by plastic, then the plastic is dissolved and the metal sintered, leaving behind a strong metal part.